Volkswagen’s all-electric ID. Buzz MPV is now available to order in the UK, with three variants and up to 258 miles of range 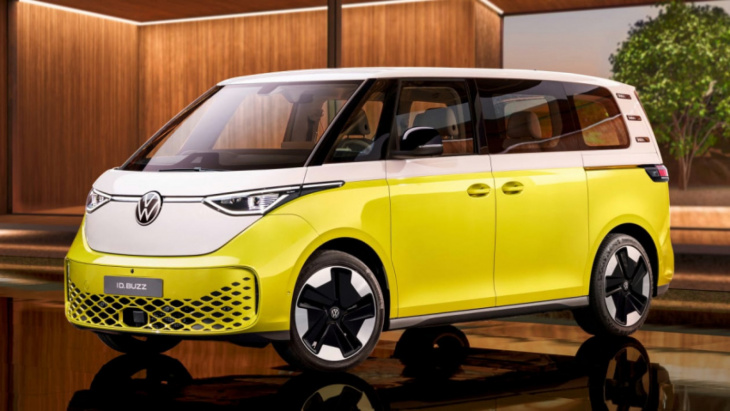 Buyers can now order the Volkswagen ID.Buzz in the UK, with the entry-level Life version priced from £57,115. The brand’s all-electric people carrier is available in three trim levels – Life, Style (£61,995) and top-spec 1st Edition at £62,995, with the retro-themed machine offering up to 258 miles of range.

The German firm has also previously revealed it is planning on bringing its sporty GTX moniker to all of its all-electric ID cars – including the new ID.Buzz, which will line-up as a unique proposition: a hot, all-electric minibus, so expect a fourth variant to join the line-up in time.

The GTX will sit at the top of the range but as the car has not yet been officially confirmed, pricing will be a while off.

The battery size likely won’t change from the other trim levels so we’ll see the same 77kWh battery in the ID.Buzz GTX. In the ID.5 GTX, that battery is linked to a 295bhp and 460Nm electric motor set-up. Given the ID.Buzz uses a the same MEB platform to the ID.5, we expect to see similar numbers in Volkswagen’s hot electric MPV.

The ID.4 GTX and ID.5 GTX utilise two electric motors (one on each axle) to provide four-wheel drive so we expect the same in the ID.Buzz GTX. Just like the ID.4 and ID.5 GTX models, range will likely decrease with the battery focusing more on performance.

Elsewhere, the exterior will probably feature a few small nods to the added sportiness and the interior should have some red touches – as seen on previous GTX models.

For now, every model in the ID.Buzz range features the same running gear as the ID.3. That means a 77kWh battery, sending 201bhp and 310Nm of torque to the rear wheels. This should change with the inclusion of the hot GTX model, as we expect more power and four-wheel drive. Volkswagen claims the ID.Buzz is capable of an all-electric range of up to 258 miles.

There’s 170kW charging on board, so the battery can be charged from five to 80 per cent capacity in 30 minutes from a powerful enough DC source. What’s more, the ID.Buzz features bi-directional charging, so not only will owners be able to charge the car at home, they’ll also be able to feed energy from the battery back into the grid.

The production version of the ID.Buzz remains largely unchanged from the concepts that we’ve seen since 2017. It’s a fairly standard one-box minivan shape with a rakish windscreen, while VW claims a drag coefficient of 0.29Cd to help boost efficiency. 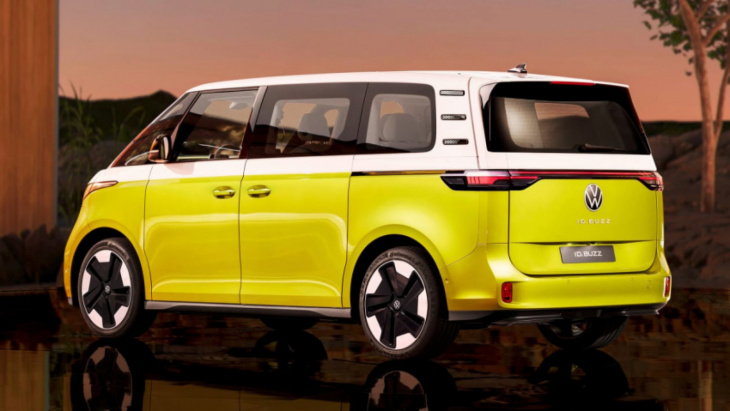 There are slender LED headlights on the range-topping 1st Edition variant up front with a light bar stretching between them to connect with the large VW badge in the middle, while lower down is a mesh grille design for the lower air intakes. Sliding side doors feature, while the rearmost pillars use a three-bar design motif.

A full-height tailgate can be found at the back with slender lights across the full width of the rear end. The two-tone colour scheme seen in the first official pictures will be offered as an option, with yellow, orange, blue or green bodywork beneath a white upper section. 21-inch wheels are available exclusively for the 1st Edition.

Overall the ID. Buzz is relatively compact. At 4,712mm long it’s 192mm shorter than the T6 Caravelle, but has a wheelbase of 2,988mm, which is almost identical to the T6. This helps to maximise passenger space, but while the concepts featured clever sliding and rotating seats, the ID. Buzz has a conventional five-seat layout in a 2-3 configuration. The rear bench splits 60:40 and slides to maximise legroom or cargo space, though, and there’s a vast 1,121 litres of boot space in five-seat mode. Fold the rear bench flat, and a maximum of 2,205 litres is on offer.

Go for a two-tone exterior, and the cabin will have the same colour theme, although we’ll have to wait and see how easy it will be to keep the white steering wheel and upholstery looking good. Practical touches include up to eight USB-C charging sockets throughout the cabin, while a new innovation is the ‘Buzz Box’. This is a central storage bin that sits between the front seats and contains a top compartment housing an ice scraper and bottle opener, bottle storage and a large five-litre drawer for storing bulkier items. 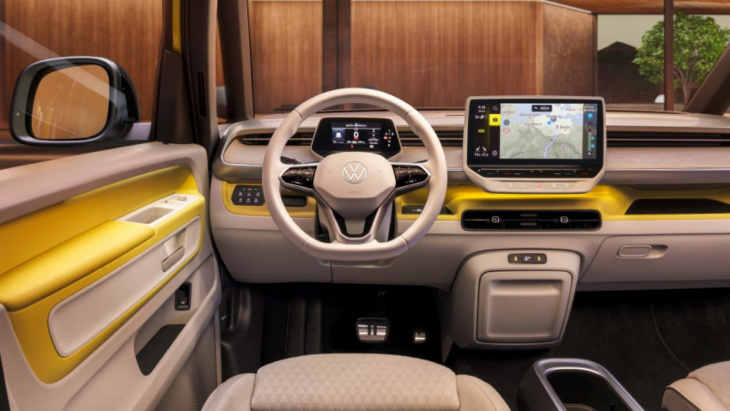 Another innovation of the cabin is the elimination of leather upholstery. The steering wheel is wrapped in a synthetic alternative, while the carpets and seat fabrics all come with varying levels of recycled plastic within them. It’s part of VW’s aim to make the ID. Buzz carbon neutral all the way from manufacture to delivery.

There’s plenty of technology on board the ID. Buzz, and most of it is carried over from the ID.3 and ID.4. There’s a 5.4-inch Virtual Cockpit driver’s display, while a 10-inch touchscreen infotainment system feature on the Life model, the higher-spec models get a 12-inch screen mounted centrally on the dashboard. As with other ID models, touch-sensitive climate controls feature, while wireless Apple CarPlay and Android Auto, online connectivity and voice control all feature.

Production of the ID. Buzz begins later this year and order books open officially in July 2022.


View more: What Will Be Different With the 2023 Volkswagen Atlas?

Volkswagen says it signed a memorandum of understanding (MoU) Friday with Ellia Group to explore V2G technology and how it can potentially help stabilize the energy grid while rewarding EV drivers. Vehicle-to-grid (V2G) technology has immense potential as more electric vehicles hit the road. EV chargers and the technology ...

The Gen.Travel is billed as “an outlook for mobility of the coming decade” that could one day provide an alternative to short-haul flights

Starting in the fall, Volkswagen and customers in select regions can schedule an in-person Alexa-guided test drive of Volkswagen’s ID.4 SUV. Following a brief walk-around of the vehicle with a Volkswagen Product Specialist, participants will embark on a real-world test drive with Amazon Alexa as their companion. The Alexa ...


View more: Everything that you need to know about the Volkswagen Polo Sedan