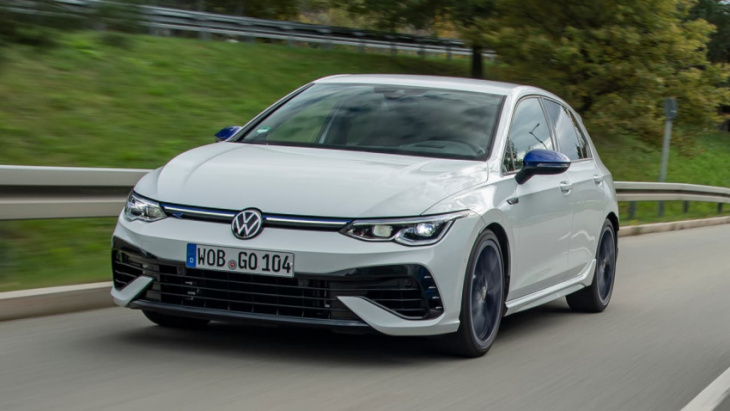 Well, to give it its full name, it’s the Mk8 Volkswagen Golf R ‘20 Years’ edition. It’s here to celebrate (you guessed it) two decades since VW launched its first ever R-badged car – the Mk4 Golf R32.

It’s not just blue wheels and badges either, because this is a special edition with some actual mechanical differences compared to the standard car that it’s based on. Rather than the usual Mk8 R’s 316bhp, the 20 Years gets 328bhp from its 2.0-litre turbo engine, making this the most powerful production Golf ever made.

And no, the 641bhp Golf W12 does not count in that particular argument.

Yep. Feel old yet? The original R32 set the recipe for all future R models, with 4MOTION all-wheel drive, an optional DSG gearbox and a healthy 238bhp (although that power came from a beefy 3.2-litre V6 shoved under the bonnet as opposed to the four-cylinders we get today). It also looked wicked in blue and sported a youthful bodykit, both of which still apply to the Mk8 R.

What else do I need to know about the 20 Years edition?

The first thing to note is that the 20 Years gets the Mk8’s Performance Pack as standard. That means larger 19-inch wheels, a pronounced rear wing and – perhaps crucially – some extra lines of code that allow for two more driving modes. They’re Drift mode and Special mode, with the latter getting soft suspension and lots of Nürburgring graphics to show you where you should be using it.

Turns out this thing is rather speedy around said circuit too, because back in August of this year VW announced that the 20 Years had set a Nürburgring lap time of 7m 47.31s. Not slow. In fact it’s the quickest production R model ever to set a time (again, the ID.R does not count in this argument).

Go on then, does it feel any different to drive?

Well, given that we were on the streets of Munich rather than the Nürburgring it was hard to tell much difference from the standard, Performance Pack-equipped R. However, VW does say that it has programmed in some extra thump into the gearchanges for the 20 Years, and although the DSG ‘box still slots gears home smoothly there is a slight sense of more excitement when you ramp up the gearbox to Sport+ mode.

Having the Performance Pack also means that you’re able to switch the gearbox into a proper manual mode, and on full-throttle upshifts near the top of the rev range you might feel a little more action that in the standard R.

With 328bhp being shuffled to all four wheels the 20 Years does feel rapid, but then the standard car is hardly sluggish. VW says that engine response has been improved by 30-40 per cent in this special edition thanks to the turbo being constantly spooled up, but you’d have to be really pressing on to notice, and the racier modes in the standard car provide a similar feeling.

Is the interior different at all?

There are a few things inside that mark this out as a special Golf, the headline being real carbon fibre trim on the dash and the doors. There’s Nappa leather seats front and rear as standard too, although we’d have to admit that the cloth seats in the standard R are particularly nice.

How much will the 20 Years cost me?

Here’s the kicker – the 20 Years starts at £48,095 in the UK, whereas prices for a standard Mk8 Golf R kick off at £42,695. And it’s not like you get all your usual optional extras thrown in for free with the special edition. Things like the Akrapovic exhaust (£3,500), the head-up display (£680), the panoramic roof (£1,060), adaptive suspension (£850) and a rear-view camera (£320) are all still boxes that you’d need to tick on the configurator. That puts the 20 Years well above the £50k mark, and to make matters worse VW has scrapped the £2,000 Performance Pack option for the standard car, so this is currently the only way into a very-expensive drifty Golf.

Should I buy one?

Well, the 20 Years is now technically the ultimate Golf, but if we’re honest the extra cash over a standard R is hard to justify. Plus, we’re still smarting over the Mk8’s interior wobbles and haptic-feedback nonsense, so a used Mk7 R is where our money would go.