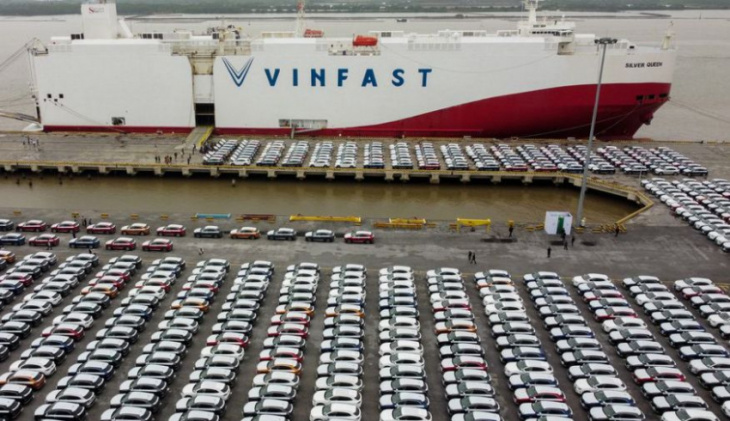 Vinfast EV cars are seen during a car shipment to the US in Haiphong today. — Reuters

HAI PHONG: Vietnam’s electric vehicle maker VinFast said today it had shipped its first batch of 999 cars to the United States, capping a five-year bid to develop an auto production hub in the South-East Asian country for markets in North America and Europe.

The first cars are expected to be handed over to customers by the end of December, the company said.

VinFast chief executive Le Thi Thu Thuy said some of the VF 8 electric SUVs being shipped today would be sent to US car subscription service Autonomy but the majority would go to retail buyers who have ordered the car.

Thuy said VinFast expected to be able to ship a second batch of cars to the United States, its first export market, around January.

VinFast is in the process of building an electric vehicle plant in North Carolina that is awaiting final regulatory approval from local officials.

Thuy said the company expected to start production at the North Carolina factory from July 2024 and that electric vehicles built there would qualify for incentives under the terms of the Inflation Reduction Act signed by US president Joe Biden.

The Inflation Reduction Act, as currently written, requires automakers to have 50% of critical minerals used in EV batteries come from North America or US allies by 2024, rising to 80% by the end of 2026.

Major automakers have said those targets are unrealistic and it was not immediately clear how VinFast would meet the sourcing requirements.

“The IRA came as a surprise to all of us but it doesn’t really impact our strategy in the US,” said Thuy.

“As soon as we start manufacturing cars in the US, our customers will be eligible (for) the tax incentive.”

VinFast said last week that Autonomy had ordered 2,500 electric vehicles, its largest corporate order to date. VinFast has said it has almost 65,000 orders globally in total and expects to sell 750,000 EVs annually by 2026.

The North Carolina factory project is running months behind schedule, based on the company’s initial targets, and the first shipment of EVs built by VinFast was short of the initial goal to deliver as many as 5,000 cars built at its factory in Haiphong by December.

VinFast officials said the number 999 for the vehicles shipped in the first batch had been chosen because it is considered a lucky number in Vietnam.

The Panamanian-chartered transport ship used to send the first shipment of VinFast EVs had the capacity to carry up to 2,000 vehicles, officials said.

Shares in VinFast’s listed parent company, Vingroup, which also has property and resort development businesses, were up 5.41% this morning.

Volvo CEO Jim Rowan has confirmed plans for a new entry-level model to journalists. The small all-electric SUV will be called the EX30, as suspected, and is due to launch in 2023. According to Rowan, the EX30 will be built in China. However, it is not known how small ...


View more: VW launches software update for the ID.4 in the USA

An electric vehicle charging station of VinFast. (Photo courtesy of the company) Hanoi (VNA) – VinFast Trading & Investment Pte. Ltd. (VinFast) on December 7 announced that it has publicly filed a registration statement on Form F-1 with the US Securities and Exchange Commission (SEC) relating to the proposed initial public ...

Vinfast EV cars are seen during a car shipment to the United States in Haiphong city, Vietnam, on Nov 25, 2022. (Photo: Bloomberg) HANOI: VinFast, an electric carmaker backed by Vietnam’s richest man trying to take on Elon Musk’s Tesla Inc, has filed for an initial public offering in ...

Vietnam-based electric vehicle maker VinFast said on Tuesday it has filed for an initial public offering in the United States and plans to list its ordinary shares on the Nasdaq under ticker symbol “VFS.” For the IPO, the company said it will convert to a Singapore public limited company ...