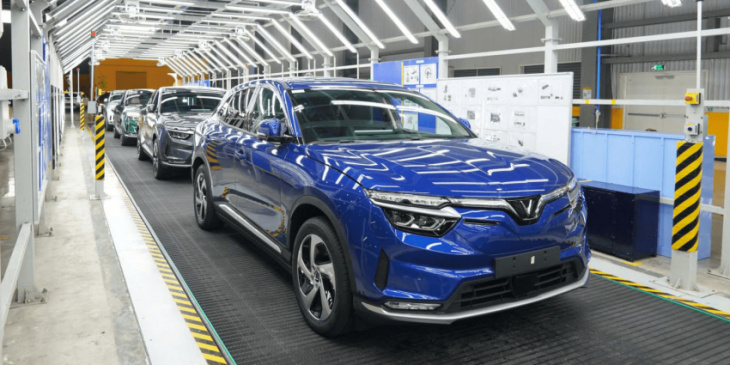 Vietnamese electric car manufacturer VinFast has started exporting its electric cars. The first batch of 999 VF 8s was shipped to the USA, where they are to be delivered this year. The first VF 9s will then follow in early 2023 – in Vietnam, as well as internationally.

After this first batch of cars for the US market, VinFast will export more VF 8s to Canada and Europe for delivery to customers there from early 2023. This has now been announced by the US offshoot of the Vietnamese carmaker. A small ceremony was held especially for the shipment, as it is a “remarkable milestone in the history of the Vietnamese automotive industry” when electric cars from its own production are offered and delivered on the world market.

The vehicles were brought on board the transporter ship ‘Silver Queen’ at the port of Hai Phang. The journey across the Pacific is expected to take about 20 days, so the Silver Queen would arrive in California on or around 15 December. Therefore, the first US customers (presumably on the West Coast) should be able to expect delivery before the end of this year.

In its home market of Vietnam, VinFast had handed over the first vehicles to customers in September. In Europe, VinFast is currently offering the VF8 and VF9 on a reservation basis, as reported, and deliveries here are scheduled to begin with the VF8 in early 2023, as mentioned above. By the end of 2022, VinFast plans to open over 50 stores in France, Germany and the Netherlands.

In the US, the car subscription service Autonomy had recently increased its order with VinFast to more than 2,500 electric cars. It is not known whether the first 999 examples already include vehicles for Autonomy or exclusively for private customers.

“The export of the first 999 VF 8s is a significant event for VinFast and Vingroup and a proud historical milestone for the Vietnamese automotive industry,” said Nguyen Viet Quang, deputy chairman and CEO of Vingroup. “It affirms that Vietnam has successfully produced high-quality standards electric vehicles that are ready to compete in the international market.”

Following the VF8, deliveries of the VF9 are expected to start soon. The first units of VinFast’s larger electric SUV are expected to be “handed over to customers in Vietnam and international markets in the first quarter of 2023”.

From noodle bars to cars: the $10bn automotive story of Vinfast

VinFast announces its headquarters in Germany, France and the Netherlands

VinFast recalls a third of its sold EVs to replace sensors

Infineon and VinFast extend partnership in the field of electromobility

Both are making their North American debut at the 2022 LA Auto Show, with the VF 8 and VF 9 electric midsize SUVs also on display.

VinFast VF6, VF7 debut in L.A., and a sports car could be added to lure U.S. buyers

VinFast SUVs California focused New warranty and service options VinFast showcased four battery-electric SUVs at the L.A. Auto Show this week, vehicles that it has long shown and discussed. But now it’s even hinting at a sports car, as the Vietnam-based automaker pushes ahead with its plan to break ...


View more: VinFast VF6, VF7 debut in L.A., and a sports car could be added to lure U.S. buyers

The compact SUVs are on display with the larger VF 8 and VF 9.

This is VinFast’s largest corporate order to date, and one of Autonomy’s largest electric vehicle orders, affirming the acceptance by the international market of the Vietnamese automaker. In August 2022, Autonomy ordered 23,000 electric vehicles across 17 different global automakers, including VinFast, to operate its subscription services. At that ...

The US electric car subscription service Autonomy has significantly increased its order from the Vietnamese manufacturer VinFast. With the new order, VinFast is now commissioned to deliver more electric cars to Autonomy than Volkswagen. Autonomy initially ordered 22,790 electric cars from 17 carmakers in August, including 400 from VinFast. ...

Vinfast partners with Shell Recharge on home charging in EU

From noodle bars to cars: the US$10bn automotive story of Vinfast

CATL to collaborate with VinFast on EV chassis development

VinFast Exports First Electric Cars From Vietnam To The US

VinFast exports first batch of EVs to US