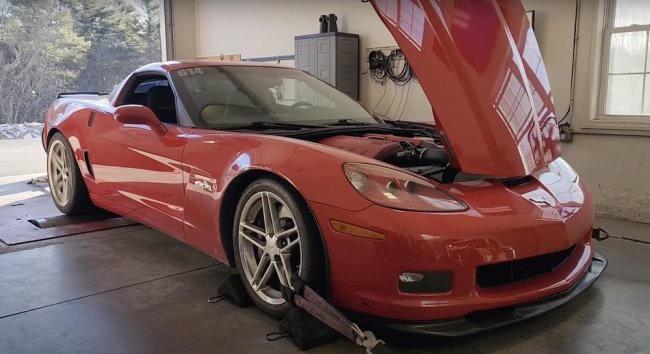 This C6 Corvette Z06 was in great shape with few miles, and after getting a new engine, it’s ready to rock once again.

While the prices of used, new, and collector vehicles have skyrocketed over the past couple of years, it’s still possible to find decent project cars on a budget, at least. Oftentimes, these gems in the rough have been mistreated in some way, shape, or form, or perhaps they’ve just become more of a project than their owners expected them to be. That’s certainly the case with this C6 Corvette Z06, which YouTuber Chris Sullivan picked up a few months ago after its previous owner blew the original engine up during a track session.

This particular C6 Corvette Z06 is a 2008 model with 36k miles that Sullivan purchased for a mere $15,000 – a price that seems too good to be true, but there’s obviously a reason for that – it has a big hole in the block after things went horribly wrong on the track. The seller didn’t want to mess with swapping out the powerplant for something new, instead opting to sell it as a project for someone with the time, money, and patience to bring it back to life.

That person is Sullivan, of course, who brings his latest project home and yanks the old motor out, inspecting the carnage in the process. While that old lump is unsalvageable, Sullivan scores a replacement LS7 on eBay for $9,200 that has a fresh bottom end and around 38k miles on it. As far as engine swaps go, this is a pretty easy one, and the C6 Corvette Z06 owner wastes no time getting the new powerplant installed.

Unlike some YouTube projects that drag on forever – or never get completed, this Z06 is up and running in literally no time, sounding great thanks to its long tube headers and freer-flowing exhaust system, as well as a bigger cam and upgraded heads. Within just a couple of weeks, the Corvette is running and driving again, and most recently, the car hit the dyno to see just what kind of power the replacement LS7 is pumping out.

Right off the trailer, the C6 Corvette Z06 puts down a solid 540 horsepower, but of course, there’s more to be unlocked. Once the tuner finishes tweaking things, the car cranks out a very solid 591 horsepower at the wheels, which is truly impressive for a motor that is still running its stock intake and throttle body, with just a small handful of mods. And given the small amount of money that Sullivan has invested in it, it’s easy to see why these cars make such great projects – if you can find one in good shape that needs something like a new motor, that is.

Based on the road-going Z06, it uses an engine derived from the 5.5-liter flat-plane crank V-8.

Photo: Chevrolet Chevrolet has announced the global launch and unveiling of its new Corvette Z06 GT3.R at the 24 Hours of Daytona, its first racecar which meets the GT3 specifications for global GT racing. It has been developed in a joint partnership between GM’s Competition Motorsports Engineering department and ...

The Chevrolet Corvette is turning 70 years old, and on this historic anniversary is the debut of the 2024 E-Ray. The E-Ray is the first electrified Corvette, featuring a hybrid powertrain and, also a Corvette-first, an all-wheel drive setup. The debut of the E-Ray coincides– to the day– with ...

On “My Car Story” we’re at the Wisconsin State Fair Park in West Allis WI on 2-22-18 at the World of Wheels car show. We’re looking at a 1958 Chevrolet Corvette Custom in Ruby Paint. The car has the 383 CI “Stroker” engine. The car’s Owner is Jim Stewart. Jim’s ...

This 1969 Chevrolet Corvette Stingray ZL-1 Convertible is about as rare as it gets when it comes to American muscle cars. This 560 horsepower monster was powered by a derivative of the CanAm racing engine, albeit in a street legal, factory-built production car. Only two cars ever left the ...

It’s been known that Chevrolet was planning on electrifying the Corvette for some time now, and the day for an official reveal is now on the books: January 17th. A short teaser video was posted by the official Chevrolet Corvette Facebook page, giving us short glimpses of the upcoming ...

Chevrolet’s ’24 Corvette E-Ray is a gasoline-electric hybrid and marks the first time the iconic sports car gets an electrified powertrain.

And they kept part of the sinkhole, too.


View more: The National Corvette Museum Is the Home of America's Sports Car

Electrifying Chevy Corvette E-Ray is how you modernise an icon

The E-Ray Is for a Different Type of Corvette Person

The Corvette E-Ray's Hybrid Setup Is All About Performance