Video: Denny Hamlin Blames NASCAR for 'Big One' at Daytona That Could Decide Playoff Field 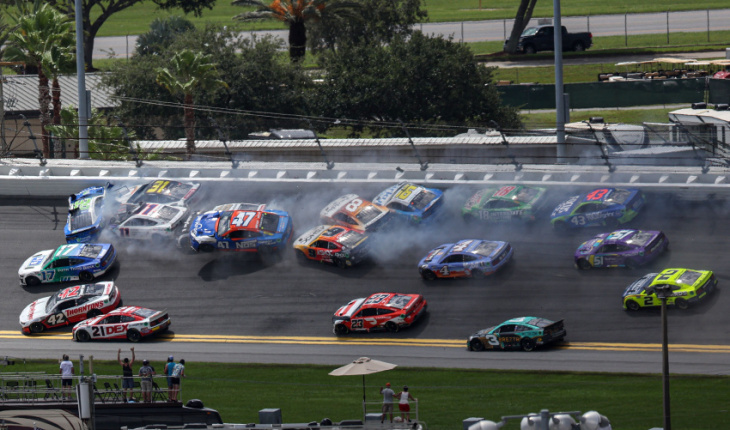 Rain and NASCAR both took their share of the blame for a huge crash on Lap 139 of the 160-lap Coke Zero 400 NASCAR Cup race at Daytona International Speedway on Sunday.

The race immediately went into a rain delay, and was still delayed as of 3 p.m. ET on Sunday. The race was rained out on Saturday night and began at 10 a.m. ET Sunday.

Ride with @austindillon3 as he avoids the accident in the middle of the corner at @DAYTONA. pic.twitter.com/lrFNkwjbv7

Hamlin placed the blame squarely on NASCAR for being slow to display the caution when the rain became obvious.

“I ran into the rain in the middle of Turn 1 and just lost it,” he said. “We had rain down the frontstretch, so it was raining about 10 seconds before we got into Turn 1. I’m sure the fans felt it, then they watched us all pile in there.

“I’m just shook mostly. The hit was massive; my first one in this Next Gen car and it was legit. I made the right moves at the right time and got in the lead at the right time. But it was also a bad time because we were the first ones to get to the rain.”

When asked what NASCAR could do to prevent similar accidents, the three-time Daytona 500 winner had a simple answer: “All we can do is better officiating.

Keyword: Video: Denny Hamlin Blames NASCAR for 'Big One' at Daytona That Could Decide Playoff Field