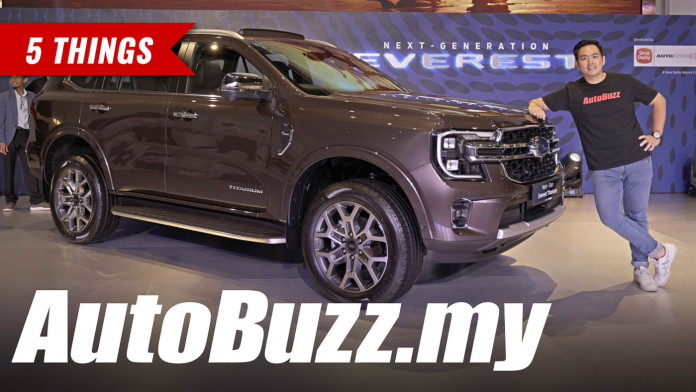 Two months after the launch of the all-new Ranger, we’re now welcoming its SUV brother, the Ford Everest, here in Malaysia. The seven-seater SUV will be available in three variants: Sport 2WD, Trend 4WD, and Titanium 4WD, starting at a price of RM263,888.

In terms of appearance, the all-new Ford Everest shares many of the same design touches as its pick-up truck sibling, including the new signature C-clamp mount, alongside the prominent full-width horizontal bar across the front grille.

As usual, the range-topping Titanium variant gets all the goodies on the outside, including Matrix LED projection headlights, as well as underbody bash plates. Both the entry-level Sport and range-topping Titanium variants of the Ford Everest sport 20-inch wheels, while the Trend variant gets a set of smaller 18-inch rollers, as it’s positioned as the off-road-focused model here in Malaysia.

The cabin of the Ford Everest is also pretty much identical to that of the Ranger. The two lower-end variants get a 10.1-inch vertically-oriented central infotainment display, paired to an eight-inch digital instrument cluster, while the range-topping Titanium gets 12.4- and 12-inch screens respectively.

As for powertrains, the entry-level Sport variant gets a 2.0-litre single-turbo inline-four diesel mill with 170 hp and 405 Nm of torque, paired to a six-speed automatic gearbox to send drive to the rear wheels. The two other variants meanwhile are powered by a bi-turbo version of the same engine, which raises the outputs to 210 hp and 500 Nm. The bi-turbo mills are also paired to a 10-speed automatic gearbox, as well as an all-wheel drive system with Electronic Shift-On-The-Fly system.

Included in the price is a three-year/100,000 km manufacturer’s warranty, plus a two-year/60,000 km extended warranty offered locally by SDAC.