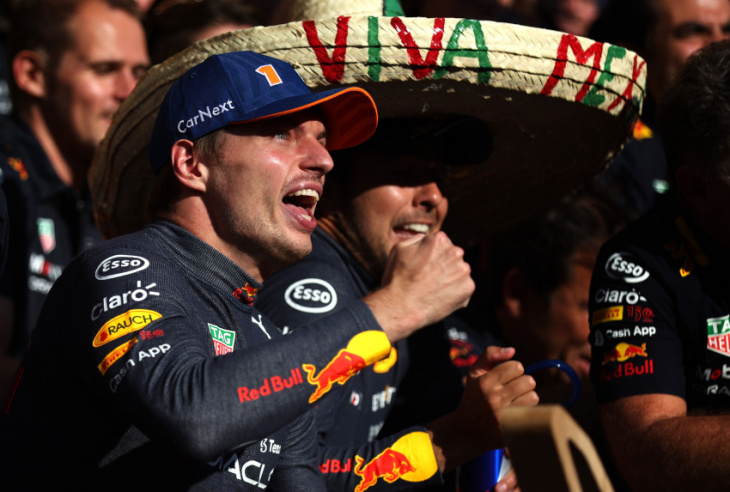 Max Verstappen made up 13 positions in as many laps to romp to a ninth victory of the season at Formula 1’s Belgian Grand Prix. It was his 28th career win in F1 and it might just have been his most dominant to date.

Autoweek runs down the key talking points from Spa-Francorchamps.

The entire weekend was a totally emphatic performance by Verstappen and Red Bull Racing.

Verstappen was buoyant over the feel of his RB18 from the very first lap of practice—not something that he frequently finds—and cruised to pole position by over six-tenths of a second, despite not having to bother 100% given his engine penalty.

From 14th on the grid, Verstappen moved up to eighth at the start, and swiftly picked off rivals, including two on one lap, to hit the front by lap 12. Verstappen seized control on merit, given respective pit stop cycles, on lap 18, which was still before the race reached mid-distance. He simply romped off into the distance. At times Verstappen was over a second faster than anyone else on track and ultimately cruised home 17 seconds clear of Red Bull teammate Sergio Perez. 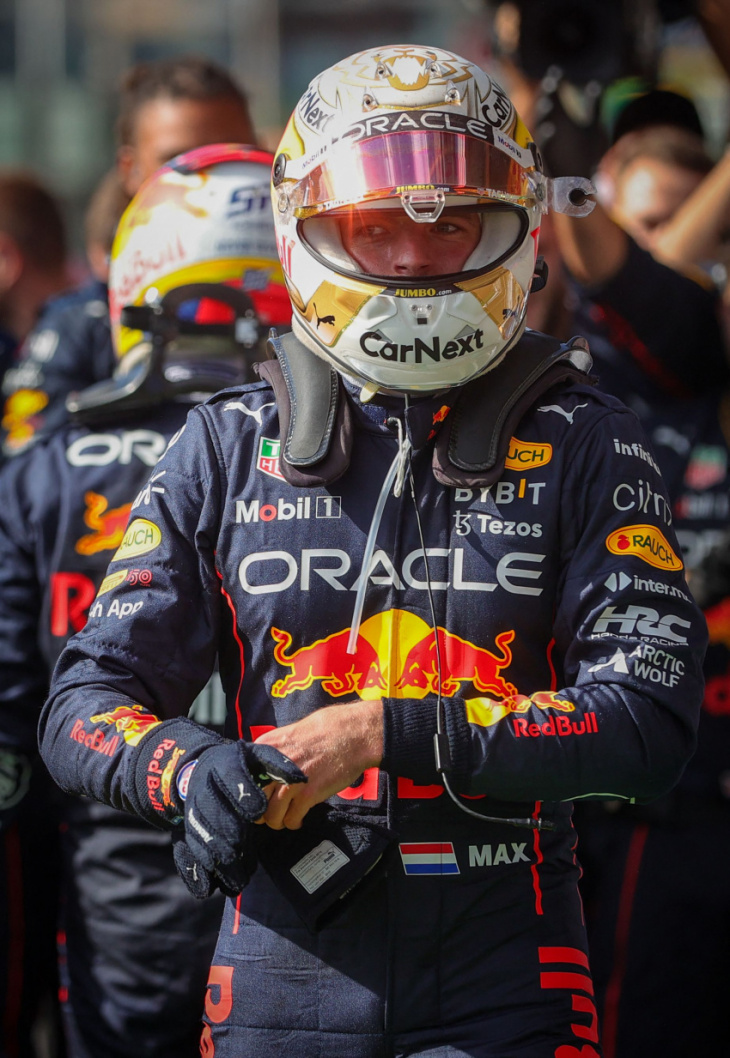 Max Verstappen extended his dominant lead in the standings with an easy win on Sunday.

On whether it was the most dominant display of his Formula 1 career, Verstappen replied: “I think if you look at the whole weekend, yes, the car has been incredible from FP1—I don’t think we expected it to be like this. We knew we had our difficulties, starting P14, but we stayed out of trouble in lap one, which wasn’t easy as it was very hectic.

“I think our car is very efficient and I think this track suits it perfectly. Some tracks coming up might be a bit more difficult, but this track seemed to be perfect for the car.”

Perez said no one had a chance against Verstappen on this day.

“Max was flying, he was on another planet today,” said Perez.

“I think this circuit has played to our strengths, we have a very efficient car, we have found a very good set-up, and Max has just been in phenomenal form,” said Horner. “Max hit the front far quicker than we could have ever expected. It’s probably one of the most dominant performances we’ve had as a team since 2010 or 2013, I think it’s right up there with that period. I don’t think we’ve ever won a race starting 14th on the grid, so a phenomenal performance.

“Max was simply in a league of his own. He smashed it out of the park. Max has taken another step since winning the title, it’s in many ways released him, he’s driving at an incredible level.” 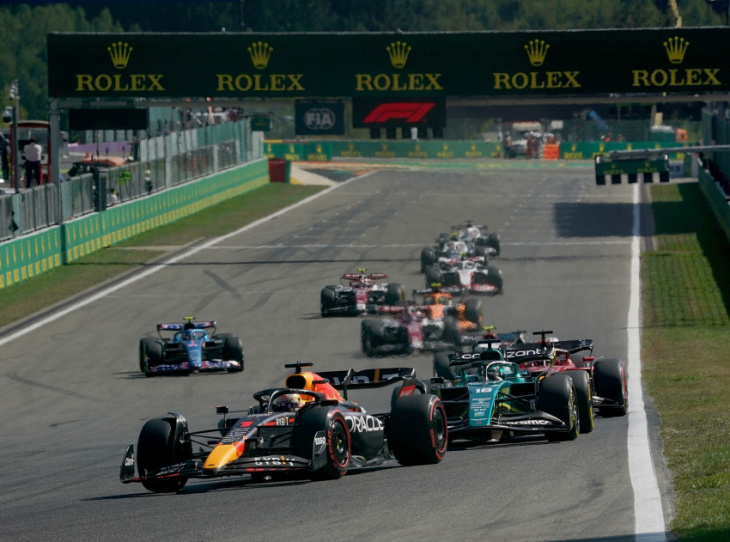 Max Verstappen wasted no time making his way through the field at Spa.

Verstappen’s ninth win of the year means he is now 93 points clear of Perez, with Ferrari’s Charles Leclerc 98 back in third place in the Drivers’ Standings.

It is now possible for Verstappen to wrap up the title in Singapore, with 138 the magic number. That would mean he would clinch the title with five races remaining in the season, which is a far from from last year when he one the title on the last lap of the last race of the season.

More realistic for a title clincher is the following race in Japan, where an advantage of 112 would be sufficient for Verstappen to be crowned a double champion on Honda’s home soil.

Horner, though, continued to play it cool.

“As far as the championship tables look, they look healthy, but things can change quickly,” he said. “Our prerogative is on each race one at a time and the championship will take care of itself.”

How Ferrari Blew It This Time

In the grand scheme of the title race, Ferrari’s latest fumble did not enact huge damage. The damage has already been done to the team’s title chances this year.

But, it was yet another race in which there was a mistake or two.

Charles Leclerc recovered from 15th to fifth, having been out of sequence after a visor tear-off lodged in his brakes and caused an early stop. Then, he was brought in with two laps to go for fresh tires in an effort to make a run at the fastest-lap bonus point. Only it didn’t work out that way. 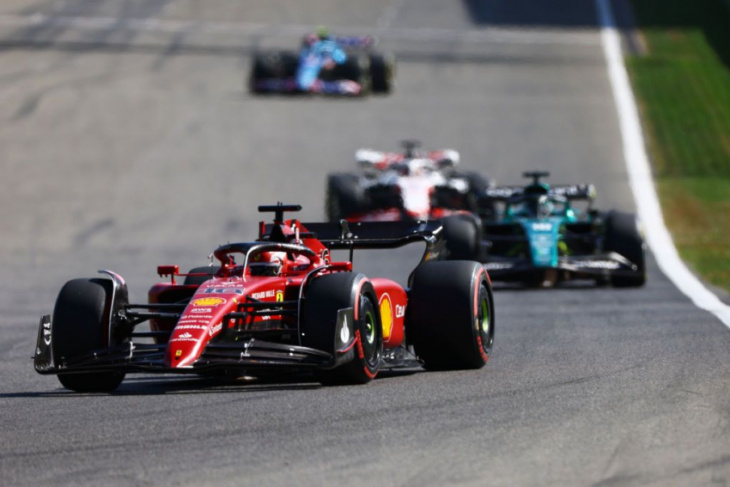 Ferrari and Charles Leclerc had more mistakes on Sunday at Spa to add to a series of misfortunes this season.

Leclerc filtered back into sixth place behind Fernando Alonso, and the time spent re-passing the Alpine driver robbed Leclerc of the clean air he needed to push for the fastest lap. Yet that wasn’t the end of the story. Leclerc was judged to have exceeded the pit lane speed limit and was handed a five-second time penalty, dropping him once more behind Alonso.

But of more importance to Ferrari was its overall performance. From pole position, and track advantage in the first stint, Carlos Sainz was powerless to resist the Red Bull drivers. Sainz held onto third but was nine seconds down on Perez, and 26 behind Verstappen, with Mercedes’ George Russell snapping at his heels in the closing laps.

“We were just not strong enough,” said Sainz. “They were on another planet this weekend: stronger in the race, stronger in corners, stronger on tires. We would lie if we wouldn’t say we are surprised [at the deficit] as the gap was certainly the biggest we have seen all season across the two teams. It’s certainly something we didn’t expect, so we need to go back and analyse why at this type of track we are so weak.”

Ferrari team principal Mattia Binotto concurred that “the Red Bull is a faster car compared to what we have got, in terms of efficiency, but more than that we had today a lot of tire degradation we need to look into.

“I think Spa is amplifying the gaps because it is a long track, and when you have an advantage it amplifies it in such a circuit. We hope to be back in the next races, and be closer. I think tire degradation was the element affecting the performance of today on which we need to understand as it will be important as well for the next races.”

Another Weekend to Forget for Haas

Haas had a weekend to forget. The team, seventh in the standings, remained toward the back of the field and simply lacked overall performance. Kevin Magnussen was 16th, Mick Schumacher 17th, as the pair finished in front of only Williams’ Nicholas Latifi. 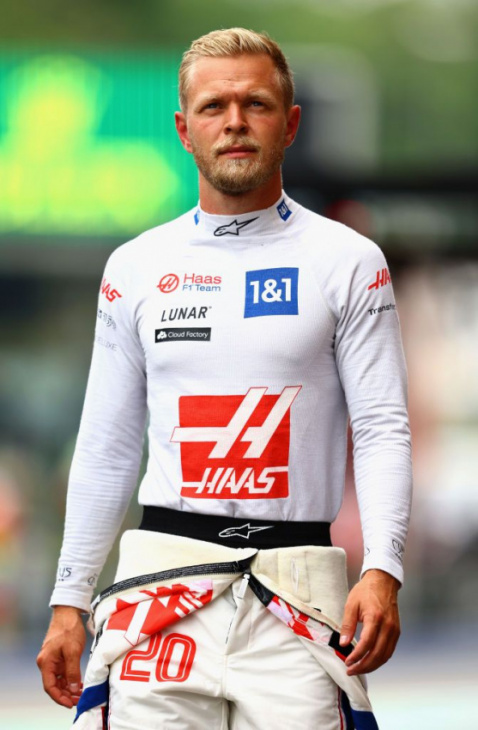 Kevin Magnussen topped the Haas drivers with a 16th-place finish.

“I think we had an idea that this wasn’t going to be such a strong weekend,” explained Magnussen. “This type of track isn’t really our track so we tried what we could, but we didn’t really have the pace today.”

Schumacher agreed, admitting “it was frustrating not having any top speed compared to the cars around us, but with Zandvoort coming up we should be in a better position where we should be able to fight for points.”

“I’m quite disappointed with the result today but it was almost expected,” he said. “On a high-speed track where we need low drag, our car is just not good enough this year.”

The one positive for Haas was that it achieved a two-car finish with the upgraded VF-22, which was introduced only in Hungary, and which Schumacher ran for the first time in Belgium.

“We should have a better read on the upgrade where it’s more comparable to Budapest,” said Schumacher. “I expect us to go a bit forward and hopefully it will give us some points.”