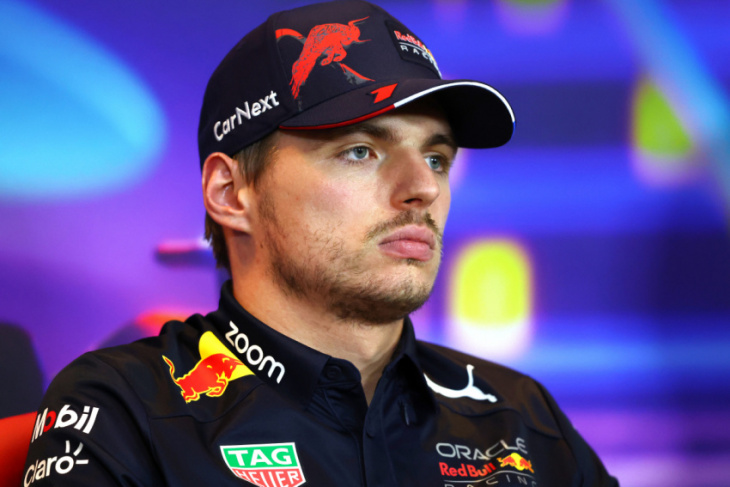 Max Verstappen has slammed the media following the backlash he and his family has received following the Formula 1 Sao Paulo Grand Prix.

Verstappen finished sixth in the race last weekend, disobeying team orders on the final lap by refusing to let Sergio Perez back through.

It’s a move that met with a critical response from both the media and fans, with the world champion-elect lambasting both in Abu Dhabi.

The Red Bull driver was asked about the incident when he fronted the press in Yas Marina on Thursday afternoon.

There, he explained that the situation has since been discussed internally and that it would remain that way.

“I have never been a bad team-mate to anyone, I’ve always been very helpful, and the team knows that,” he explained.

“I think what we learned from that is that we have to be a little bit more open, and we have to communicate better to each other.

“After the race, of course, I looked very bad in the media.

“But also, they don’t have a clear picture. But to immediately put me down like that, it’s pretty ridiculous to be honest because they don’t know how I work within the team.

“So all the things I’ve read is pretty disgusting.

“Even more than that, they started attacking my family; they were threatening my sister, my mum, my girlfriend, my dad.

“For me, that goes way too far.

“You don’t even have the facts of what was actually going on, and that definitely has to stop.

“If you have a problem with me, that’s fine, but don’t go after my family, because that’s just unacceptable.

“Honestly, I have a great relationship with Checo [Perez], but I just don’t understand when people don’t have the full picture maybe start attacking me like that.

“I hope one day they actually understand what was going on, because it’s just unacceptable behaviour of so many people.”

While Verstappen is entitled to his opinion – and is absolutely correct in that online bullying and abuse is inexcusable – his outburst has done him no favours.

On the one hand he complained about the uninformed media coverage, while on the other refused to clarify to ensure the ‘correct’ story was told.

“You don’t know the real story, so you don’t need to write a story,” he argued.

“I’m just a bit fed up with all this bullshit just going around all the time.

“It’s pretty sickening, to be honest, being part of that.

“At the end of the day, I haven’t even done anything wrong, it’s just people misunderstood what was actually going on.”

Without clarification on why Verstappen refused to allow back though, the media is left to assume it relates to Perez’s crash during Qualifying in Monaco.

For his part in all this, Perez has denied his crash at Portier was deliberate, stating that he’d almost crashed at the opening corner on the same lap as he chased lap time.

The team itself has also issued a statement regarding the incident, acknowledging its part in the drama that unfolded a week ago.

“As a team we made some mistakes in Brazil,” the team posted on its website.

“We had not envisaged the situation that unfolded on the last lap and we had not agreed a strategy for such a scenario before the race.

“Regretfully, Max was only informed at the final corner of the request to give up position without all the necessary information being relayed.

“This put Max, who has always been an open and fair team player, in a compromising situation with little time to react which was not our intention.

“Following the race Max spoke openly and honestly, allowing for both drivers to resolve any outstanding issues or concerns.

“The team accept Max’s reasoning, the conversation was a personal matter which will remain private between the team and no further comment will be made.

“The events that followed from a social media point of view are completely unacceptable.

“The abusive online behaviour towards Max, Checo, the team and their respective families is shocking and saddening and unfortunately is something that we as a sport are having to address with depressing regularity.

“There is no place for it in racing or society as a whole and we need to do and be better.

“At the end of the day this is a sport, we are here to race.

“We value inclusion and want a safe space for everyone to work in and enjoy our sport. The abuse needs to stop.”