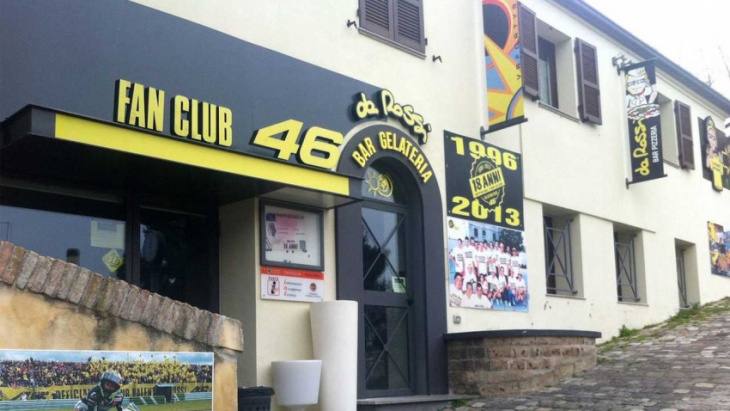 If you’re reading this in the States, odds are you’re thawing your turkey by now. With the Thanksgiving feast just hours away, many Americans are sliding into sweatpants and checking the football schedule. On the other hand, Thanksgiving also signals the beginning of the holiday shopping season, with Black Friday drawing shoppers to millions of retailers around the world.

Valentino Rossi hopes to capitalize on that buying frenzy by holding his VR46 flagship store grand opening on Thursday, November 24, 2022. The new shop will take over the space previously occupied by the Da Rossi café and the Rossi Fan Club headquarters.

In order to transform the 400 square-meter (4,305 square-foot) space into a suitable retailer, the Doctor called upon Pesaro, Italy-based artist and designer Marco Morosini. Given Morosini’s past works, it seems like we can expect the artist to put Rossi’s flamboyant and bright designs to good use. According to several sources, the space will also lean heavily on number 46’s iconic Vale Yellow and black color scheme.

Morosini will employ lighting effects throughout the two-story space, toeing the line between the VR46’s premium apparel and the Doctor’s affable personality. Of course, mementos, images, and gear from Rossi’s historic career will also round out the decorations. For the true gearheads, the store will also feature three professional-level car driving simulators.

Following the 43-year-old’s retirement from MotoGP in 2021, he has taken to four wheels in the GT World Challenge Europe series. While the simulators represent Rossi’s latest passion, his roots remain in motorcycle racing. Any doubters need look no further than the flagship store’s Dainese VR46 section and VR46 Rider’s Academy capsule.

That dedication to motorbikes doesn’t stop the Doctor from expanding his reach either. With the new VR Equipment collection, Rossi lends his design hand to motocross, mountain bike, and active sportswear. If traveling to Tavullia isn’t in the cards this holiday season, Vale fanatics can still snag the perfect Rossi gift at the VR46 and VR Equipment websites (below).