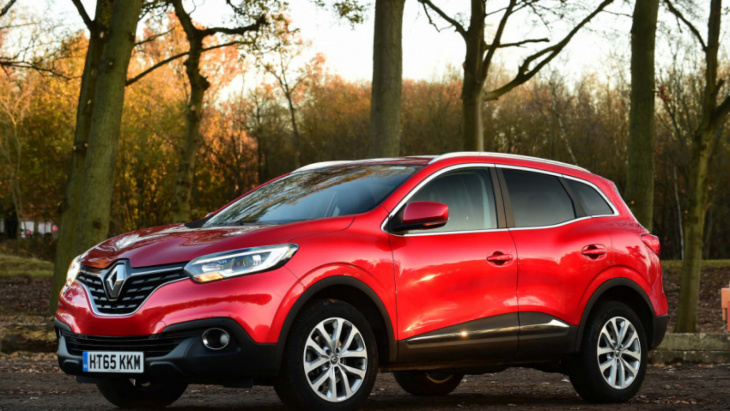 Renault was slow to launch its first mid-sized SUV, but the Kadjar was worth waiting for. It was our Crossover of the Year at launch and this was backed up by impressive Driver Power scores. When we ran a Kadjar dCi for 10 months and 22,000 miles we quickly warmed to its 52mpg economy, refinement, comfort and spacious cabin, but with the all-new Renault Austral on sale next year, the gloss has worn off its predecessor a bit. That’s only natural now that the Kadjar is seven years old, but running costs should still be low and comfort levels high. Just be sure to check that everything works before buying – especially all of the electronics.

Renault’s first foray into SUV production didn’t end well. Its Koleos of 2008 failed to interest buyers, but when its supermini-sized Captur was launched in 2013, it went on to become the French firm’s most popular model.

With this newfound momentum, Renault then introduced the Kadjar a couple of years later, a size up from the Captur and another car that hit the spot with its appealing design, roomy cabin and low running costs. It helped that the Kadjar was based on a car that had already proved to be a smash hit, the Nissan Qashqai, but we reckoned that the Renault was actually better than the Japanese car. Seven years after its launch, there’s still much to like about the Kadjar.

Then in February 2019 a facelifted Kadjar reached showrooms, with refreshed styling and new petrol engines, as well as upgraded diesel units. The line-up then consisted of the 138bhp TCe 140 and 158bhp TCe 160 1.3-litre petrol engines, along with 114bhp 1.5-litre Blue dCi 115 and 148bhp 1.7-litre Blue dCi 150 diesel motors. Again, the latter came with the option of front or four-wheel drive.

From February 2022 the Kadjar range was cut to just the TCe 140 engine and two trim levels: Equilibre and Techno.

Which one should I buy?

We wouldn’t steer you away from any of the engines; none offers blistering performance but all are frugal enough. However, if you want an automatic, the EDC dual-clutch ’box is much nicer to use than the X-Tronic CVT. 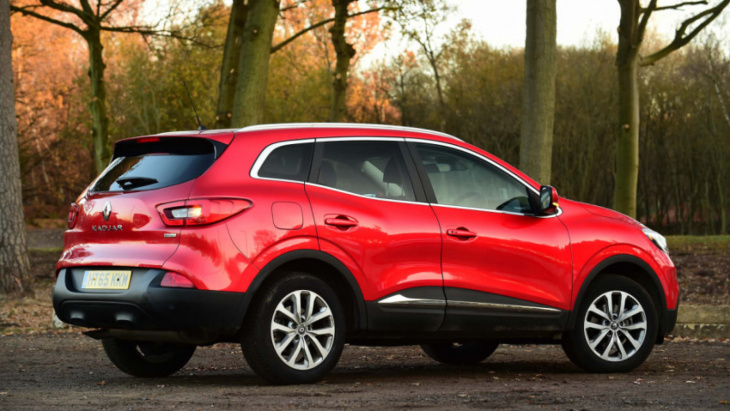 Alternatives to the Renault Kadjar

Mid-sized crossovers are very popular, so there are lots to choose from. The Nissan Qashqai shares a lot with the Kadjar and is plentiful, while the Hyundai Tucson and its cousin, the Kia Sportage, are well equipped, good value and come with long warranties.

Also related to each other are the SEAT Ateca, Skoda Karoq and Volkswagen Tiguan; they’re solidly constructed, easy to live with and come with some impressive engines, while the Mazda CX-5 is great to drive, stylish and has an impressive cabin.

The Ford Kuga is dynamically capable and well equipped, while the Peugeot 3008 is another great-looking car with an impressive interior. The Toyota RAV4 is also worth considering for its reliability, bold design and efficient hybrid powertrain.

The alarm beeps if the battery is losing charge; the car needs driving or the battery replaced. Faulty tilt sensors also cause this.

All Kadjars come with a tyre repair kit. You can buy a space-saver spare wheel for £150, but it won’t fit if the optional Bose stereo is specified.

The button cell battery in the key card doesn’t tend to last more than two years. Don’t forget to change the one in the spare key card at the same time.

Some Kadjar owners have complained about electronic glitches. Many of these relate to the infotainment system, which can suffer from Bluetooth and sat-nav issues. Check these are working on any used example you look at.

The fit and finish is generally very good, but until the 2019 facelift some of the switchgear placement was a bit haphazard; later cars are much better in this respect. 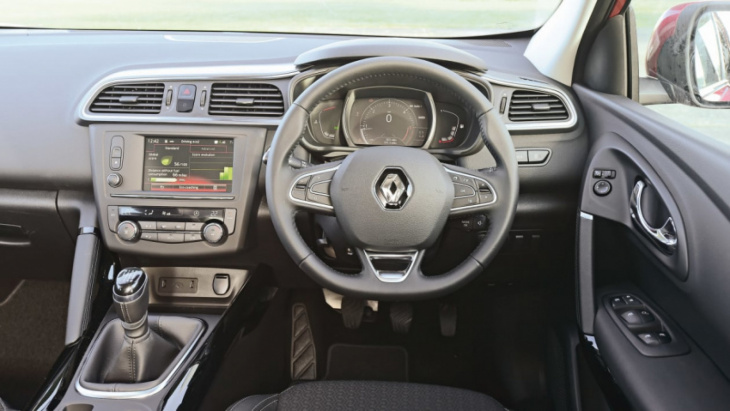 What has always been good is the amount of cabin space, with lots of room for three adults unless they’re taller than average. Boot space is pretty good too, at 472 litres with the seats up, which puts the Kadjar pretty much in the middle of the class.

The 2019 facelift for the Kadjar brought a better integrated infotainment system, but removed the main physical volume controls. The buttons on the steering wheel stayed in place, however.

All Kadjars need to be serviced every 12 months or 18,000 miles. There are two levels of service: A and B, typically priced at £120 (it can vary between dealers) and £195. While the former consists of just a fresh pollen filter and various checks, the latter adds an oil and filter change. High-mileage drivers are encouraged to combine the two services for around £250.

All Kadjars came with a four-year/100,000-mile guarantee, with no mileage limit for the first two years.

Renault has recalled the Kadjar six times so far, the first in January 2016 because of a possibility of brake servo failure, but not failure of the brakes altogether.

Two campaigns were issued in April 2016, one because of the side airbags failing to deploy properly in the event of a collision, and the other because of a chance of seatbelt malfunction during a collision.

Release number four was issued in September 2017, once again because of side airbag glitches. Faulty catalytic converters were the reason behind the fifth recall in July 2020. Just two cars were affected though, having been built in October 2019.

The most recent Kadjar recall was issued in August 2020, affecting more than 45,000 cars built up to July 2018, to fix faulty child door locks.

When the Kadjar made its Driver Power debut in the 2016 new-car poll, it went straight in at number three (out of 100). Its last appearance was in the 2020 survey, where it came 65th out of 75 models. It finished 55th in 2019, when it also achieved 59th in our used-car poll (out of 100 cars). Low running costs and cabin space/practicality are highlights, but owners are less impressed by the driving experience and overall quality.