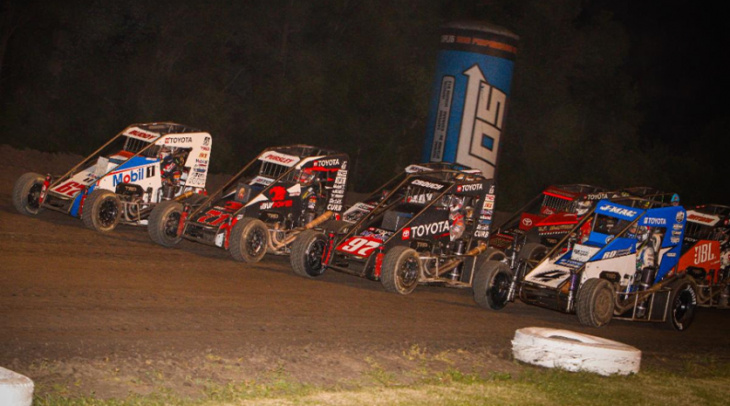 GAS CITY, Ind. — For the entirety of this summer, Cannon McIntosh has been among the most consistently strong drivers on the USAC NOS Energy Drink Midget National Championship trail.

Three wins and eight top-fives in his last 11 series starts since mid-June have driven that point home entering this Thursday night’s James Dean Classic at Gas City I-69 Speedway on September 22.

Oh, by the way, the Bixby, Okla. native comes in as the only driver to win a midget race during the James Dean Classic, doing so in September of 2020, as he blasted from fourth to second on the opening lap by splitting between the two front row occupants, then powered past to occupy the race lead on lap three.

McIntosh is one of three past Gas City USAC National Midget winners in the field for Thursday night along with Justin Grant and Buddy Kofoid.

Kofoid is the most recent series winner at Gas City, capturing the Indiana Midget Week round in June of 2021 after leading all 30 laps. In the 2020 James Dean Classic, starting deep from the 18th position, the reigning series champ and current series point leader carved his way up to a 7th place finish. With one more victory this weekend, the nine-time series winner in 2022, would become the first to hit double-digits USAC National Midget wins in a single season since Rich Vogler in 1988.

Justin Grant is both a winner in USAC National Midget competition and is also a past James Dean Classic feature winner. The 2020 USAC Silver Crown champion netted an Indiana Midget Week win at Gas City in 2019 and captured the Sprint Car portion of the “James Dean” in 2020. He finished 6th during the midget feature at the JDC in 2020.

Keith Kunz/Curb-Agajanian Motorsports teammates Daison Pursley and Kaylee Bryson each own one James Dean Classic start, both in 2020. Pursley led the opening two laps in that one before going on to finish 8th while Bryson tallied a 19th. Both were top-ten finishers during IMW of 2021 at Gas City with Pursley 4th and Bryson 9th.

Hayden Reinbold, Bryant Wiedeman and Brenham Crouch were among those who made their first USAC National Midget appearance at the James Dean Classic in 2020. Reinbold took 22nd during the evening while Wiedeman and Crouch missed the transfer spot, but returned to the lineup in June of 2021 at Gas City with Wiedeman finishing 23rd and Crouch 16th.

Tanner Carrick returns to the USAC National Midget lineup for the first time this season on Thursday. The 2019 USAC National Most Improved driver finished 10th at the James Dean Classic in 2020 while Ethan Mitchell grabbed 23rd.

First-time James Dean Classic entries come from Jacob Denney who owns four Gas City wins with the USAC Midwest Thunder SpeeD2 Midgets between 2020 and 2021. He captured a heat race win in June’s Indiana Midget Week event at GC before the rain hit as did leading series Rookie of the Year candidate Mitchel Moles.

Denney will be driving one of two entries for car owner Tom Malloy this weekend alongside 2018 USAC Eastern Midget and 2021 USAC East Coast Sprint Car titlist Alex Bright. Bright has made five previous USAC National Midget feature starts at Gas City with a best of 8th during Indiana Midget Week in 2012.

They’ll be joined by a trio of women, each of whom are seeking their first USAC National Midget starts at Gas City: Taylor Reimer, Maria Cofer and Mariah Ede.

Thursday’s James Dean Classic at Gas City is a doubleheader with the USAC AMSOIL Sprint Car National Championship on September 22. The event honors the memory of the late actor, cultural icon and budding auto racing driver who was born just 11 miles away from Gas City I-69 Speedway in Fairmount, Ind.