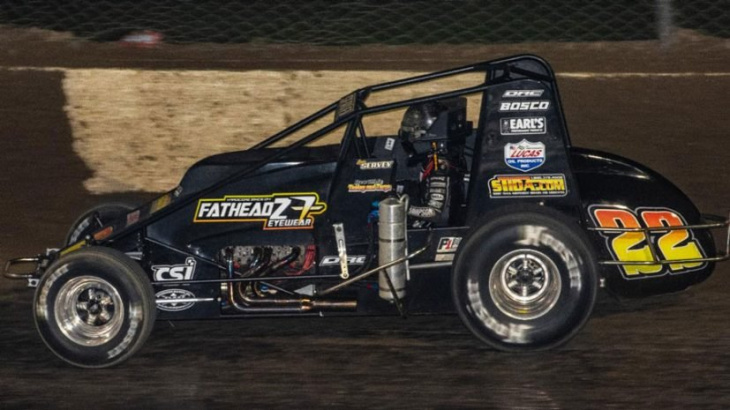 When it came to the USAC Silver Crown nightcap, Seavey pulled no punches right from word ‘go’ as he charged from sixth to second on lap one, and from second to first on lap two, leading the final 49 circuits to corral his first victory at the half-mile dirt oval.

Coming into this weekend’s 40th running of the event presented by NKTELCO at Eldora, Seavey enters as the most recent USAC Silver Crown winner. His last victory came on September 5 at the Du Quoin (Ill.) State Fairgrounds, which constituted a war of attrition and a survival of the fittest affair that tested both and machine to the ultimate limits.

Saturday night’s 50-lapper at Eldora is as close to a sprint you’ll get with the champ cars. As for the only other 50-lapper the series ran on a half-mile dirt track this season, Seavey also won that one back in June at Port Royal (Pa.) Speedway.

The Sutter, Calif. native is one of 30 entries in a jam-packed Eldora lineup that includes four past race winners.

The Silver Crown portion of the 4-Crown weekend kicks off with practice, qualifying and a 10-lap qualifying race on Friday night followed by a brief practice session and the $10,000-to-win, 50-lap race on Saturday night.

Windom Has Been There, Done That

Chris Windom’s record at the 4-Crown is impeccable, one that includes victories in sprint cars and midgets to go along with two wins in the Silver Crown division in 2013 and 2016. Windom will pilot a car for Bill Rose Racing this weekend.

Brian Tyler has won at Eldora on multiple occasions in his career, first in a USAC Sprint Car in 1997 and again in 2002 in the 4-Crown Silver Crown 50-lapper.

C.J. Leary made a banzai run to the checkered flag in winning the 2018 Silver Crown go at Eldora, in addition to eighth place results there in 2015 and 2019.

Swanson Is Searching For The Crown

Taking a close runner-up finish to Seavey in the 2021 Silver Crown race was Matt Westfall, who won his only career USAC National Sprint Car feature at Eldora in 2006. In a Silver Crown car at Eldora, he’s been phenomenal in his scare appearances over the past two decades.

Past USAC Silver Crown champ Justin Grant has been victorious three times in USAC National Sprint Car competition at Eldora and has finished solidly at the track throughout his Silver Crown career.

Dallas Hewitt finished seventh in June and eighth in September’s 4-Crown during the 2021 Silver Crown season at Eldora. Dallas is the nephew of Jack Hewitt, the winningest Silver Crown driver of all-time at Eldora with eight victories.

Shane Cottle won the pole in 2018 and has finished inside the top-five on seven occasions in Silver Crown competition during the 4-Crown at Eldora, including in each of his past four starts.

A surplus of 4-Crown Silver Crown experience is apparent throughout the substantial field, all of whom are striving for a first victory at the half-mile dirt oval.

Eric Gordon’s USAC Silver Crown experience dates back to 1990 where he finished seventh in his rookie season, which resulted in a second place finish in the final standings.

Jake Swanson’s first crack at the 4-Crown resulted in a solid seventh place finish in 2021 for the Anaheim, Calif. native. Kyle Robbins took home a ninth place result in both the 2018 and 2021 race. Matt Goodnight charged from 25th to ninth at Eldora in 2019.

Carmen Perigo returns to the 4-Crown for a second Silver Crown attempt after finishing 13th in 2021, as will Casey Buckman who finished 21st in 2021 and is coming into the race after finishing a career best fifth at Du Quoin. Erik Karlsen, a CRSA 305 sprint car champion at New York’s Canandaigua Speedway, made his first ever USAC Silver Crown start at the 4-Crown in 2021, finishing 23rd.

BACK TO THE FUTURE

Russ Gamester, Chase Stockon and Jimmy Light make their Silver Crown 4-Crown return after somewhat lengthy hiatuses. Gamester made his first 4-Crown Silver Crown start during his USAC National Midget championship season of 1989. Gamester’s most recent Eldora start came in 2014 with his best result coming in 1997 with a fifth.

Brian Ruhlman has yet to step foot in a Silver Crown car at Eldora. However, he sure doesn’t lack for experience, especially at the 4-Crown Nationals. Ruhlman grabbed UMP Modified victories during the event on three occasions in 2002, ’04 and ’05.

Longtime veteran Dave Peperak won his only career USAC National Sprint Car feature at Eldora on the final lap of the 1981 season opener — a race which aired on ABC’s Wide World of Sports.

Fellow first-time 4-Crown National Silver Crown first timers include Buddy Kofoid, who finished fourth twice in a midget at the 4-Crown in 2021. He’ll drive Hans Lein’s No. 97, which won the 2017 race with driver Tyler Courtney.

They’re joined by top series Rookie of the Year candidate Gregg Cory, Jake Simmons, Tom Paterson and Nathan Moore who’ll be among those pulling double-duty at the 4-Crown this weekend with the USAC National Sprint Cars.