The Ultra Low Emmission Zone (Ulez) in London is set to be massively expanded.

The zone, operated by Transport for London, aims to clean up London’s air by discouraging use of high-polluting vehicles. Anyone driving a motor vehicle in the Ulez that doesn’t meet its emissions standards and isn’t exempt must pay a charge.

The scheme was introduced in 2019, with the aim of cutting pollution in central London by 15 per cent. It operates 24 hours a day, midnight to midnight, every day of the year, except Christmas Day.

Here’s everythig you need to know.

What is happening to the Ulez zone?

However, it is going to be expanded enormously. From 29 August 2023 it will include everywhere within the Greater London Authority boundary, and some areas beyond. You can see details and an interactive map here.

People with non-compliant cars who live in the Ulez are not exempt from daily charges.

“The Ulez so far has been transformational, reducing harmful pollution levels by almost a half in central London,” said London Mayor Sadiq Khan. 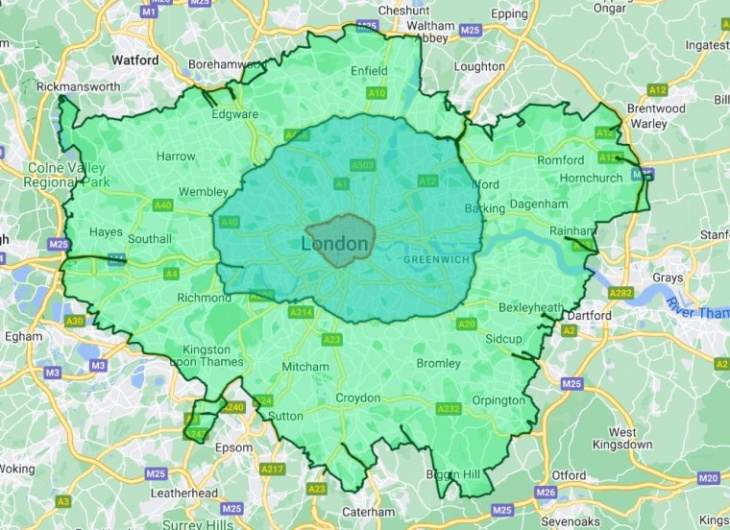 The area is being extended (Photo: TfL)

“But there is still far too much toxic air pollution permanently damaging the health of young Londoners and leading to thousands of early deaths every year, with the greatest number of deaths in the outer London boroughs.”

A public consultation found that 80 per cent of people living in the newly affected areas oppose the change.

Mr Khan’s opponents have criticised the decision at a time when many are struggling with the cost of living crisis, but the Mayor said “public health” has to be the most important factor.

Nick Rogers, transport spokesman for London Conservatives, said: “Now is not the time to hammer Londoners with a £12.50 daily cost-of-living charge. Residents have made their views very clear to the mayor: they do not want the Ulez expansion. The mayor must listen to them, scrap these plans and use the £250m saved on real measures that tackle air pollution.”

Brian Gregory, policy director at the Alliance of British Drivers, said the Mayor’s “whole basis for extending the Ulez zone on the basis of public health doesn’t stand up to scientific scrutiny. TfL has an enormous hole in its budget and Mayor Khan is looking to fill that hole by any means that he can.”

Do I have to pay the charge?

You can use TfL’s number-plate checker to see if you have to pay the charge for your vehicle.

The Ulez daily charge is:

This daily charge is in addition to the congestion charge if you drive in central London as well.

If vehicles meet certain emissions standards they are exempt from the fee. For petrol vehicles that is “Euro 4” and for diesel it is “Euro 6”.

Ulez is enforced based on the declared emissions of the vehicle rather than the age. However:

TfL says: “We prefer that you use a vehicle that meets the emissions standards rather than pay a daily charge.”

If you do not pay by midnight the day following your journey, you can be charged up to £180.

Will there be support or exemptions?

Some schemes will be available.

TfL writes: “From 30 January 2023, Londoners receiving certain disability and means-tested benefits can apply to our car and motorcycle scrappage scheme and receive a grant payment, or a grant payment plus one or two Annual Bus & Tram passes. A separate van and minibus scrappage scheme will also be available for sole traders, micro-businesses (10 or fewer employees) and charities.

“There will also be Ulez support offers for successful scrappage scheme applicants as well as offers for all Londoners to take advantage of, whether eligible for a grant or not.”

If their car does not meet emmission standards, Blue Badge holders need to pay the charge unless it is registered with the DVLA as having a “disabled” or “disabled passenger vehicle” tax class.

Keepers of vehicles registered in these tax classes benefit from a grace period where they are exempt from paying the Ulez charge until 24 October 2027.

London-licensed taxis are exempt, unless they have an older, more polluting taxi that is subject to a 12-year age limit, with newer, cleaner taxis extended to 15 years.

Keyword: Ulez expansion map: How to check if your car is Ulez compliant and where the new zone will cover in London

The Topspeed team is attempting to do simulator racing at a scale never before seen in Singapore. This resource-intensive approach aims to spread awareness about e-Motorsports locally. It also provides the general public with a relatively affordable way to sample the hobby. But relatively affordable doesn’t mean you’d be driving ...


View more: Get Your Professional Sim Racing Fix with Topspeed at Funan!

Winter presents a different and sometimes hazardous set of driving conditions - low visibility, snow and ice can all impact your driving, so follow our tips to stay safe...


View more: How to drive in winter

In case you weren’t aware, our co-founder Dom is a dad now. Although, with baby Alexia being born during the pandemic, she unfortunately hasn’t had the opportunity to see much of the outside world just yet. Now that the nation has mostly re-opened, though, a road trip seems like ...

Take the fitness and simulator tests seriously Don’t be afraid to ask questions Adapt to the machinery Be fast but don’t crash An unsung hero of the Award tests It’s almost time to reveal the winner of the 2022 Aston Martin Autosport BRDC Young Driver of the Year. At ...

On top of his KTM 890 Adventure R, Birch takes you through some gnarly tight trails in Idaho.


View more: Chris Birch Shows You How To Explore Idaho

What happens when your car is under recall? Car recalls for safety concerns with long waiting periods for a solution What should you do when a safety recall resolution isn’t immediately available? Can you return a car because of a recall? If you’ve ever received a car recall notice ...


View more: Consumer Reports Talks What to Do When There’s No Fix for Your Car’s Recall

Christmas don’t come cheap, and the last you want is an additional fine while driving one home Christmas tree shoppers who drive their trees home are being warned they could face fines of up to £2,500 if they aren’t careful with how they get their trees home. As huge ...


View more: Drivers warned they could be fined £2,500 while driving Christmas tree home - here's how to avoid it

If visibility is reduced due to fog while you’re driving, make sure you follow these safety tips from the AA. Driving in fog can be difficult and dangerous, especially considering fog is most likely to occur early in the morning and later at night, during key commuting times. To ...


View more: AA shares top tips on how to drive in fog

Understanding Adaptive Cruise Control (ACC) & How to Use It

How to navigate EV etiquette and New Zealand’s charging blackspots

5 Most Common Car Crashes in the U.S. and How to Avoid Them

How to Bring a Christmas Tree Home Tied to Your Car, SUV or Truck

Android Auto gets a new design: here’s how to try the new interface

How to Turn Your Ford Bronco Into a Monster Truck

How to Eat Food in a Car Without Making a Mess

Tips On How To Write A Robust Personal Statement

How to Write an Effective Essay

Here’s How to Avoid Screeching Windshield Wipers This Winter

How to find your nearest Tesco EV charging point

How To Solve The 2nd-Gen 4Runner’s Biggest Problem

Troubled Harrier ownership since day 1: No proper fix even after 1500km

You have too much ‘fluff’ in your expenses. Here’s how to cut it

3 Awful Car Smells and How to Fix Them, According to Consumer Reports

SEMA show to evolve into city-wide SEMA Week in 2023

Mini Will Teach You How To Use Manual Transmission In California

Motor Mouth: How to Vespa your way to Costa Rica

What to Do during a Tire Blowout and How to Avoid Crashing?

How to Find the Best Essay Writer

How to calculate the cost of your next trip