The hyper naked Beemer steps up to the M-trim. 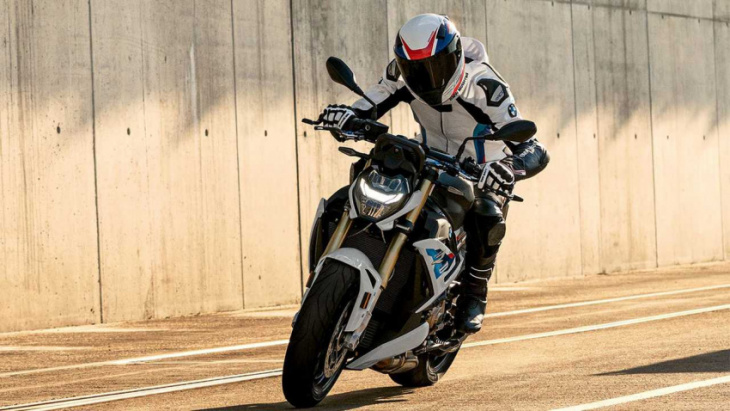 BMW’s S 1000 R does its own thing within the hyper naked category. While its European counterparts battle over horsepower figures, the sensible Beemer prioritizes everyday practicality. Sure, the Triumph Speed Triple 1200 generates 178 pony power, the KTM 1290 Super Duke flexes with 180 horses, and the Ducati Streetfighter V4 outruns them all with 205 horsepower, but the S 1000 R still lays down a respectable 165 hp.

Even so, BMW isn’t content with bringing up the rear. That’s what new type-approval documents for an M 1000 R suggests. The Bavarians recently applied the M treatment to the S 1000 RR platform with the homologation special M 1000 RR. While the M 1000 R naked bike won’t meet any racing needs, the up-spec trim should certainly put the super naked community on notice.

According to the type-approval files, the M-prepped R will also receive Munich’s ShiftCam wundermill, which will boast a horsepower rating of 207 in 2023. That four-banger will push the M 1000 R’s top speed to 174 mph, marking a considerable gain over the S’s 158-mph top speed.

The documents, however, don’t disclose the M-trim’s suspension components. Though, we wouldn’t be surprised to see the same semi-active system from the 2022 S 1000 R M Package make an appearance. Even without the full specs, we do know that the chassis will undergo several changes due to the one-inch-longer wheelbase, 2.5 inches of additional height, and 200-section rear tire.

Without the approval docs hinting at cosmetic changes, we don’t want to speculate too much on the model’s aesthetics. We could certainly envision a set of winglets and a mini front fairing, but only BMW’s official announcement will unveil those details.