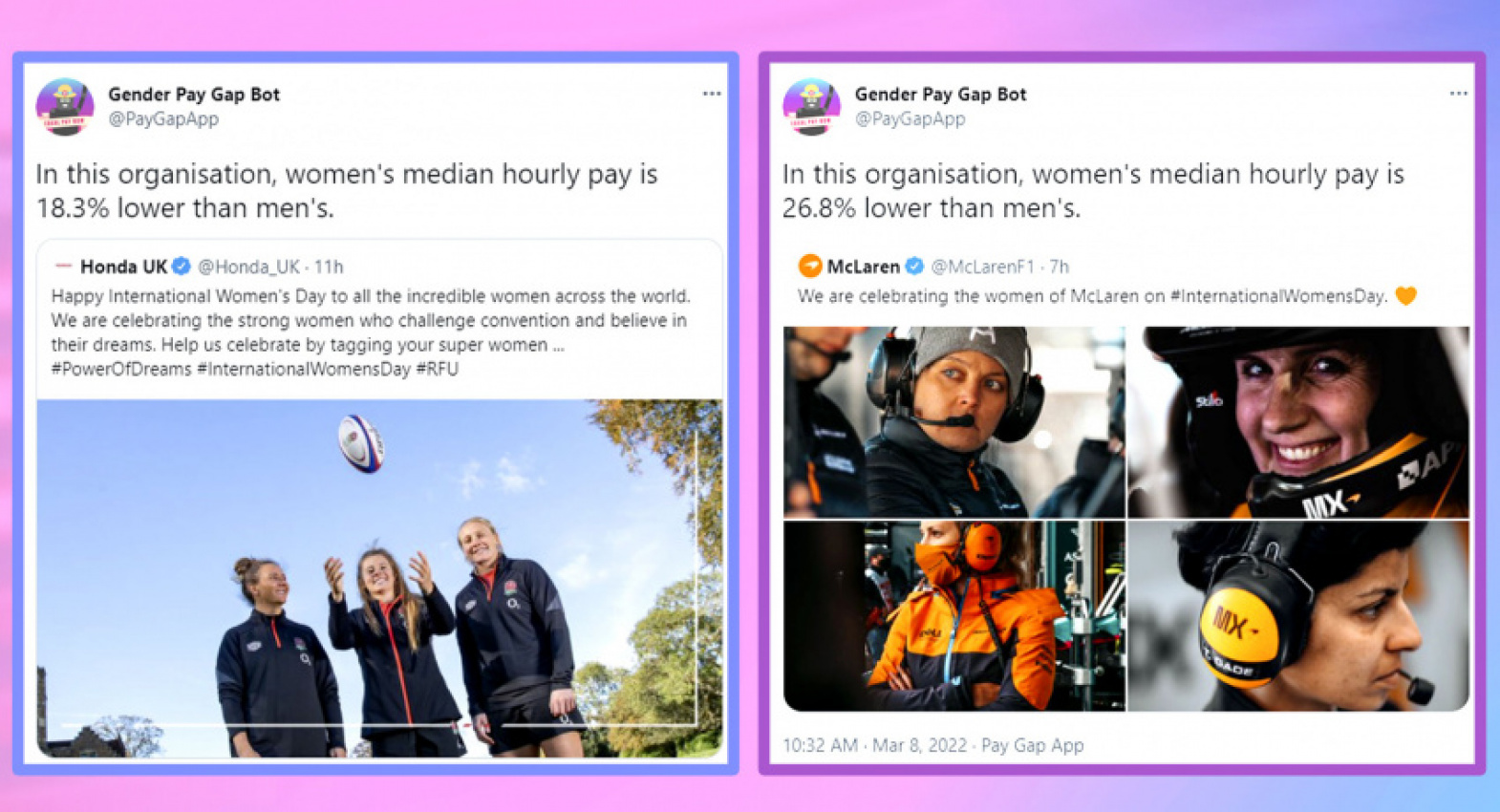 Companies that tweet out messages in support of International Women’s Day in the UK but do not back those up with pay equity are being taken to task by a Twitter bot, which has posted about McLaren Racing, Honda U.K., and Multimatic today.

The Twitter account @PayGapApp says in its bio section that if employers “tweet about International Women’s Day, I’ll retweet your gender pay gap.” In its header image, meanwhile, it writes “Deeds not words” and “Stop posting platitudes. Start fixing the problem.”

After the @McLarenF1 account posted a photo of women who work for it with a caption that read “We are celebrating the women of McLaren on #InternationalWomensDay.” The bot retweeted that with its caption stating that “in this organization, women’s median hourly pay is 26.8% lower than men’s.”

The U.K. government’s official Gender pay gap service, confirms the bot’s tweet. In its report, the government writes that women are paid 73p for every £1 ($0.96 for every $1.31 USD at current exchange rates) that men are paid. That is exacerbated by the fact that women occupy 25 percent of the lowest paying jobs at McLaren Racing Limited and just 6 percent of the highest-paying jobs.

After Honda U.K. posted its own message about International Women’s Day, the bot responded that women’s median hourly pay is 18.3 percent lower than men’s at the organization. Again, this is backed up by the U.K. government, which reports that women are paid 82p ($1.08 USD) for every £1 ($1.31 USD) that men are paid. Again, the company employs fewer women at the higher end of the pay scale (just 23.1 percent of the company’s biggest earners are women) than they do at the lower end (54.3 percent).

In this organisation, women's median hourly pay is 18.3% lower than men's. https://t.co/r2SxhanPuq

Finally, the bot tweeted that at Multimatic, which produces race cars among other automotive products, women’s hourly pay is 22.7 percent lower than men’s. In the company’s tweet, it admitted that motorsports was a male-dominated field and quoted a Road & Track Magazine saying that Leena Gade, a vehicle dynamics manager and race engineer, was helping to turn the tides in that respect.

It’s not just in the male-dominated world of motorsport that the gender pay gap is upheld, though. A look through the @PayGapApp’s activity today shows a stunning number of companies around the U.K. that are reinforcing the practice.

In this organisation, women's median hourly pay is 22.7% lower than men's. https://t.co/WuJoJ0NIXg

Apparently, it was a surprise to McLaren.

McLaren Artura supercar marks new chapter in tech and performance… and we promise it’s quite a green car Singapore – On the eve of a Formula 1 weekend, and in a room filled with McLarens of past and present, including a Mercedes-Benz SLR McLaren cousin, McLaren Singapore launches the ...


View more: McLaren Artura supercar marks new chapter in tech and performance… and we promise it’s quite a green car

A McLaren P1 has been destroyed by Hurricane Ian. The current was so powerful it even pulled the car out of the owner's garage. Mother nature has no mercy and when it decides to throw us a hurricane, it can sweep away all of our prized possessions, including our beloved ...


View more: McLaren P1 Destroyed By Hurricane Ian Was Only In The Hands Of Its New Owner For A Week