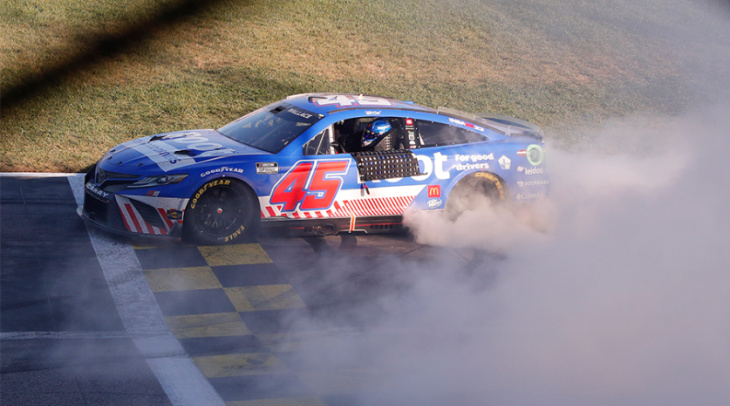 There was no keeping Bubba Wallace from victory lane Sunday at Kansas Speedway.

After dropping back to 30th with a loose wheel during the middle of the Hollywood Casino 400, Wallace picked his way through the field and led the final 43 laps to score his second NASCAR Cup Series victory.

Though the driver of the No. 45 23XI Racing Toyota dealt with turmoil throughout the race, his resiliency to push through was the deciding factor in the 28-year-old’s triumph.

“We had a loose wheel, so something went wrong. We really capitalized, though, I think, in those moments,” Wallace said. “Before I would get frustrated. Don’t get me wrong, I was frustrated. I thought we had a really good car. You never know what’s going to happen when you get back there. I knew we had a lot of laps in front of us. Take our time, get back up through there and held three or four laps. We were already top 20, I think.

“Just had to have a level mindset going into that. Like, ‘OK, we’re going to bounce back from some adversity.’ 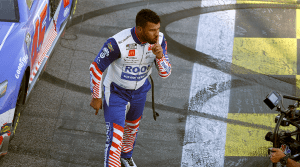 Wallace gestures to the camera after his victory in Kansas. (Meg Oliphant/Getty Images)

“Then, honestly, I started calling the shots. I said, ‘When we break the threshold of fifth, it ramps up, and we need to be ready for that.’ Then I said, ‘Once we get the lead here, our balance has to be able to hang on to that,’ and it fell right into our hands.”

The leadership shown within the 400-mile race helped lift the No. 45 team that had dealt with pit road issues earlier in the season.

Through those trials, brought a more prepared and confident 23XI Racing team, with longtime NASCAR crew chief Bootie Barker helping to put the pieces together on race day.

“Really since we’ve unloaded all weekend as far as Bubba goes, I mean, when you have positive momentum when you do things right – I’m very careful to say this. I mean this in — I don’t know, it’s easy. OK, but it’s not easy. My point is,” Barker said with his voice trailing off.

“Yes. Practice goes smooth,” Barker continued. “He and I talk. We don’t even have to talk long. He tells me what he needs. We work on it. We go fast.

“You qualify well. You get a good pit selection. It’s just all of those things stack up. That’s all the things you need to do.

“Right now, it’s definitely we’re clicking, we’re doing well,” Barker added. “As far as how he drove the race, I didn’t say this to him, think about this: At the end of the race, he takes the lead or he takes the lead on his own and stretches the lead. By stretching the lead, it gives me the ability to just go — J.R. (Houston, strategy and system engineer) and I sit there and call the races. We knew with the lead he got us, all we had to do was protect behind us. We had a hedge to do that. That makes it easy.

“Then the pit crew, he got on and off pit road well. Better than anybody else. They had an awesome stop. Then you’re gone. You’re out front. You’ve got it.”

Barker said Wallace was fortunate to have a commanding lead. 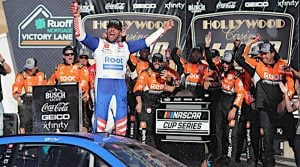 “A testament to Bubba, though, he didn’t push his car. I let him know how far he was ahead,” Barker noted. “Really he rode. He saved his car. He didn’t get anxious. He didn’t make any mistakes. He didn’t burn his stuff up. He knew the guys were behind him, and he just ran what he had to do.

A big reason the moment wasn’t too big for the No. 45 team on Sunday, was because of its recent consistency.

Over the past 10 races, Wallace has the highest average finish in the garage area of 10.1, one position better than Christopher Bell (11.6), who is second-best over the last 10 events.

The uptick in performance has come from Wallace feeling more comfortable testing the limits of his Toyota race car.

“What I struggled with in the Cup car previously was confidence in the car and actually trusting it,” Wallace said. “With this car I was sidelined. I had shoulder surgery right after the season and I didn’t get much testing, but I told myself going in that I needed to step up and do a better job and push the car to its limits.

“If you don’t do that, you don’t know where the limit of the car is,” Wallace continued. “The last — really all year, like Bootie said. We’ve been doing a good job. The results have not shown that, but if I take a minute and brag about self, this is my best season ever of climbing in the race car and being, like, ‘All right, pal, it’s time to go to work, and you leave it all out there and not regret any decision that you make.’ Look how we’ve been running.

“It all starts with self. If you don’t show up with confidence, then you’re not going to run very good, so you definitely have to show up with that.”

As Wallace continues to pursue the owner’s championship aboard the No. 45 Toyota with teammate Kurt Busch sidelined, his outlook is simple:

“You know, to win it in this fashion, yeah, it’s definitely really cool. We’ve talked about when we go to the speedways and kind of not so much the rest of the tracks, so I want to start changing that,” Wallace said. “We’ve been able to show up these last two months or so, all different types of race tracks, and be talked about. That’s cool. It’s a step in the right direction.

“We just can’t get complacent. We have to keep going, keep pushing for more. This is great, but we have to continue to go back out and battle. I appreciate the opportunity that I’m in right now with the team that I have and want to keep going.”