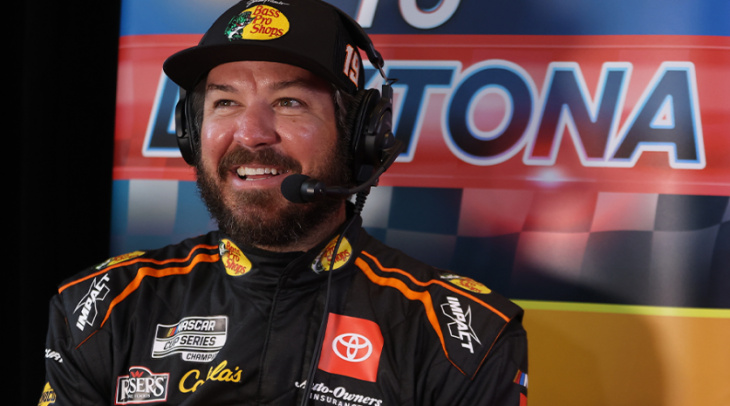 DAYTONA BEACH, Fla. — Before packing up to head to Daytona International Speedway for Saturday night’s regular season finale for the NASCAR Cup Series, Martin Truex Jr. found himself on the outside of the 16-driver playoff picture, 25 points behind Ryan Blaney.

Though after Thursday’s news that Kurt Busch would miss the beginning of the NASCAR Cup Series playoffs, it changed the tide for Truex’s season.

With Busch unable to compete, 23XI Racing withdrew the medical waiver it requested Busch to be eligible for the playoffs, vaulting Blaney and Truex up one position in the playoff standings.

“First off, we’re all thinking about Kurt (Busch) and wishing him the best and, hopefully, he gets better and he can come back and do what he loves to do,” Truex said. “He’s been a good teammate this year. First time I’ve worked with him and you know, Toyota that’s been fun. So wish him the best and yeah, for us, we’re not in until it’s over tomorrow night. I don’t really have any feelings either way. We’re here to race and excited and two scenarios, one we get in on points, or we win the race. That will be optimum because of the points situations. But yeah, we’ll see. You know, we just kind of how it all plays out and we can make our own way in there.”

Despite a 187-point advantage over Erik Jones, Truex can still be knocked out of the playoff picture if a winless driver inside the top-30 in points wins on Saturday night. 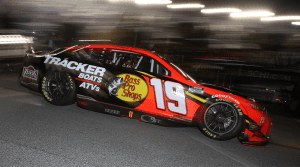 However, Truex and the No. 19 Joe Gibbs Racing team know their game plan and have confidence in their Toyota Camry after a stout run in the season-opening Daytona 500.

“I think we need to go race and try to stay at the front and try to get stage points,” Truex said. “You know, like I said, best case scenario for us would be to go out and win because the owner’s championship points side of things. You know, what, you have to fall back on that last spot. We won’t be in on owner’s points. So it’s not really what you hope to accomplish. I think we had a really strong car here in February. Led a ton of laps won two stages. Then we got kind of banged up and then finished kind of torn up so you didn’t have the speed at the end of the race. But I had a really strong day going and Talladega went good as well.

“So, I feel like our car is really fast here. And, hopefully, we can take advantage of that. Would be a fun way to win one here with everything on the line.”

The unexpected is expected at Daytona, especially with the high stakes of a post-season run on the line.

Truex has been a staple in NASCAR’s playoffs since his 2017 championship run, with four final four appearances in the last six seasons.

For Truex, it’s been unfamiliar territory this season. The 2017 Cup Series champion and the No. 19 team have been challenged throughout the season with the introduction of the Next Gen race car.

In light of only scoring one pole and 11 top-10 finishes on the season, Truex has been one of the more consistent drivers, currently sitting sixth in the regular season standings.

However without a victory, Truex’s championship hopes hang in the balance of a 39-car pack of cars stampeding around the high banks of Daytona.

“You never know what to expect here but you know it’s going to be wild and crazy and there will be a lot of crashes,” Truex said. “Rain in the area. Who knows when it could end. Does it even go the full distance? Weather tomorrow looks about like today. So you know, they brought the last regular season race here for a reason. Right? Drama and craziness and that’s what we’re going to see. So that’s why for me, I’m just like, ‘We’re just going to go out there and race and try to put our best race out there and hope that we can get it done,’ but I don’t have feelings either way, right now, whether we’re going to make it or we’re not.

“We’re going to go race and see how it all unfolds. And there’s a lot of things that can happen and we’ll just see what happens and take it from there.”