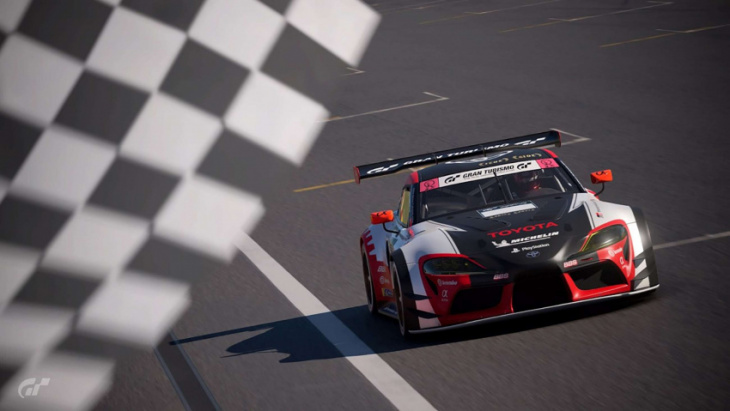 Subaru had won the first online round courtesy of Takuma Miyazono, and then taken victory in the first live Gran Turismo event for over two years – despite the Japanese driver’s absence through illness – with Kylian Drumont driving a double-stint. The rapid French driver, in his first season in the series, returned for the second online round but faced a literal uphill challenge as Circuit de Spa-Francorchamps was hosting the race. That’s not the ideal venue for the Subaru BRZ, with its poorer straight-line speed.

So it proved in qualifying as defending series champion Toyota, through Igor Fraga, took pole position for the race ahead of Mazda’s Giorgio Mangano. It was Toyota’s third successive pole position, although its poor fuel consumption has meant it hadn’t converted them to wins yet. BMW’s Erik Cases Vasquez would take third ahead of Drumont’s Subaru, with Olympic bronze medallist Baptiste Beauvois in fifth. With drivers required to use both medium and soft compounds in the ten-lap race it was a surprise to see Fraga the only man on the softer tyre, and he immediately used it to good effect to drag away from Mangano. Mangano’s pace was hardly lacking, as he built his own gap to Cases. Beauvois took fourth spot from Drumont halfway up Kemmel straight as the Subaru’s top speed issues were highlighted by the Mercedes-AMG strolling past.

At the front, Fraga had built a seven-second advantage by the time he was first to dive into the pits on lap four, switching to the medium tyre. Mangano and Drumont opted for a stop next time round to pick up soft tyres for the final half of the race, with Beauvois and Cases stopping at the end of lap six. The outlap on soft tyres allowed Drumont to get the undercut on Cases, while disaster struck for Beauvois who crossed the pit lane line at the unfamiliar 24-hour circuit layout – added to the game in April – and picked up a three-second penalty. That would put the Subaru up onto a podium spot.

Further up the field though Mangano was struggling to cut Fraga’s advantage despite the tyre differential. The Mazda was clearly faster, but not by the 1.4 seconds a lap required, allowing Fraga to cruise to a comfortable victory – and three points – by more than four seconds. Drumont took third, and the final point, four seconds further back.

Subaru, the only brand to earn points in all races this season, still leads on ten points. Toyota moves up to second on seven, with Mazda jumping two places to third on five. There’s one last chance to earn World Series points in Round Three in October before November’s live World Final in Monaco.

Final qualifying for the 2023 Porsche Esports Supercup has got underway with the Contender Series.

This six-race championship takes the best drivers from qualifying earlier this year and pairs them with the bottom 15 racers from the 2022 main series – along with five selected wildcard drivers from various national Porsche championships – to fight for the 15 remaining spots on the 2023 grid.

The format mirrors the main PESC event, with qualifying for a Sprint race, then a reversed top-eight grid for the feature race. Denmark’s Lasse Bak, winner of the qualifying series, took the first pole position of the season in the race at Hockenheim by a relatively comfortable 0.11 seconds from Alexey Nesov, and converted that to victory in the sprint by almost three seconds.

With the reversed-grid it was Jeff Giassi on pole from Peter Berryman. Giassi, technically the top-ranked driver due to his 16th place finish in PESC 2022, ran a cool lights-to-flag win, holding Berryman up enough that his Redline team-mate Gianni Vecchio would take second ahead of the British driver. 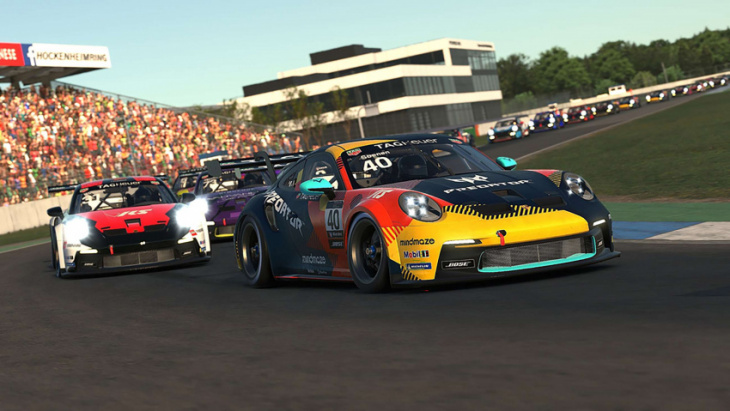 Starting on 14 October, the series will consist of 12 races mirroring the real championship. Donington Park, Knockhill, Oulton Park, Silverstone, and Snetterton will each host a double-header event through October and November before the series comes to a close with two races at Brands Hatch on 2 December. The championship will be staged on the iRacing platform, using the fictional Formula IR-04 car similar to the Tatuus F4-T421 used in the real series. Each of the first five rounds will be broadcast live on RaceSpot TV on YouTube, with the official iRacing channel live-streaming the finale.

Drivers will race as teams of two, although there’s no announcement yet on how many drivers or teams will be involved. There’s a £6,000 cash prize pool for the championship’s leading drivers, while the overall series winner will be invited to the “Night of Champions” awards event alongside other champions of Motorsport UK series.

Welcome to FOS Future Lab where we report on the latest visions of future technology. We’ll be boldly covering flying cars, hoverboards, jetpacks and spaceships with plenty of down to earth topics in between.