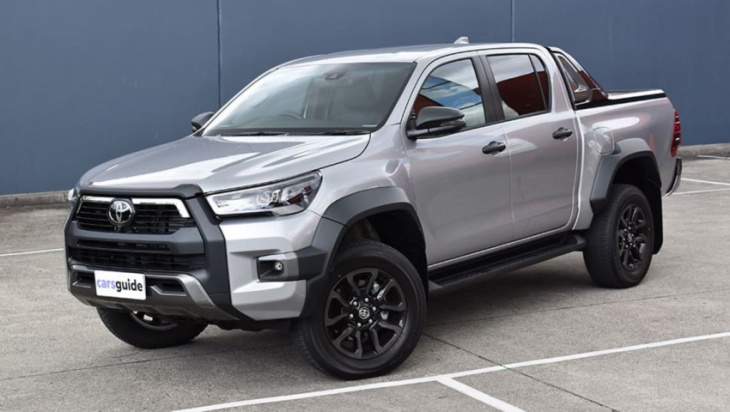 The Toyota HiLux reclaimed its crown as Australia’s best-selling vehicle in November, holding off the new Ford Ranger to finish in first place.

Some 5440 examples of the Toyota HiLux found homes in November, compared to 5073 examples of the Ford Ranger – which finished the month in second position. Toyota claimed third with the Corolla (3732 sales), followed by the MG ZS (3051 sales) and the Toyota LandCruiser (all styles, 2296 sales).

The ute result was a reversal of last month, when 5628 examples of the new Ford Ranger found homes in October. HiLux sales were 4884.

November was a strong month across the board for new cars in Australia, with a total 95,080 vehicles sold – up almost 18 percent on the same month last year.

Importantly, it also brings the annual sales tally to 993,509, with the Federal Chamber of Automotive Industries (FCAI) predicting Australia’s one-millionth new car will be sold some time in the next week or so.

One million new car sales is considered something of a yardstick in the industry, and despite growing queues and enthusiasm-dampening wait times, Australian buyers will ensure we finish comfortably above that number in 2022.

“The automotive sector is continuing to recover from pandemic related shutdowns, a global shortage of microprocessors and the general supply chain uncertainty we experienced over the last two years,” says FCAI Chief Executive, Tony Weber.

“The industry will deliver the one millionth vehicle to the market in 2022 next week. While this is positive news, many customers are still facing extended wait times for their vehicle, with expected delivery dates for some models beyond 12 months.”

The sale of low- and zero-emission vehicles continue to soar (though the numbers are heavily skewed by the popularity of the Tesla Model Y and Model 3 in Australia) with a total of 13,415 vehicles sold in November.

But while we still love hybrids, and are quickly embracing full-electric models, plug-in hybrids are yet to capture a significant market share. Last month, 4457 battery electric vehicles were sold, along with 8529 hybrids, but just 429 plug-in hybrid vehicles found buyers.

Kia’s result was enough to put some clear air between it and sister brand Hyundai, with Kia now third on the overall sales charts with 72,700 sales, some 3700 sales clear of Hyundai, which has 68,911 sales so far this year.

Barring some kind of disaster in December, it should mean Kia finished the year ahead of its traditional “big brother” for the first time in Australia.

How many trucks does Ford offer? The Ford Ranger is reportedly the most reliable option How reliable are other Ford trucks? Ford has no shortage of pickup truck options. There are many to choose from available in various sizes with a good range of towing capacities. You can get ...


View more: The Best Ford Truck According to This Critic May Surprise You

Ford is making a comeback to the pinnacle of motorsports, returning to Formula 1 more than two decades after dropping out. The automaker will reenter F1 with Red Bull in 2026, when new regulations will require teams to increase electrical power by as much as 50% and use fully sustainable ethanol as fuel. ...