Toyota Innova Crysta saw the highest sales in the company portfolio in August 2022 with 6,036 units sold during the month 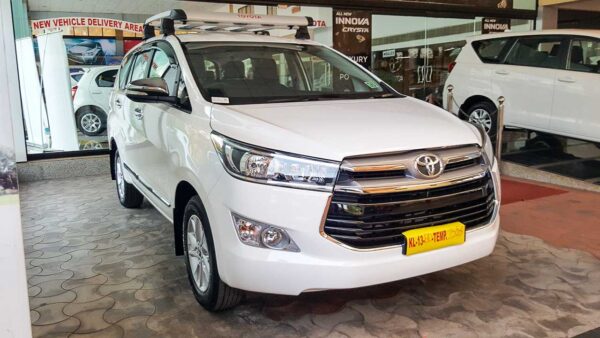 Toyota Kirloskar Motors was the 6th best-selling automaker in India in August 2022. It commanded a market share of 4.6 percent, down 0.3 percent when compared to 4.9 percent held in August 2021.

Toyota Innova Crysta at No. 1

Innova Crysta was the most sold model in August 2022 with sales of 6,036 units, up 5 percent when compared to 5,755 units sold in August 2021. It was a 13 percent YoY de-growth as against 6,900 units sold in July 2022. Toyota has launched the Limited Edition of Innova Crysta petrol. The petrol, manual variant is priced at Rs 17.45 lakh while the petrol, automatic is priced at Rs 19.02 lakh (both prices ex-showroom).

Next up was the Toyota Urban Cruiser of which the company sold 3,131 units in August 2022, up 18 percent from 2,654 units sold in August 2021. MoM sales however, dipped 53 percent from 6,724 units sold in July 2022. Earlier this month, Toyota introduced the Urban Cruiser Hyryder in the SUV space that sees it competing with the likes of Hyundai Creta, Kia Seltos, MG Astor, Skoda Kushaq and Volkswagen Taigun. 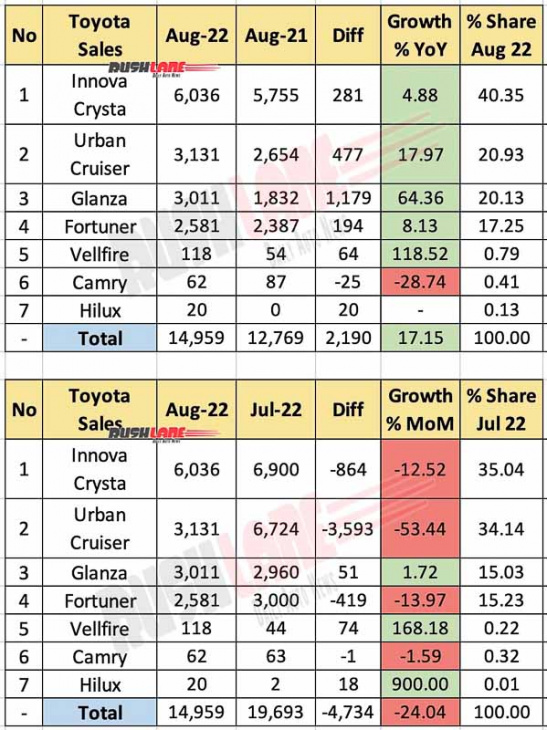 Toyota Vellfire sales saw the most percentage increase both in terms of YoY and MoM. YoY sales increased by 119 percent to 118 units, up from 54 units sold in August 2021. MoM sales were higher by 168 percent from 44 units sold in July 2022. Sales of the Toyota Camry on the other hand, dipped YoY and MoM by 29 percent and 2 percent respectively to 62 units. The company had sold 87 units in August 2021 and 63 units in July 2022.

Toyota Hilux pick-up, launched earlier this year has seen 20 units sold in August 2022 up 900 percent MoM from just 2 units sold in July 2022. Hilux is a lifestyle pickup truck based on the IMV2 platform which also underpins the Innova Crysta and Fortuner.