It seems only in very recent times, the Japanese automaker may finally begin to shift its approach to the future. 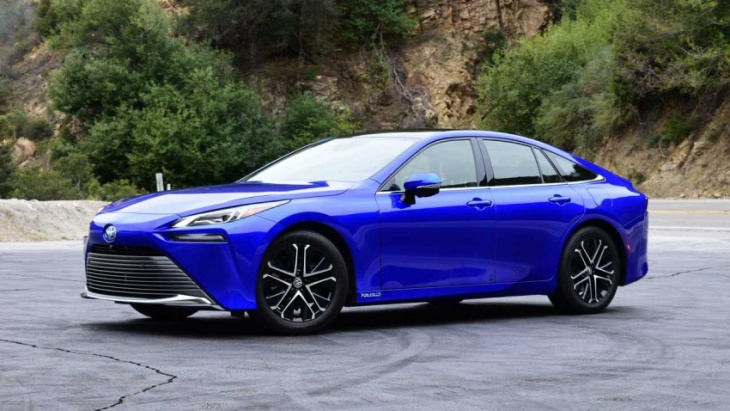 Japanese automaker Toyota – one of the largest and most successful car companies in the world – now finds itself sharing space with major oil and gas companies as one of the “world’s most obstructive companies on climate policy” in 2022.

It may come as a surprise for some fans of Toyota and its fuel-efficient hybrid vehicles to learn that it ranks near Chevron and Exxon Mobil when it comes to its overall climate policy footprint. This all comes from data compiled by InfluenceMap, a company that “provides data and analysis on how business and finance are affecting the climate crisis.”

InfluenceMap suggests it’s using reliable and evidence-based data and assessments, along with rigorous methodologies to determine how companies are handling climate policy. The company’s goal is to encourage change, which could help solve the environmental crisis across the globe. Clearly, there’s some environmental advocacy here, so we take it with a grain of salt, but we do know that Toyota has built this reputation for itself over year and years.

To the folks who read InsideEVs and other similar websites, you probably aren’t surprised that Toyota has secured a spot on such a list. We’ve reported time and time again about Toyota’s slow movement toward fully electric vehicles, its false advertising related to its hybrids, and its focus on hydrogen-powered cars, which has never gained any steam.

Toyota has gone so far as to admit publicly that it’s not going to move quickly with electric car development and production. Its executives continue to insist that people don’t want EVs, and they’re now saying that since Toyota produces so many hybrids (which require gasoline and have tailpipe emissions), it makes up for its lack of EVs. To take it even further, the company recently noted that its hybrids may actually be helping more than electric cars to curb climate change.

According to an article published by Electrek, a recent Greenpeace study ranked Toyota last among the world’s top 10 automotive companies as far as its decarbonization efforts are concerned. The study found that Toyota (via Electrek):

Regardless, even when such points have been spread by the media and Toyota is made aware of the concerns, it’s been staying the course. The automaker’s philosophy is to “win” no matter what it takes, even if that means throwing climate policy out the window or lobbying against the efforts of environmental groups and politicians.

Check out the most recent list published by InfluenceMap, which ranks the “most negative and influential companies on climate policy” of 2022: 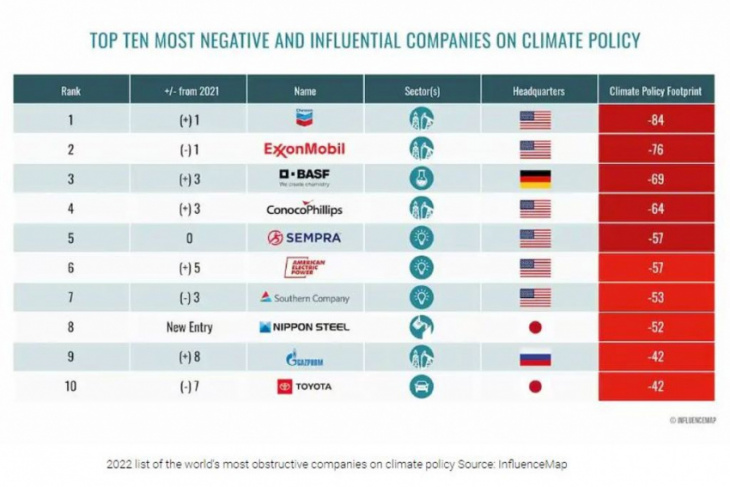 Sure, Toyota is behind nine other companies, but it arguably shouldn’t be on the list at all. There are no other automakers represented on the chart above (BMW placed at No. 16). This is due in part to the fact that Toyota’s rivals, whether they want to or not, are seemingly working harder than the Japanese automaker to adhere to ever-changing climate policies.

“Many of the companies on the list have top-line commitments to addressing climate change, but continue to push back on specific policies designed to achieve that.”

Toyota has made notable improvements to its climate policy engagement, but it’s still arguably the most negative company in the transportation world. Moreover, it’s still the leader in the segment when it comes to lobbying against climate policy and the eventual elimination of gas-powered cars.

Thankfully, it appears Toyota is just now beginning to see the negative impact of its policies. The automaker says it’s now on the fast track to rebooting its future EV policy. Some of the 30 new EVs the company announced last year will no longer come to market. However, the $38-billion plan to readdress its electric car future is reportedly underway, and sources familiar with the matter have noted that the upcoming plans will be much better.

Keyword: Toyota Ranked As One Of Most Negative Companies On Climate Policy