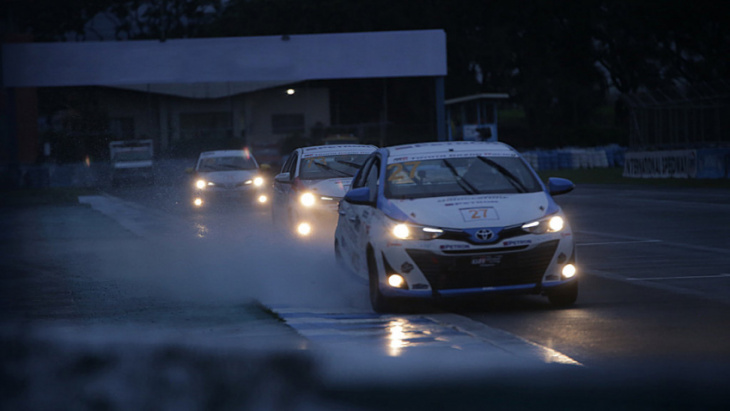 Around 55 racers across the Super Sporting, Sporting, and Promotional classes of Circuit Championship and Autocross Challenge all gathered at the Clark International Speedway last November 19, 2022, for the ultimate finale of this year’s TGR Vios Cup season.

It was a season finale to remember as many of the last leg’s teams ultimately sustained their momentum to win podium finishes for their racing teams. Successfully pushing the pedal to the metal are the second leg’s top finishers, who took home the championship for their respective categories.

Some of the race challenges in the latter part of the racing day witnessed extreme racing conditions as the rain started to pour at the Clark International Speedway. This made every class’ win even more worth all the strategic clutches and drifts throughout the wet speedway.

It was quite an eventful weekend for the Obengers Racing Team as Inigo Anton also bagged the top spot for Race 9’s Super Sporting Class, with Red Diwa finishing second, and John Dizon, also from Obengers Racing, finishing in third.

Autocross Challenge racers also had their fair share of the wild turns at the tracks, but this did not stop the previous leg’s winners from still finishing in their respective top spots.

The influencers also showed what they got when it came to being the star on the race track. Bringing home the Promotional Class top spot was Miguel Romulo, who bested two other strong contenders, Ashley Gosiengifiao, who finished second, and Carla Lizardo, who took third place.

It was a quick rise to the top spot for Enzo Pineda, who championed the Influencer Sporting Class, with Jules Aquino and Aaron Villaflor eventually claiming the second and third spots, respectively.

In the GR GT Cup Class of Autocross Challenge, Russel Reyes was champion whose performance upgraded from being second during the previous leg to now gaining the top spot, became a challenging yet fulfilling feat. Jether Miole finished second, while Mark Elman claimed the third spot.

Following the last leg of TGR Vios Cup, TMP will soon announce overall season champs this December to officially wrap up the season and award the races who really championed the competition from start to finish.

With the TGR Vios Cup 2022 season coming to a close, there’s a lot more to expect for next season as TMP continues to level up and bring the love for local racing to motorsports enthusiasts nationwide. No pumping of brakes here, with TGR Vios Cup gaining its speed for more racing thrills for the next season.