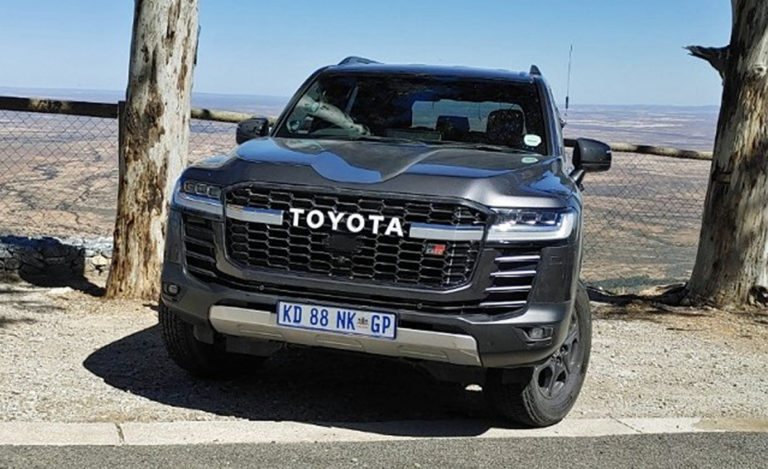 The new Land Cruiser 300 is said to be an overlander rather than an off-roader, and this became an essential distinction when we began our driving adventure in the Western Cape – taking on an 800km trip traversing the backroads of the West Coast.

Toyota’s Land Cruiser has been the market leader for big SUVs in the past few years, but with competition from the Land Rover Defender, the Nissan Patrol, and a slew of softer SUVs from nearly every major name, the job of maintaining that share is not getting easier.

As such, South Africa received three variants of the new 300 series – the utilitarian GX-R, luxurious ZX, and luxuriously-rugged GR Sport.

The updates are extensive, but for the casual observer, it might be difficult to tell that this is a completely refreshed model.

The exception is the GR Sport variant, which dials up offroad athleticism to a new level and stands out from the old Cruiser and current competition.

An important part of the change in the new Land Cruiser 300 is the engine.

There are no more V8s, and in their place are twin-turbo units that are lighter and more compact, efficient, and powerful.

Mated to a new 10-speed automatic box, the goal is efficiency – as loosely as that “goal” can be for a 2.5-tonne SUV.

The claimed fuel consumption figures and real-world figures will take quite a bit of work to match, but as expected, the diesel units do get close to the claimed figure of 8.9l/100km – at around 10l/100km. 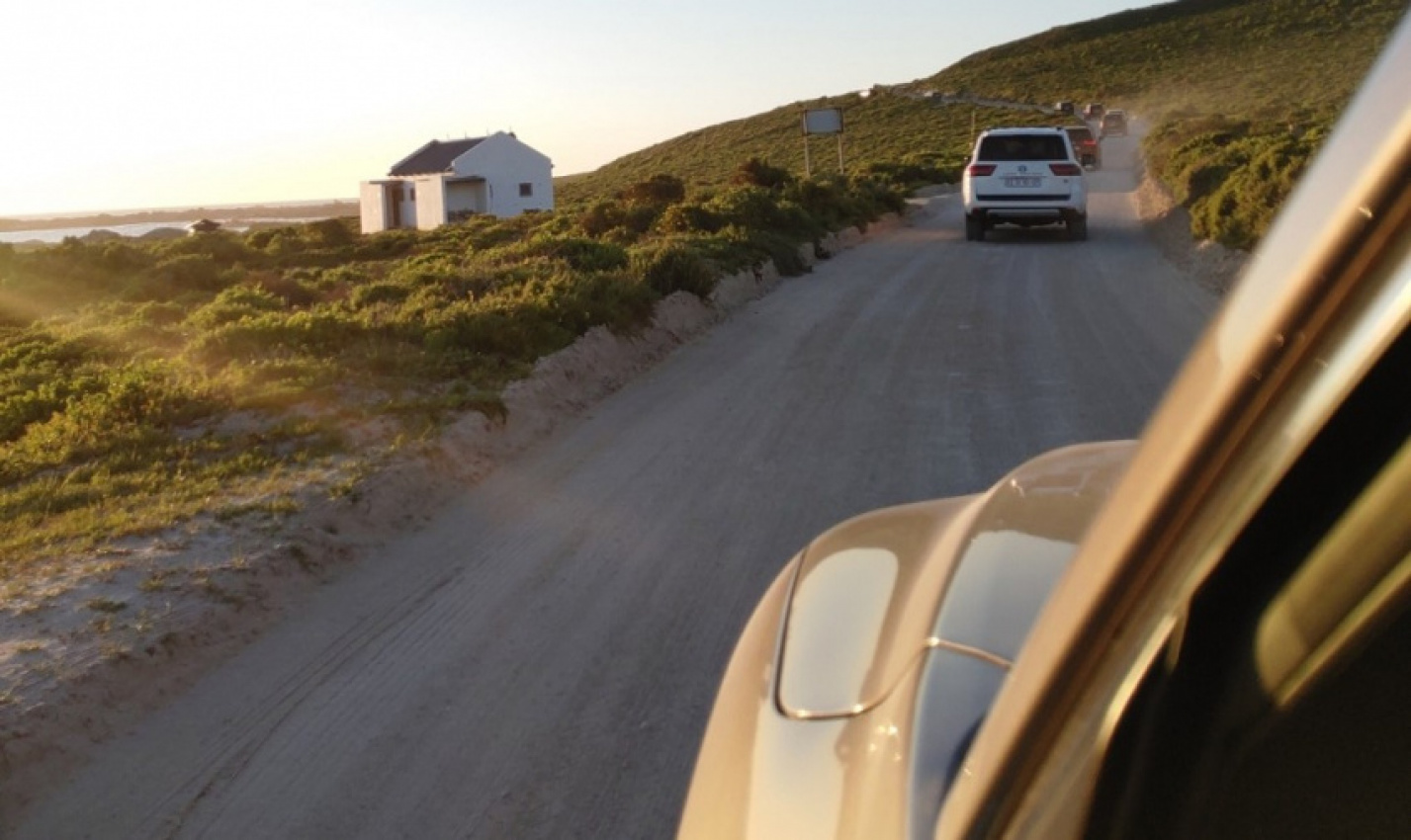 The more things stayed the same, the more they changed

Land Cruiser drivers will appreciate that much of the Land Cruiser 300 stayed true to the outgoing 200-series.

It is roughly the same size, being based on the same ladder-frame chassis, independent front suspension, and a continuous axle with longitudinal bars out back.

But despite these similarities, every component has been rethought.

The track is widened and the engine is placed further back and lower in the engine bay, resulting in a vehicle that is far easier to drive and less “top heavy” at highway speeds.

The ride and steering character, I found, are then largely dependent on the model selected.

The ZX, which is styled more like a luxurious boulevard cruiser, feels a little less urgent, while the GR Sport has a more sporty character which in part is also due to its unique Electronic Kinetic Dynamic Suspension System (E-KDSS).

On flat ground, both the ZX and GR Sport provide an admirable ride, tracking true and soaking up any imperfections.

The fact that Toyota has managed to achieve a ride so luxurious and compliant across various surfaces without using expensive air suspension is a feat of engineering.

The GR Sport takes it a step further, though, with the E-KDSS system.

They also hold the key to the GR Sport’s superior on-road manners, which is achieved by locking the roll-bars together for enhanced stability and reduced body roll. 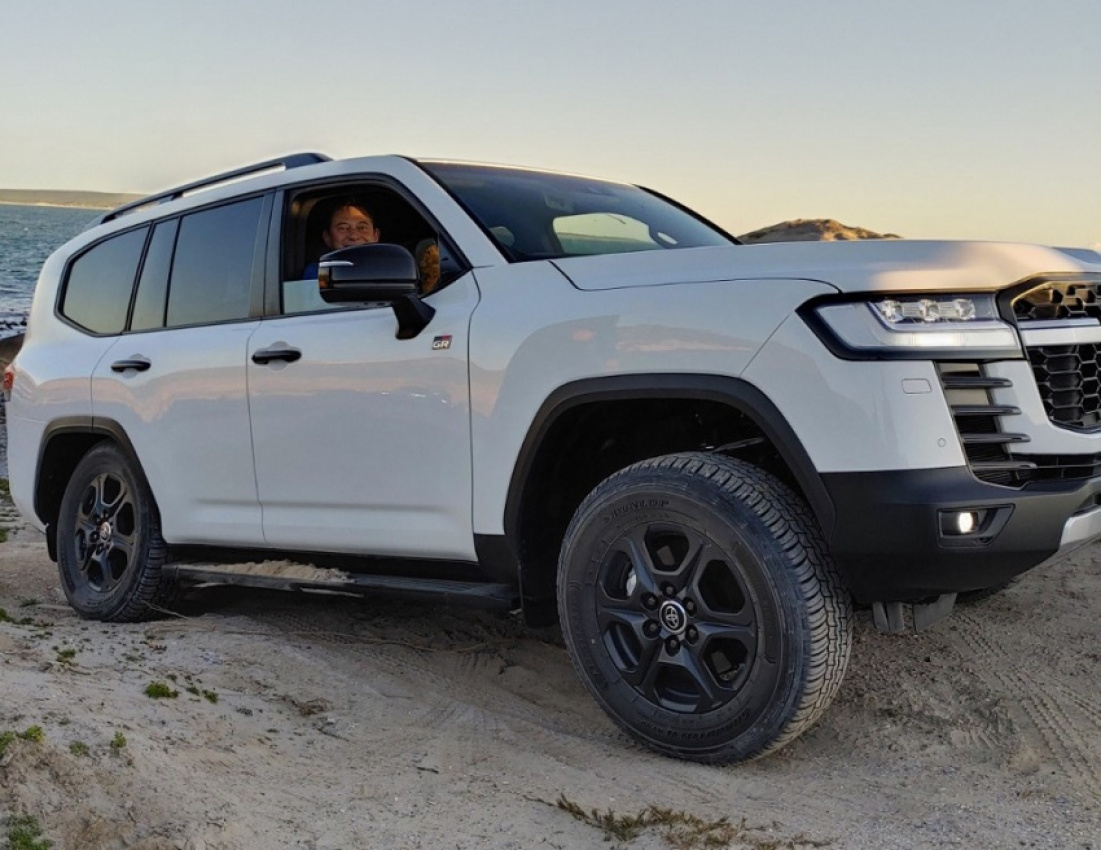 I was fortunate enough to enjoy the GR Sport on a 40km stretch of road, including the Van Rhyns Pass, and can say that the breadth of capability provided by this variant is worth the extra asking price.

Comfort and Sport modes are a matter of turning a dial and in the GR Sport’s case, it results in sharper throttle response, greater stability, firmer steering, and tauter handling that can be immediately felt.

Shortly after I swapped into a ZX for the last 90km of dirt, a twist of the drive mode dial to comfort meant that at times I forgot I was on a road that would have rattled my teeth loose had I been in my normal city-slicker SUV.

I was then reminded that what we had tackled in the first 400km was overlanding – a long distance over a mix of roads – and both the ZX and GR Sport handled this with ease.

To prove a point, the team from Toyota set out a challenging course for the GR Sport to tackle. This included proper off-road scenarios of large rocks, water wading, and pronounced ruts.

Some claimed it to be one of the most challenging routes they’d tackled, and not a single car returned with missing bodywork – which is a testament to the prowess of the Land Cruiser on multiple terrains.

I would not want to try that course in the ZX, though, which would have surely resulted in a costly scrape on the shiny alloy wheel or front apron – due to the reduced approach angle of 24 degrees.

This is compared to the 32 degrees on the GR Sport. 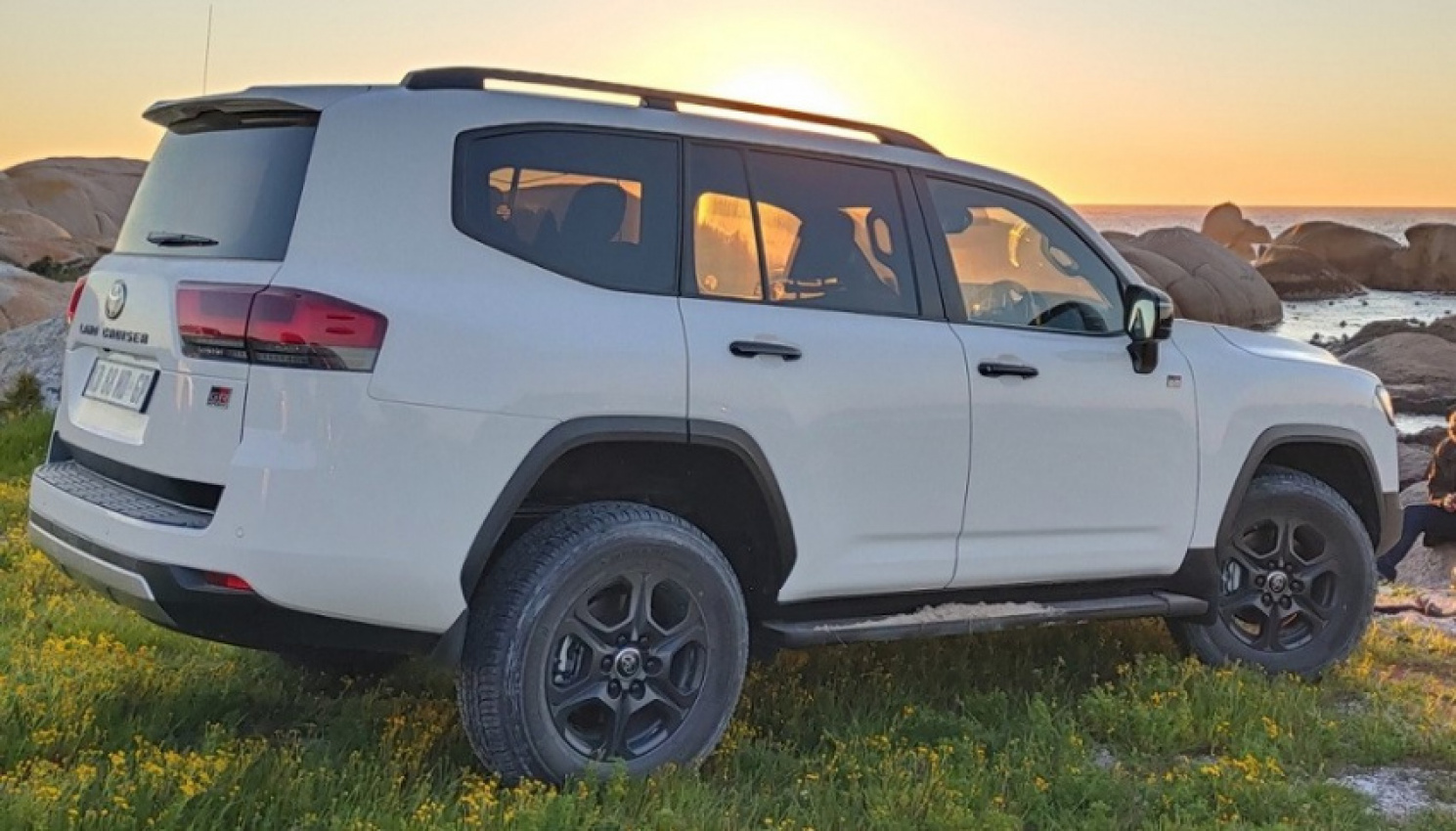 The last half of the trip was tackled again in the GR Sport diesel, which I was grateful for.

It’s undoubtedly the pick of the range for those who enjoy their large SUV to have some form of driving dynamics and good looks.

I liked the petrol engine, too, but the extra torque from the diesel is noticeable and pulls the heavy beast a whole lot better.

At cruising speed, the refinement of petrol versus diesel engines is imperceptible, however.

It took 14 years for the 200 series to be replaced, but the car that replaces it is undoubtedly a worthy successor.

It continues to deliver on the promise of not only being able to get its passengers to some far-flung corner of the planet, but also back again.

I also can’t help but feel that the competition with all their fancy electronics and large touch screens might not be able to do the same. 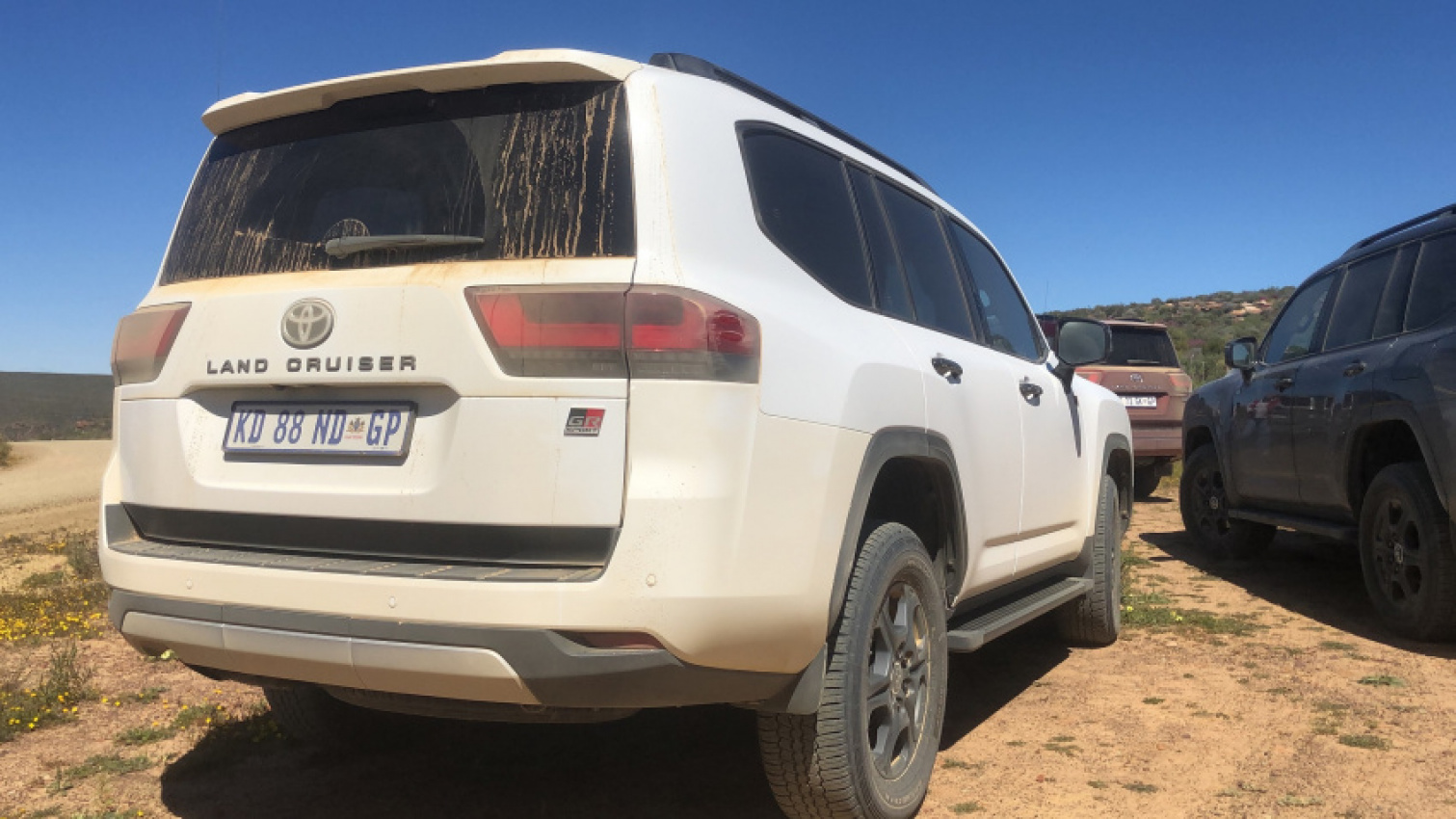 
View more: 3 Reasons to Buy the 2023 Toyota Tacoma Base Model

The people have spoken, and they have chosen Toyota RAV4 as the 2022 AA DRIVEN People’s Choice winner. With the list formed from the top 15 vehicles sold in New Zealand from January to October 2022, we form a semi-random ordered list and open the voting for the month of ...

A Toyota executive confirms that the company isn't closing its doors to the possibility.


View more: Toyota Land Cruiser's Return To The US Could Still Happen

U.S. News Says to Avoid the 2020 Toyota Land Cruiser But Should You?

If a '90s-Era Toyota Land Cruiser Isn't Nostalgic Enough, Flex Will Take It Back to the '80s

Is the Toyota Land Cruiser good for families? Here’s our verdict.