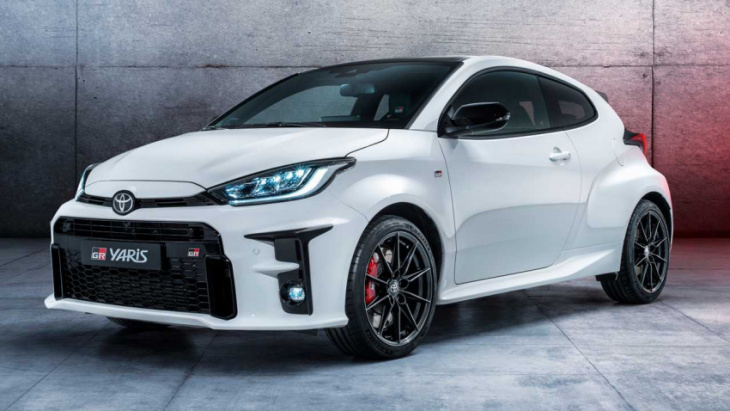 The Toyota GR Yaris is about to get even more exciting. Gazoo Racing chief engineer Naoyuki Sakamoto tells Autocar that the hot hatch is getting the higher-output engine from the GR Corolla Morizo Edition. There’s no info about when the model arrives.

The GR Yaris with the Morizo-spec engine has a slightly different output than the version in the US. This application of the turbocharged three-cylinder 1.6-liter powerplant has 296 horsepower (221 kilowatts) and 295 pound-feet (400 Newton-meters). The US-market variant has 300 hp (224 kW).

This version of the GR Yaris also gets the GR Corolla Morizo Edition’s six-speed manual with shorter gear ratios than the existing version of the transmission.

To make the most of the additional power, the new variant of the GR Yaris would lose its rear seats to reduce the vehicle’s weight. There would also be single-zone climate control, rather than the existing dual-zone layout.

Sakamoto tells Autocar that an automatic version of the GR Yaris is still under development. It’s an eight-speed automatic with a torque converter, rather than a dual-clutch layout. The gearbox has a manual mode, and the driver can shift through the gears using paddles behind the steering wheel.

The US doesn’t get GR Yaris, but the GR Corolla goes on sale there soon. The entry-level Core model starts at $36,995. The Circuit edition arrives later for $43,995 with upgrades like front and rear limited slip differentials and a carbon-fiber roof. Toyota plans to build 1,500 of them and offer this version for a single model year.

The Morizo Edtion is at the top of the range for $50,995. In addition to the extra torque, it loses weight by cutting out a bunch of rear amenities like the seats, speakers, window regulators, and window wiper. Toyota only plans to offer 200 of them for the first model year in the US.

For more discussion of the GR Corolla Morizo Edition, check out this episode of the Rambling About Cars podcast.


View more: The Toyota Highlander Hybrid Can Do Almost Anything The Sequoia Can—And Costs 1 Corolla Less

The AC cooling reduced and the car jerked on every upshift. BHPian t2k4 recently shared this with other enthusiasts. Got the DPF Full, visit dealer warning on my Fortuner 4×2 Diesel. The SUV has completed 7,700-odd KMs till date, has had the first service last month and got the ...


View more: DPF warning on my 2021 Fortuner & a below average service experience

The Aygo X is a city car, but that doesn't mean it's exempted from the grueling safety check.