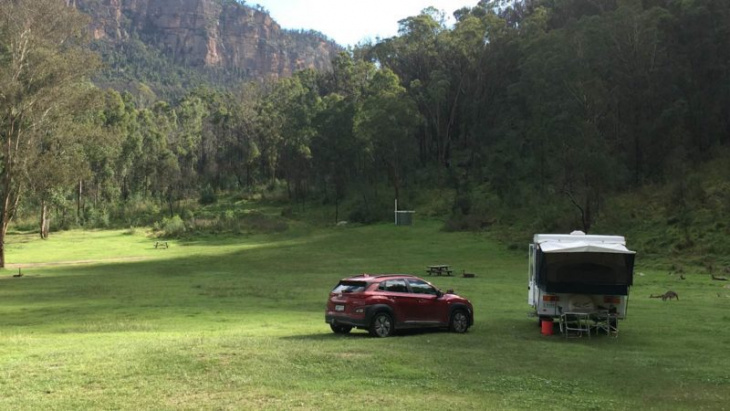 In an earlier article for The Driven I described how my wife and I came to be towing a light 2010 Jayco Flite windup camper trailer (769kg tare) with our 2019 Hyundai Kona electric car.

Although the Kona EV was not given a tow rating by Hyundai, many people do tow with it.

The owner’s manual just says “not recommended” in the towing section even though petrol versions have a tow rating of 1300kg. My article speculated on why Hyundai did not give the Kona EV a tow rating while relating that it tows very well subject to some sensible precautions.

Recently, another article discussed its authors’ reluctant decision to stop using their Kona to tow their camper trailer due to uncertainty about the legal status of doing so, despite several long and successful towing trips. Here, I describe a solution to that uncertainty.

Qualified inspectors known as “Recognised Engineering Signatories” (RES), who are listed by state and territory motor registries, can assess a modified vehicle and certify that it remains safe with an appropriate tow rating.

The role of inspectors

My Kona EV is only modified by the additions of an aftermarket tow bar designed for the petrol version of the Kona and an electronic trailer brake controller. 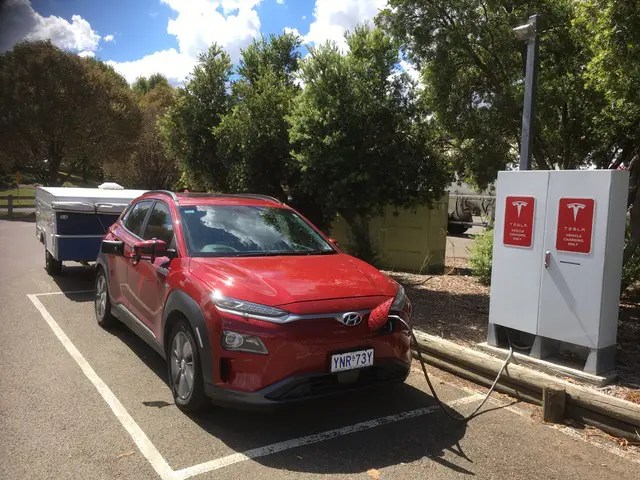 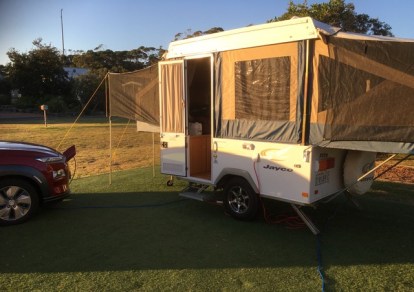 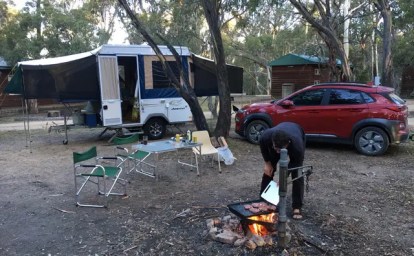 I engaged an RES in the ACT to inspect and test my car. Within the rules he could apply, he was able to give it a braked tow rating of 955 kg (255kg, unbraked), with a report and an updated sticker for the door jamb and an insert for the owner’s manual.

He is also authorized to approve custom tow bars under federal legislation and will submit a copy of his report to the relevant federal authority.

Paraphrasing some of his comments, he said that our vehicle:

Light commercial vehicles are often given a Gross Combination Mass (GCM), the maximum permitted total weight for the trailer plus the tow vehicle.

This can be substantially less than the sum of the tow rating and the Gross Vehicle Mass (GVM) because such vehicles can support a large payload or pull a heavy trailer but not both at the same time – the more you put on the trailer, the less you can put on the ute tray and vice-versa.

As explained here, light passenger vehicles often don’t have a GCM because they are not generally designed to carry much more than passengers and a moderate amount of luggage.

The question over tow ratings

Instead, they can tow up to their specified tow limit so long as other limits are also not exceeded, their GVM, tow ball weight and individual Permissible Axle Weight (PAW) ratings. In common with other Hyundai passenger vehicles, the petrol Kona has a GVM, PAW and tow ratings but no GCM.

In the absence of being specified, a GCM can be inferred from GVM and towing mass limits and an RES can use limits from another variant of the same vehicle for guidance.

So the electric’s tow ratings can be 955kg braked / 255kg unbraked, each 345kg less than the petrol Kona’s corresponding ratings. This keeps the combined masses at or below those of the petrol variant. 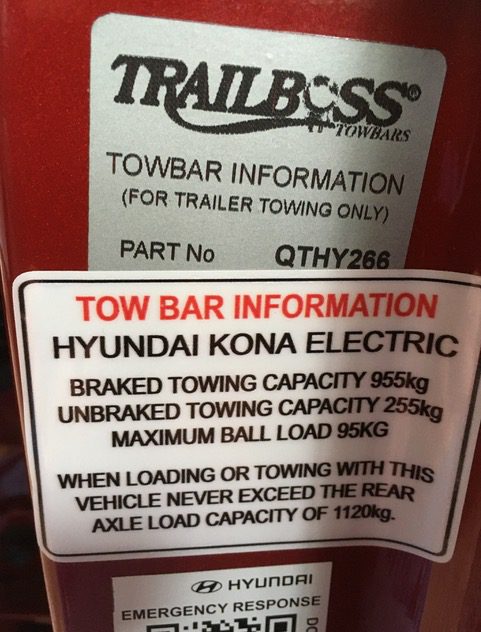 As noted previously, the tow ball weight, typically 8-10% of the trailer mass, counts towards the GVM and axle loading limits of the tow vehicle.

In the Kona, with a very short rear overhang, it is a fair approximation to say the tow ball weight would add straightforwardly to the mass on the rear axle.

The tow ball weight (95kg) of a trailer near the 955kg limit could be like having a 70kg person on the back seat with 25 kg of luggage. Care and attention are needed because it would be possible to exceed the rear PAW if some actual heavy rear passengers and luggage were combined with this tow ball load.

The importance of even weight distribution

So long as the ratings are not exceeded, the weight distribution between the front and rear axles should remain close to a perfect balance. We only tow our trailer with front seat occupants, moderate luggage and a trailer that is comfortably below the 955kg limit.

These days there are more EV towing options such as the Tesla Model Y, Hyundai Ioniq 5, Volvo/Polestar models and others with tow ratings around 1.5-1.6 tonnes.

There are also models from Tesla, BMW, Mercedes, Audi, Ford, Rivian etc with higher tow ratings. These are all larger, less efficient and/or more expensive vehicles than we want. We are usually not towing and we prefer the smaller, narrower, easier-to-park footprint of the cheaper Kona.

This varies by about a 10% for trips with a substantial increase or decrease of altitude. Towing reduces our range by about a third from over 400km to a bit under 300km, which remains quite manageable. Many of those larger tow vehicles use 22kWh/100km or more before you even add a trailer.

That inefficiency is mitigated to varying degrees by faster charging and larger battery capacities in the bigger vehicles but that doesn’t always overcome longer charging times.

When the charging speed limit is set by one of the common 50kW DC chargers, the vehicle that adds range most quickly is the one that is most efficient.

In the olden days, people were happy to tow modest, light-weight caravans and trailers with ordinary small cars and the Kona does an excellent job towing our camper trailer.

I hope to see a trend back to smarter, lighter, folding designs that minimize aerodynamic drag instead of McMansion caravans that require huge energy inputs, whether diesel or electric.

The custom tow ratings we have for our Kona EV are specific to our vehicle but they might serve as a model for others seeking to have their Konas rated for modest towing.

This might enable some to avoid retaining an ICE vehicle just for towing or purchasing a larger-than-necessary electric towing vehicle. It was not a cheap process to obtain the rating but subsequent ratings of the same vehicle should cost considerably less, at least for others using the same engineer.

The Avenger has arrived! Jeep's first pure electric SUV set to battle Hyundai Kona EV and BYD Atto 3, but will it come to Australia?

Charging into wildflower season in a Hyundai Kona