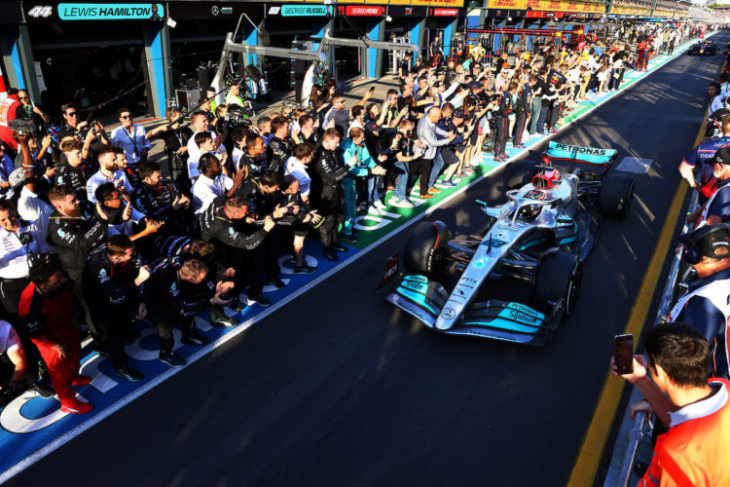 Mercedes team boss Toto Wolff expects the difficult 2022 season that Mercedes is enduring will benefit it for years going forward.

The Brackley-based squad won every Constructors’ Championship on offer from 2014 to 2021, and only missed out on one Drivers’ title in that time to Max Verstappen last year.

However, the new cars for 2022 saw Mercedes take a step backwards, and it has spent much of the opening half of the season attempting to understand its car.

Although it has taken a handful of podium results, it is still awaiting its first race victory this year, with Wolff describing its season so far as a “rollercoaster”.

“The start of the season wasn’t really any good, there is no other way of describing it,” Wolff said.

“If you win the championship in December and then four months on you’re not competing with the guys at the front, that’s frustrating.

“Since then we’ve had a rollercoaster, we’ve been on the podium almost every single race. We’re strong on the Sunday but never quite there in qualifying. The gap was simply too large.

“Now it’s about trying to understand what it is, and in the second half of the season, hopefully increase our qualifying pace and be able to race for victories.”

The team has slowly regained its form and has been more competitive at the last handful of races.

However, Wolff asserts that Mercedes’ aim is not to install short-term improvements, but rather to refine itself across multiple years.

“There’s not a lot that really went so well if you consider our expectations were to fight for the World Championship,” he said.

“But we need to take the positives, it’s what we’ve said in the past: ‘The days we lose are the days we learn the most’.

“Our car was really difficult, it didn’t improve at times, it really seemed it doesn’t improve. I think the learnings that we made will help us over many years.

“But also our time span is not a single weekend or even a single year. We’re looking at continuing to develop the organisation over two years, five years, 10 years.

“For this, maybe the learnings and the toughness of this year can be beneficial.”