Blomqvist put his Acura ARX on the GTP pole at the Roar Before the 24. 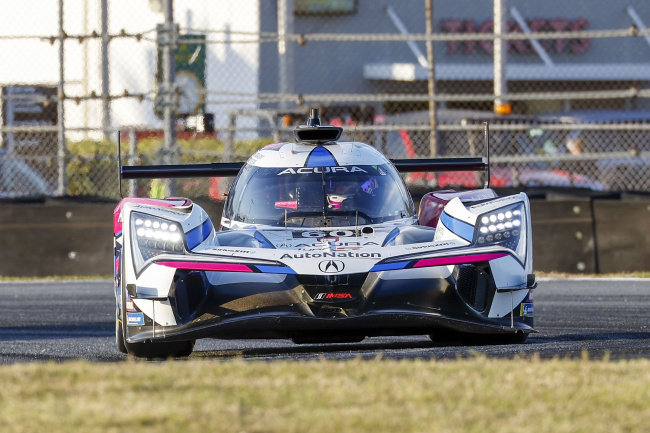 Is Tom Blomqvist the superstar driver that IMSA has been looking for in the new era of its extraordinary GTP cars?

Since joining Meyer Shank Racing with Curb Agajanian last year from the Formula E series, Blomqvist has co-driven to DPi victory in the Rolex 24 at Daytona; co-drove to the last DPi title with a stellar closing stint at the Petit Le Mans; and won the first GTP pole with scintillating last-lap heroics in his Acura ARX-06.

A Swede born in the U.K. and raised in New Zealand, the son of former world rally champion Stig Blomqvist has all the credentials and the experience at age 29 to stand out in IMSA new era of complex prototypes.

Nothing seems to catch the Swede off stride. He doesn’t exude confidence as much as owning it. 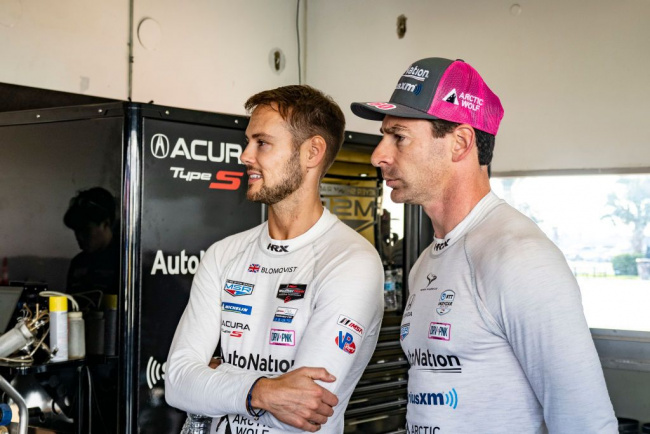 Thomas Blomqvist, left, and Simon Pagenaud hope to put Meyer Shank Racing w/Curb Agajanian on the podium in this year’s Rolex 24 at Daytona.

Blomqvist won the pole in his Acura ARX-06 on the strength of a decision by Meyer Shank to have him scrub in a set of Michelins, put on a fresh set and take on a last-minute flyer at the peak time of rubber build-up on the Daytona track.

“It was a lick the stamp and send it kind of thing,” said Blomqvist, who had only his “scrub in laps” to guide him before edging Felipe Nasr in the Porsche Penske Motorsports Porsche 963 by 0.083 seconds. “It might be hereditary, but some things don’t phase me,” he said. Absent a red flag that shortened the session, Blomqvist might have broken the track record despite the hybrids being heavier than the preceding DPis.

Team owner Mike Shank has a wealth of experience and knows he has a game-changer in Blomqvist.

“To have one lap to do it—we thought we were screwed when the red flag came out,” Shank said of Blomqvist’s qualifying. “He’s a rock star. We love having him on board.”

Now paired with American Colin Braun, it might be the perfect duo for a sanctioning body that needs to have standout driving stars to complement its stellar new hybrid prototypes. Working for a home-grown team owner in Shank, who came up through the Grand-Am and WeatherTech Championship series before joining IndyCar and winning the Indy 500, is a plus for IMSA fans.

Given Blomqvist’s Formula E experience, the timing could not be better. The GTPs are complicated by choices on how to use the electric power and braking that gathers the regenerative energy. While acknowledging his team’s role in setting up a balanced chassis for him, the Swede has had no problem adapting to the hybrids and deserves some of the credit for car set-up. Braun said his co-driver’s experience in Formula E “is a huge boost for us.”

“It reacts to changes,” said Blomqvist of the No. 60 ARX-06. “It doesn’t do anything weird. You don’t have to do some super unconventional style. It does what you want it to do.”

The duo of Blomqvist and Braun on the team of Shank are reminiscent of the first GTP era when Aussie Geoff Brabham, son of three-time F1 champion Jack Brabham, and American Chip Robinson ruled the roost in the prototypes of Nissan Performance Technology, the team launched by IMSA’s Don Devendorf and John Knepp as Electramotive Engineering.

Brabham won four straight driving titles in a highly competitive era between 1988 and 1991, so there’s a way to go for Blomqvist. And, he obviously has a path to IndyCar with Shank. But he’s off to a stellar start in IMSA.

Keyword: Tom Blomqvist Is 'Rock Star' That IMSA Needs to Shine at the Rolex 24 at Daytona