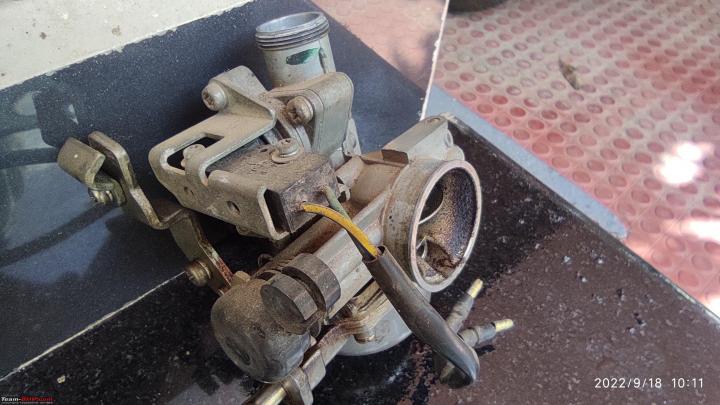 My 1987 Honda CD 100 has a similar carburettor but it does not have this tactile switch.

BHPian 9216 recently shared this with other enthusiasts.

I have a 2014 Activa i. In its carburettor, there is a tactile switch which gets activated when the throttle is opened.

The switch is screwed onto the throttle body and the only interaction is through a small button-like projection in the throttle chamber. When the throttle is opened a little from the idle position, the upward movement of the valve activates the switch.

A very similar carburettor is in my 1987 CD 100, but it doesn’t have the switch. Can somebody explain its purpose, please?

Here’s what BHPian shancz had to say about the matter:

Do you have those economy-power mode indicators on your instrument panel?

If yes, then could be that but it’s just a wild guess.

Here’s what BHPian anay3000 had to say about the matter:

If not an auto-choke, then it’s a fuel valve. An additional pic from the other side would have helped.

Here’s what BHPian SS-Traveller had to say about the matter:

Looks like a fuel shut-off valve. Shuts off fuel supply from the float chamber to the main jet when the ignition is off, to prevent engine flooding and / or backfiring.

Keyword: Throttle actuated switch in Honda Activa's carburettor: What is it for