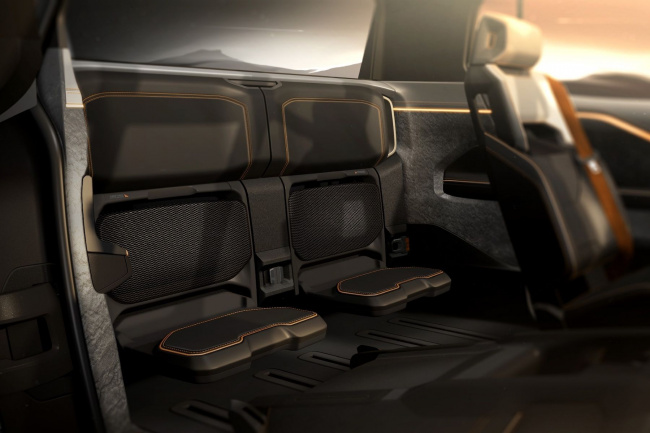 Ram’s all-electric Revolution pickup was the darling of CES in Vegas earlier this month, charting a plan for what the brand’s first EV truck could look like. Numerous innovations were described at its launch, including removable tablets; and the ability to open its cargo area straight from tailgate to frunk. Also mentioned, but not shown in detail, was a third-row seating arrangement.

That changed yesterday when Ram released a handful of images of the Way Back accommodations. The photos confirm the perches are jump seats, ones which are mounted to the truck’s folding midgate and can be deployed in a series of different manners. When stored flush against the wall, they don’t seem to protrude into the cabin more than a few inches, beating the tar out of jump seats from the Bad Old Days (see: Exhibit A, old-school Ford Ranger seats). 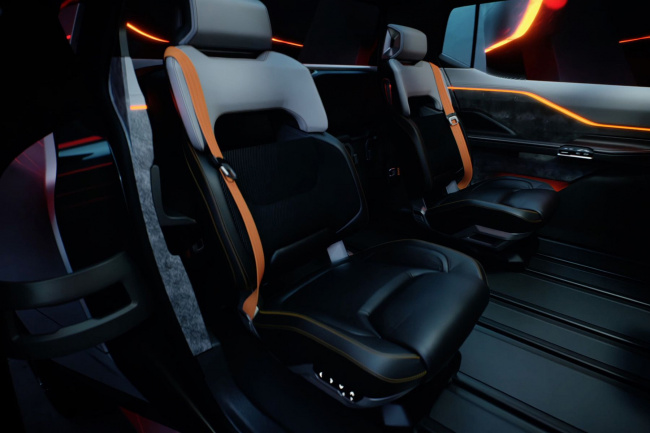 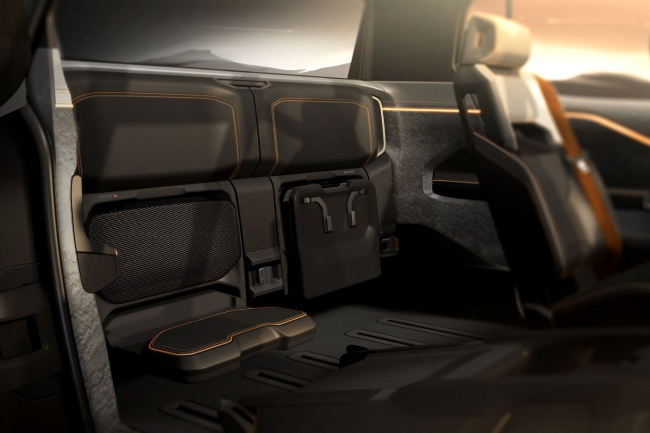 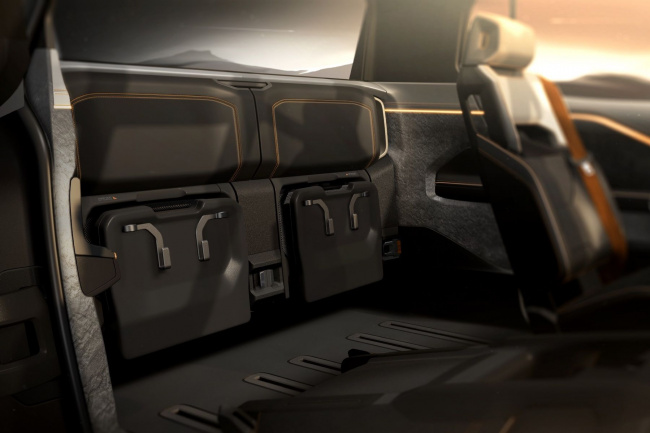 Hinged at the bottom, the chairs unfold from the midgate like an oven door, providing space for either very small humans or people you don’t like very much. Worth noting is the Ram Revolution’s innovative rail system, which permits the middle row captain’s chairs to slide back and forth like an – ahem – minivan, a vehicle which has had three rows of seats since approximately the dawn of time, and certainly long before Joe Q. Public decided a full-size truck was needed for popping to the shops for a litre of milk.

We’ll remind all hands this truck is firmly in the concept stage, which means we may see all, some, or none of these features when the all-electric Ram actually goes on sale. Still, with wide swaths of consumers using this type of truck for hauling their family instead of mulch, a third row could quickly become the new Crew Cab — a feature which attracts new customers whilst further driving pickups away from their workhorse roots.

After all, if one truck-maker introduces a feature which becomes incredibly popular (and profitable), you can bet your bottom U-joint the others won’t be far behind.

We’ll have the opportunity to ask some of these questions during Episode 1 of The Truck Guy podcast, when we will be joined by Chris Benjamin and Lou Gasevski, designers at Stellantis who worked on the interior and exterior design of this truck, respectively. Look for that episode February 1, available here on this site and wherever you download your favourite podcasts.

All-terrain capability and a top speed of 70 miles per hour sounds like a perfect recipe for a fun time.

Medium In the midst of the Great Recession, and despite working through Chapter 11 bankruptcy, Chrysler pushed through the release of its redesigned half-tons, followed by its HD Rams for the ’10 model year. Despite the severity of the situation, and the subsequent reorganization of the automaker, it proved a ...

Many youngsters have taken up content creation as a mainstream job. In order to establish themselves as social media influencers, they often try to create content like videos that can go viral on the internet. One such video made by an Instagram influencer girl has landed her in trouble. People ...

The million-dollar question is: Does Ram plan to sell it in the US?

Ram 1500 Revolution concept Who: The American pickup truck giant What: It’s first all-electric ute When: 2024 Why: Because not even utes can escape the EV revolution If you’re still in any doubt the automotive world is racing towards an electric future this should fix that – meet the ...