News of the return of Acura’s Integra nameplate nearly broke the internet this year. After almost 20 years away, the resurrected Integra is replacing the ILX. Retaining the attributes of the original model, it shares a platform with the Honda Civic but is more distinctive and feels more premium with options like the ELS 3D surround sound stereo. The 2023 Acura Integra competes with cars like the Audi A3 and Mercedes-Benz CLA. It also competes with the BMW 2 Series Grand Coupe, which it has three advantages over.

1. The base 2023 Acura Integra has a lower starting price

Compared to the other premium entry-level sedans, the 2023 Acura Integra is a bargain. It’s closer to the Volkswagen Golf GTI in price and offers the same level of playfulness. The Audi A3 starts at around $35K, and the Mercedes-Benz CLA-Class starts at $38K.

BMW’s M cars share a pedigree of high performance with a lineage going back 40 years to the M1 supercar. The cars are known for powerful engines, razor-sharp handling, and a “take no prisoners” attitude toward track days. However, when you put the M badge on anything BMW, it significantly increases the price. The 2 Series is not immune to this price increase because the M235i starts at $46,495.

Acura’s A-Spec may lack some of the BMW M’s pedigree, but it’s no poser. Getting the A-Spec package on the 2023 Acura Integra will only set you back another $2,000. Add the Technology package and the MSRP only goes to $35,800.

More importantly, you get noticeable improvements for checking the A-Spec and Technology package boxes. The adaptive, sports-tuned suspension and variable-ratio steering quicken the Integra’s reflexes.

For those who want a third pedal, you can order a real manual transmission. Honda makes some of the best shifting manual transmissions in the business. The six-speed provides smooth, precise shifting and matches revs on downshifts. It’s the best way to make the most of the 200-horsepower 1.5-liter turbo four-cylinder.

3. The Acura Integra offers a premium dose of nostalgia

Nostalgia has an increasingly powerful pull as you get older. Just ask anyone with a classic hot rod or muscle car safely tucked in their garage. The original Integra has become the Gen-X and Millenial equivalent to a Tri-Five Chevy or ‘60s Mustang. 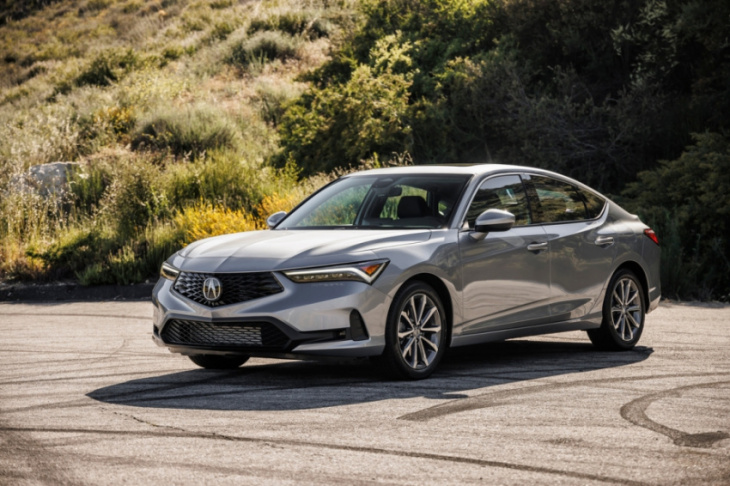 If you came of age in the 1990s, you know that there was a time between “Reality Bites” and “The Fast and the Furious” movies where the Acura Integra was a fun, obtainable performance car. It was practical, inexpensive with good gas mileage, and it had enough space to move all of your stuff into your first real apartment.

The new Integra is undeniably nostalgic because it’s still that same car. As mentioned by Kelley Blue Book, the nameplate “shares its spirit with the ones you remember fondly.” It’s a little bigger and heavier but still just as entertaining. The BMW 2 Series Grand Coupe is also fun and shares many of the attributes of the Integra. But it lacks nostalgia.

Even before it arrived it was announcing its presence — the 2024 Acura Integra Type S, which is a prototype at this point, is the loudest Honda yet, and it is so in a proud manner that speaks to its underlying potential. Driving the high-banked oval at Honda’s Tochigi proving grounds ...

With the recent launch of the revived Acura Integra, it seemed like it was only a matter of time before the Integra Type S would also debut. Now we know when to expect it: Summer 2023, arriving for the 2024 model year. The high-performance Integra Type S is to ...

With only a brief session in a prototype, we can't draw final conclusions. But the 2024 Acura Integra Type S feels like it has that special Civic Type R magic.

Acura has shared the first info on the new Type S version of the Integra. This high-performance variant features the same components as the Honda Civic Type R: a 300-plus-hp turbocharged 2.0-liter inline-four, a six-speed manual transmission, front-wheel drive, and a limited-slip differential. The 2024 Integra Type S will ...

What’s the best way for Acura to improve upon its new Integra? Give it more power, better tires, and an upgraded chassis. So we’re pleased that the Integra’s upcoming performance variant, the Type S, takes its powertrain from the delightful new Honda Civic Type R and includes numerous handling upgrades. ...


View more: 2024 Acura Integra Type S Is More Like What We Were Hoping For