Thomas Ulbrich to take over ‘New Mobility’ department at VW 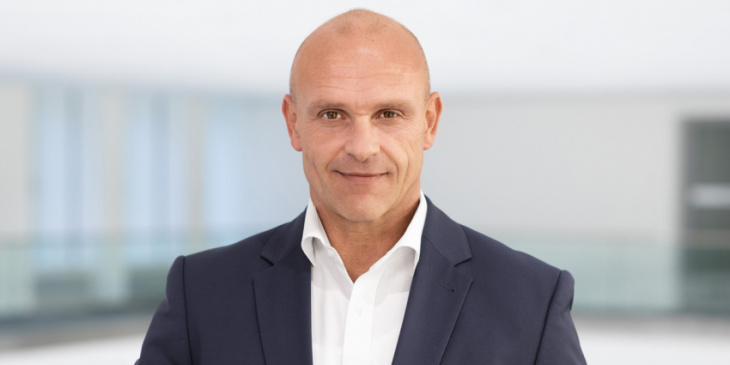 The core brand VW Passenger Cars is reorganising its board departments. According to media reports, the future fields of electromobility and digitalisation are to be combined in the ‘New Mobility’ department – under the leadership of the current board member for development, Thomas Ulbrich.

The German publication Handelsblatt reported on the plans. In his new function, Ulbrich is to take care of both the ID. models and the Trinity project, which is important for VW as a technical flagship. In addition, as the new board member for “New Mobility”, Ulbrich is to ensure close cooperation between the Cariad software division and the development division of the VW passenger car brand, according to the report. Technical Development”, or “TE” for short in Wolfsburg, is to be headed by Kai Grünitz as the board member after Thomas Ulbrich’s change.

The Handelsblatt refers to information from company circles. Volkswagen itself did not want to comment on the report. In addition to the personnel reshuffle in the VW brand board of management as of 1 October, Ulbrich is also to join the supervisory board of Cariad.

In other words, Ulbrich will relinquish responsibility for overall development, including the combustion engine and hybrid models, and concentrate – once again – on the brand’s electric models. Ulbrich was previously VW brand board member for electric mobility, which at the time referred to the development of the first ID. models and their production in Zwickau. When the board came to the conclusion that electromobility was the “new normal”, the special board department was eliminated and integrated into the existing structures for development and production.

Ulbrich, as a recognised eMobility specialist, was to move to China to head Volkswagen Anhui, the joint venture with JAC, according to earlier reports. As it would have been a step backwards in the group hierarchy, Ulbrich reportedly declined, and his departure from the group had already been announced by VW. But then the board of directors and the supervisory board apparently came to an understanding: In January 2021, VW announced that Ulbrich would stay – and become the brand’s chief development officer. ‘New Mobility’ will be the fourth board department that Ulbrich has headed at VW since 2014.

The fact that Ulbrich is now relinquishing responsibility for overall development is not seen as a step backwards, however, but as a vote of confidence, according to the Handelsblatt: Ulbrich, who already saved the more than bumpy start of the ID.3 production, is trusted to steer the future projects, which are so important for the group, in the right direction. Ulbrich has earned a “reputation as a troubleshooter” at Volkswagen, says the business newspaper. “Wherever there are problems, wherever production hangs, wherever the software is again not ready on time – that’s where the 56-year-old car manager steps in,” the article says.

There seems to be enough work. For example, the problems with the Cariad software unit have taken on greater proportions than was known for a long time – even model launches such as the electric Porsche Macan are said to have been postponed due to a lack of finished software. With the development of the unit cell, the comprehensive SSP electric platform and digitalisation including autonomous driving functions, further complex projects are in the pipeline.

These tasks are not only Ulbrich’s responsibility, the engineers of the classic development department are also involved – therefore Ulbrich and his successor Grünitz will cooperate. The two managers will also move into neighbouring offices in TE, according to the report. Grünitz is well acquainted with the MEB: he has been head of development at VW Commercial Vehicles and was responsible there, among other things, for the development of the ID. Buzz.

The report does not say how large the ‘New Mobility’ division will be. It is likely to involve not only development engineers, but an interdisciplinary team that brings together areas such as battery and software, but also development, production, purchasing and controlling.

BMW plans electric sedan and SUV for the ‘Neue Klasse’

Mini rumoured to be considering cooperation with Canoo

BMW introduces entry-level i4 eDrive35 in the USA

Rivian to cut 6% of workforce

Refactory Flins: Renault skills up for the circular economy

Hyundai has selected the iDM146 integrated drive module from BorgWarner to power another electric model in the A-segment. The start of production is planned for the third quarter of 2024. This is the Korean manufacturer’s second order for the iDM146. Hyundai Motor Group had already ordered said electric drive ...

Xpeng is now accepting reservations for its fourth model, the G9, in its home country. In connection with the pre-sales launch in China, Xpeng also gives more technical details of the model, which was also designed for international markets from the very beginning. The G9 – or more precisely, ...

MG Motor opens for pre-orders of the MG4

Pre-orders for the MG4 Electric are now open across Europe. According to the manufacturer, the first 1,000 reservations of the MG4 Electric that lead to binding purchases are guaranteed to be delivered before the end of 2022. At the end of June, the SAIC brand gave more details about ...


View more: MG Motor opens for pre-orders of the MG4

According to industry insiders, BYD has started supplying LFP cells to Tesla – specifically to the plant in Germany. The first batch of Tesla Model Ys equipped with BYD’s ‘Blade’ batteries are expected to roll off the assembly line in Grünheide in a month at the earliest. For the ...


View more: Tesla to use BYD batteries in German gigafactory

Volkswagen to introduce the ID. 3, 4 and 5 range in Australia

Volkswagen Australia is preparing to introduce a range of new electric cars, according to a report from Drive. The ID.4 and ID.5 will be introduced in Australia at the end of next year, followed by the ID.3 in 2024. After Volkswagen recently launched production of the ID.4 in the ...


View more: Volkswagen to introduce the ID. 3, 4 and 5 range in Australia

Mercedes-Benz has released the SUV offshoot of the all-electric EQS for sale, with prices in Germany starting at €110,658. The EQS SUV can now be ordered in three drive variants, and the first vehicles are expected to reach European customers this December. As announced at the model’s launch, the ...

Tata plans to take over Ford factory in India

Aiways is releasing the U6 in China with 3 battery options

Tesla is planning another factory in the USA

BYD is expanding to Israel

Elon Musk now holds only 15 per cent of Tesla

Skoda updates the Enyaq iV in the UK

Quantum Solutions starts production of the FOMM ONE EV in Thailand

Volkswagen kicks off production of the ID.4 in the USA

Sono Motors presents the final series design of the Sion

BYD plans to hit the Japanese market with 3 BEVs

Porsche updates the software across all Taycan models

Volkswagen is reorganizing management in the USA

Porsche confirms launch delay of the Macan until 2024

Chevrolet presents the serial version of the Blazer EV

Genesis reveals prices and specs for the GV70

Mercedes rumoured to drop the EQC in 2023