This Wild Mustang Prototype Is a Test Bed For Ford's 7.3-Liter Crate Engine

A funky intake arm is the reason for that massive bulge. 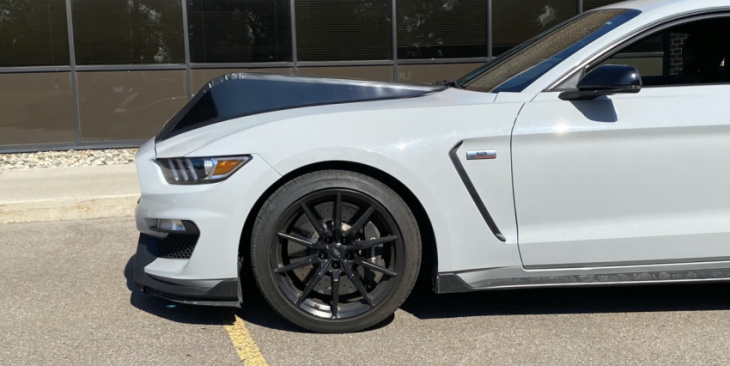 Back in March 2022, a flurry of spy shots came out of Detroit showing a peculiar Ford Mustang Shelby GT350 prototype sporting an absolutely ridiculous hood bulge. Opinions were mixed as to what might be hiding under the hood, but now, thanks to a new video, we know.

Revan Evan on YouTube got the chance to spend some up-close-and-personal time with the GT350 mule alongside a handful of Ford engineers, getting a chance to peek under that epic hood structure. Underneath? None other than Ford’s 7.3-liter naturally aspirated “Godzilla” V-8.

The Godzilla motor is available in the Ford Super Duty and comes offered as a crate motor for those looking to do their own builds. Unfortunately, this mule isn’t a prototype for a new Mustang trim. Instead, it’s a testbed for Ford’s upcoming 7.3-liter V-8 and manual transmission combo package. As The Drive points out, the company already offers this package with an automatic transmission.

The engineers explain that because this drivetrain runs on its own standalone ECU, it could be dropped into anything, from a Fifties pickup to a brand-new Mustang. The development crew picked this Shelby GT350 to use as a tester simply because they had it sitting around.

The reason for that massive bulge? Well, the prototype engine has an intake that points to the sky, so engineers needed to fit a manifold that wouldn’t clear the hood shut lines. The production manifold will come with a straight-line entrance, making clearance issues a thing of the past.

The more you know.

Ford’s new Mustang features a tricked-out drift brake feature for easier slides, but it might not come to Australia. Australia could miss out on one of the headline items of the new, seventh-generation Mustang – the Electronic Drift Brake. The new pony car was revealed in Detroit in September ...

The Ford F-150 struggles with shortages Where do Ford badges come from? How long is the wait for a Ford F-150? The fact that thousands of Ford F-150 models are delayed isn’t exactly new information. The incomplete models can be seen from space, so even astronauts are in the ...

Ford has filed a patent application for an external airbag that would deploy from behind a vehicle’s grille during collisions. Filed with the United States Patent and Trademark Office (USPTO) on Mar. 1, 2021, and published Sept. 1, the application describes an airbag system similar to the ones already ...

The service bill for the 7th service came to Rs. 10,514. BHPian A.G. recently shared this with other enthusiasts. Eighth and Ninth Service Experience: Quite late in sharing the same but trying to bring it upto speed. The eighth service of 70,000 Kms was done in June 2021. The ...

This next-generation Ford Ranger has big shoes to fill. It’s hard to believe, but the previous Ranger was first launched in 2012 meaning it served a whole decade in the market. Despite that, it never felt long in the tooth—a testament to its then designers and engineers who set ...

Sales figures for 2022 show GM in the lead GM’s trucks got a refresh for 2022, and that helps sales GMC also added an ultimate luxury version version in the Sierra Denali Ultimate Ford recently update the F-150, too Ford loves to tout that for 45 years the Ford ...