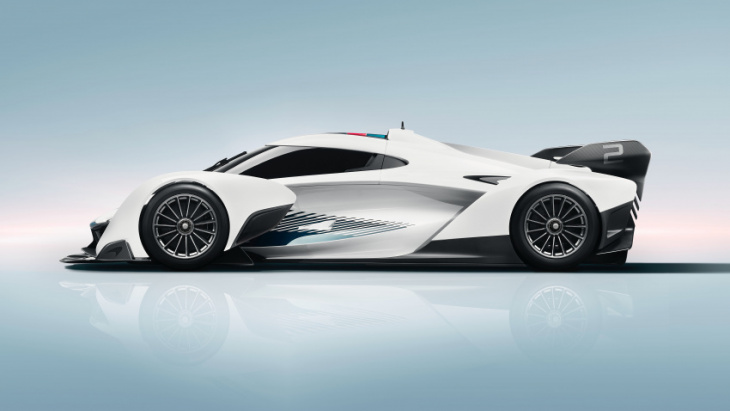 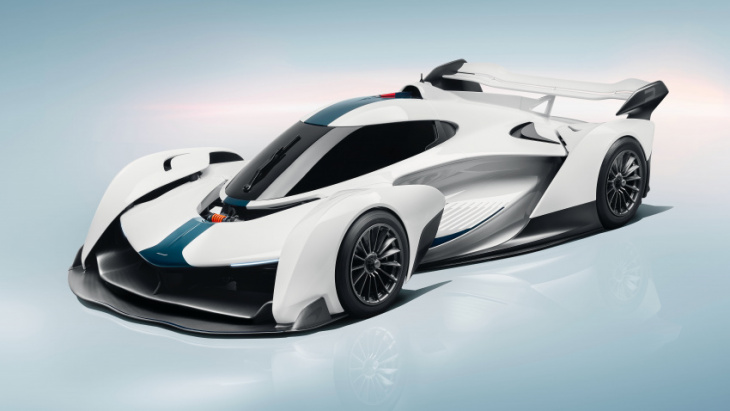 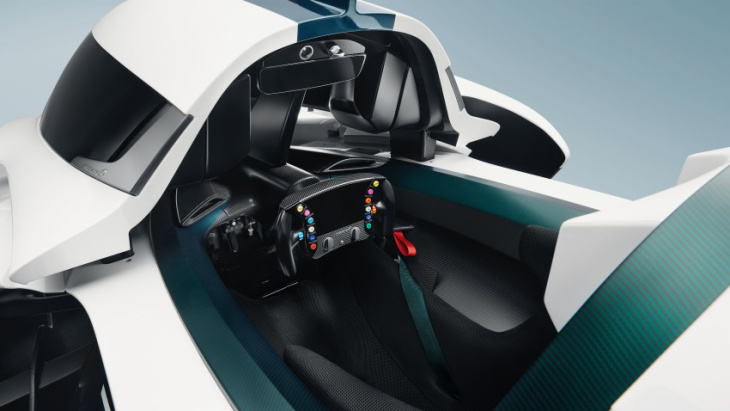 Five years ago, about the time Mercedes and Aston Martin were midway through development of their track-focused hypercars, McLaren designed a no-limits Vision racer for Gran Turismo. It had well over 1,100 horsepower from a hybridised twin turbo V8 with an electric motor for each front wheel. It also had a lie-on-your-tummy driving position. But we’ve seen these Vision GT cars before. Bar the occasional full scale model or rough running prototype, they never go anywhere.

Until now. Because this is the Solus GT. The first VGT car to become a reality. McLaren will be building 25 of them, priced at over £2.5 million each. Considerably more than the million credits they cost in the game. And it doesn’t even have the sunny-side-down driving position.

And that’s not all that hasn’t made the leap to real life. The familiar twin turbo V8 has been ditched. In favour of a naturally aspirated V10 that revs past 10,000rpm and develops 840bhp. This is good news, even if it’s not boosted by an electric motor for each front wheel.

Visually, McLaren has been faithful to the game car, but technically what you’re looking at here is more aligned with a Le Mans prototype. The 5.2-litre engine (it’ll need to be pre-warmed for an hour before driving) is used in different configurations for LMP2, and the Solus GT’s architecture is pure racer. The engine is a stressed member, the suspension is mounted off the seven-speed sequential gearbox, which is operated via a multi-plate carbon clutch and features straight cut gears.

Obviously it’s not road legal. But outside of F1 it will be the fastest McLaren ever around a track, quicker than a 720S GT3X, Senna GTR or P1 GTR. Unlike them it doesn’t use the familiar road car carbon tub, but a bespoke monocoque created especially for the project. All up it weighs well under 1,000kg and develops 1,200kg of downforce. There’s no active aero, just a socking great wing, front splitter and huge underbody tunnels.

The fighter jet-style canopy slides forward to access the cabin, which features a button-laden steering wheel and almost nothing else. There’s a halo-style central spar, and head protection to either side. The seat is fixed, the pedals slide, a full fit is obviously part of the package. Top Gear has had exclusive early access to the car – you’ll see more on that soon – and can confirm the full surround view makes it amazing to sit in, and the noise from the nat asp V10… it’s just wild.

0-62mph is estimated at 2.5secs and top speed over 200mph. No word on lap times yet, but it should give a Valkyrie a run for its money. In more ways than one. Deliveries of finished cars are due next spring.

Mac's the Life : McLaren's Fantastic Beasts and Where To Find Them

McLaren Is Still In Financial Trouble

The eye-watering wages for Ferrari, McLaren and Sauber’s new F1 bosses - but which team principal earns the most?

McLaren Applied and Elaphe Propulsion Technologies have paired up to offer a highly responsive, in-wheel-motor EV system said to enhance packaging, efficiency and driving dynamics. McLaren Applied, the engineering and technology arm of British automaker McLaren, takes its lessons from motorsport and automotive endeavours and applies them to various industries. ...

McLaren has nixed its 720S, paving the way for an imminent successor

It’s official: the McLaren 720S has been discontinued, with new customers now being informed they cannot order the car any more. The end of the production run concludes arguably one of the most exciting chapters of the supercar story of the modern era. jQuery(function(){ if (typeof jwplayer_load == typeof ...


View more: McLaren has nixed its 720S, paving the way for an imminent successor

As though the McLaren 765 LT is not powerful enough, Novitec has given it even more of the stuff

A new drop of the APL McLaren HySpeed for 2023 sees three new striking colourways for the McLaren collab.

McLaren's Elva gets a windscreen version

McLaren unveils its most venomous spider - the 765LT

TGSA sits down with the design director of McLaren Automotive, Rob Melville

Norris took F1 performance to ‘another level’ in 2022 – Palmer

The new Mclaren Artura – a step into the future

Will Lando Norris be the driver to end Max Verstappen’s F1 reign? McLaren aiming to be title contenders by 2025

The McLaren 720S is dead. So what comes next?

Following a five-year run, the Mclaren 720s bows out of the game

McLaren SUV Officially Under Consideration, But It Will Take Time

McLaren: A lot more to come from Norris

Even without Alfa Romeo reliability issues, McLaren/Alpine ‘step ahead’