This Austin Healey Restomod Will Cost You Nearly $500,000

Caton's Healey redux is a beautiful, but expensive, thing. 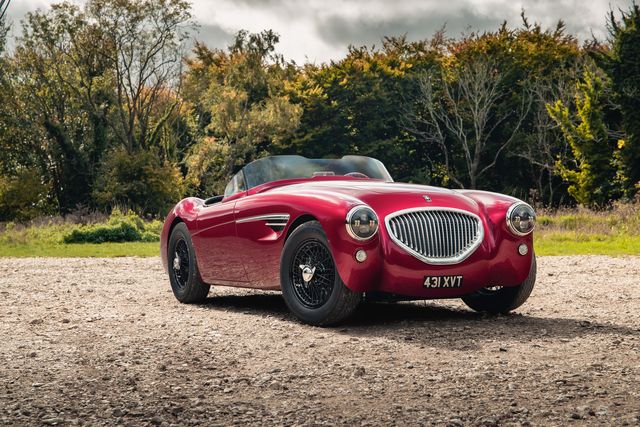 It’s tough to find a restomod that isn’t a Porsche these days. The 911 has been around since what seems like the dawn of time and there are over a million of the things kicking around, so it’s no surprise that so many are drawn to a shinier, freshened up take on Ferdinand’s dream. There are people out there that don’t get excited about a refreshed Porsche, though. For example, the UK’s Caton has decided to go back to the Fifties and give the Austin Healey the restomod treatment.

Taking an original Healey 100/4 BN1 as its base, Caton’s engineers haven’t simply slapped on some shiny new bits and called it a day. There’s a new pedal box and a restyled rear so tall people can comfortably fit, the front’s been given a fresh look with new headlights and a shiny new grille. New bumpers sit on either end, the seams have been removed from the whole thing, the boot hinges are gone, and the interior is tastefully updated. The paintwork is a definite highlight, as every part of the process, says Caton, is as bespoke as they come, including the paint. It’s pretty much flawless. A wonderful thing to have, but every (inevitable) stone chip will likely feel like losing a finger. There is no option of a roof either. 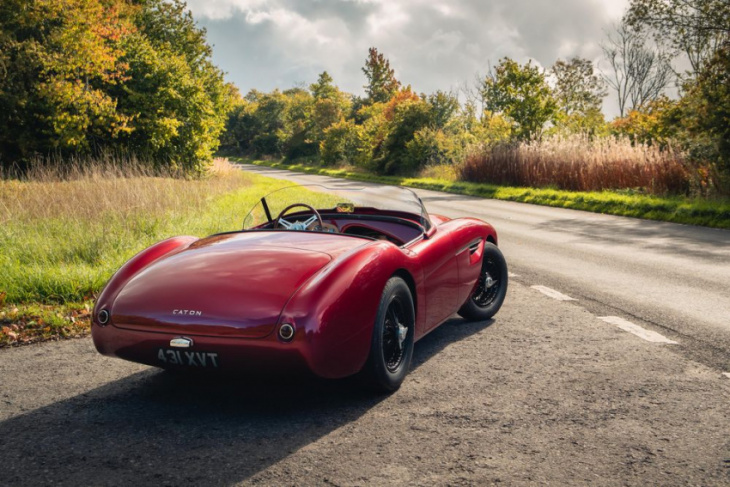 The interior refit is particularly interesting. Obviously it’s been covered in very fine, luxurious leather, presumably from cows that repel any form of dirt or pointy things, but it’s remarkably simple. A new instrument cluster sits behind a smallish steering wheel, and there’s a USB slot in a tray mounted on the transmission tunnel. That’s about it. Caton even went so far as to remove the indicator stalk, building blinkers into a rocker switch that sits in the ‘wheel hub. Everything else, including starting the thing, is done with a button.

Of course, the changes aren’t just cosmetic. A fresh chassis addresses the original’s weak points, and a five-speed stick replaces the original’s three speed. The biggest change here is the car’s 3.0-liter four cylinder motor. Caton contracted JME Healeys, one of the best in the business, to give the engine a tune up. While the motor is based on the original block, pretty much everything’s been played with. It has a ported head, steel crank, high compression pistons, twin SU carbs, a delightfully lumpy competition camshaft, and more. The result is 185bhp and 195lb ft, more than double the original car’s grunt. Seeing as it weighs just 2028lbs, that power is more than adequate. JME left the suspension as is, though did change dampers for a smoother ride. 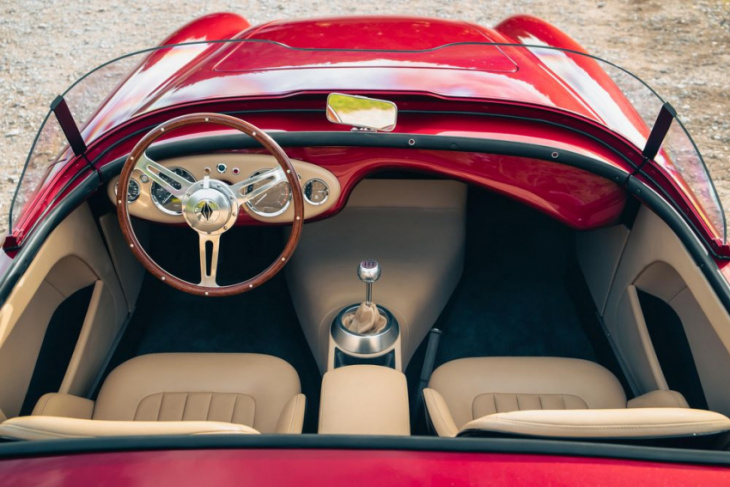 All this sounds promising. The Healey itself is a difficult car to dislike. It has a happy little face and a body that evokes images of tearing through a leafy countryside to have a picnic of cucumber sandwiches and ginger beer. As ever with these things there’s a catch: It is colossally expensive. It’s the thick end of £500,000 in the UK, which, depending on how badly the government is messing the country up, could mean it’ll set US customers back $200,000, $700,000, or any number you care to pick out of your backside.

On start up the 3.0-liter motor bursts into gloriously chunky life. The car shakes from side to side, noise fires itself out of a sidepipe conveniently located next to your ear, and you’re transported to a time when silent start ups were reserved for bicycles only. It’s throaty, and puts a big smile on your face. The new five-speed stick is easy to use, the clutch isn’t heavy, and setting off is a dream. Once you’re moving, the gear change is particularly satisfying. There’s a short, chunky shift action, one that feels suitably sporting for a car like this. 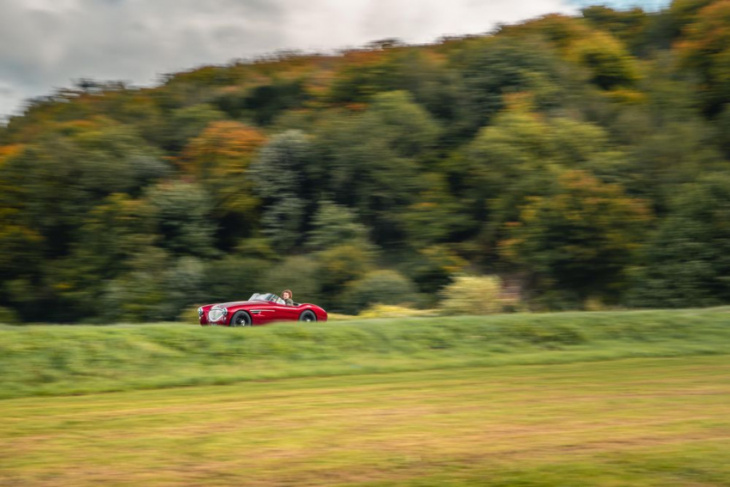 It takes a while to build the confidence to push. Its engine may be refreshed, but shooting up the rev range creates such an almighty noise that it feels almost like you’re hurting it. You’re not, as the higher you go the better it feels. Wind rushes over the beautifully sculpted fly screen, mixing with the engine noise, settling you into a warm rush of nostalgia. Seeing as it weighs next to nothing, the turn of pace on offer is really quite something. You’re not treated to an urgent rush, but more a smooth curve of grunt that doesn’t seem to end.

Its brakes are an interesting experience – you have to be committed. If you’re too gentle with the pedal the Caton can get a little wayward, especially on uneven asphalt, but nail ‘em and it’ll stop straight and true. It’s a classic car, expect it to behave like one. The same goes for the steering – there’s a bit of play in the wheel before you feel it doing anything, and it’s pretty light. You get a good idea of what’s going on, but don’t expect Lotus-esque feedback. Hooking it in to a corner with the throttle balanced, and the steering flowing is a truly (if we’re going to use era-appropriate parlance) thrilling experience. 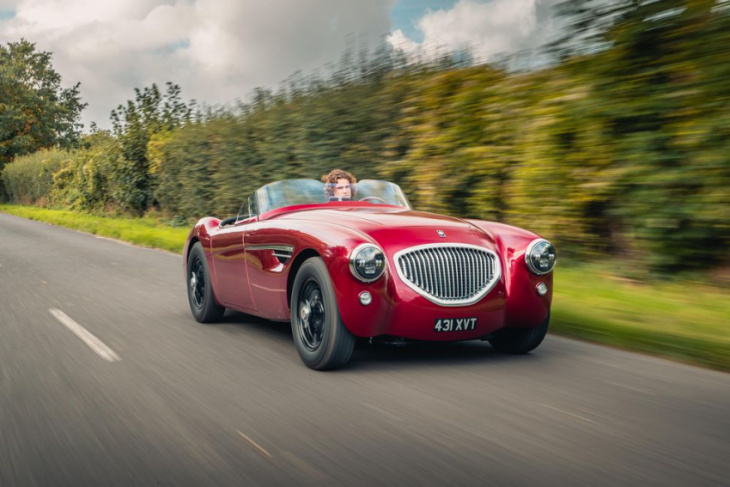 Add all those elements together and you’ve got an engaging, not easy, car to drive. Your wits need to be about you, and you need to know where your feet and hands are at any given moment. It’s impossible to be lazy in the Caton, and that’s a wonderful thing. There are flaws you have to work around, and an engine that makes you want to press on.

We do have to loop back to the money. Caton will only build 25 of these, all by hand, and all to their clients’ spec. This is a car for someone who dreamt of a Healey when they were young, and want the best version they can possibly have. They don’t make ‘em like they used to, but the fact that someone’s made one like this is no bad thing. 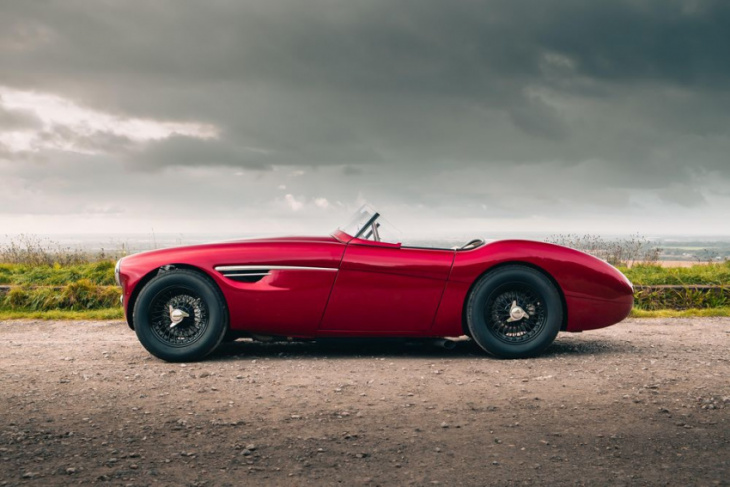 Keyword: This Austin Healey Restomod Will Cost You Nearly $500,000