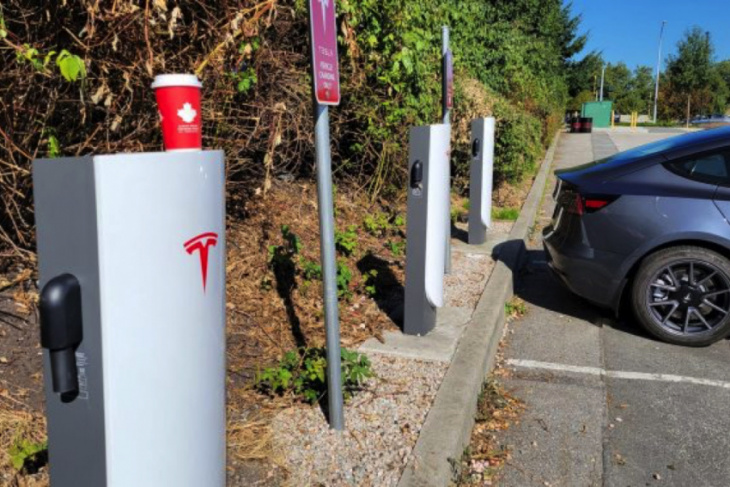 Tesla drivers looking to charge up in the Vancouver-adjacent city of Surrey, B.C. may have to queue a bit longer than usual this morning, after a number of cables were chopped off at the popular Surrey Guildford Supercharger station.

The 72-kW Urban Supercharger normally has around 20 spots for Tesla vehicles to recharge in, and that’s often still not enough, with line-ups often forming behind them. But as of yesterday morning, the total number of available stalls was down to eight, after somebody cut the cables near their base and made off with them, likely with the hopes of selling the copper inside to metal scrappers for a few quick bucks.

Seems a lot riskier than collecting pop bottles for the recycling depot, which also give money for metal, but maybe the thieves also have a vendetta against EVs, not unlike the many owners of gas-powered vehicles who occasionally ICE out the charging spots by parking in front of them and blocking access.

Drive Tesla Canada first reported the vandalism, including a photo of the now-wireless charging stations in its story – a Tim Hortons coffee cup perched ceremoniously atop one of them – taken by Tesla owner Rick Postma and originally shared to Facebook. Driving reached out to Postma for comment but has yet to hear back.

Sadly, Surrey is no stranger to this type of theft or vandalism, or crime in general. According to the global crime index, the city of over half-a-million residents is the worst in the country for crime. In fact, just earlier this year, another Supercharger in the city (South Surrey V3) had four of its cables lopped off while it was still under construction. In that instance, repairs were made quickly. For the sake of Surrey’s Tesla community, let’s hope the same happens here.