An overview of the 2023 Volkswagen Atlas 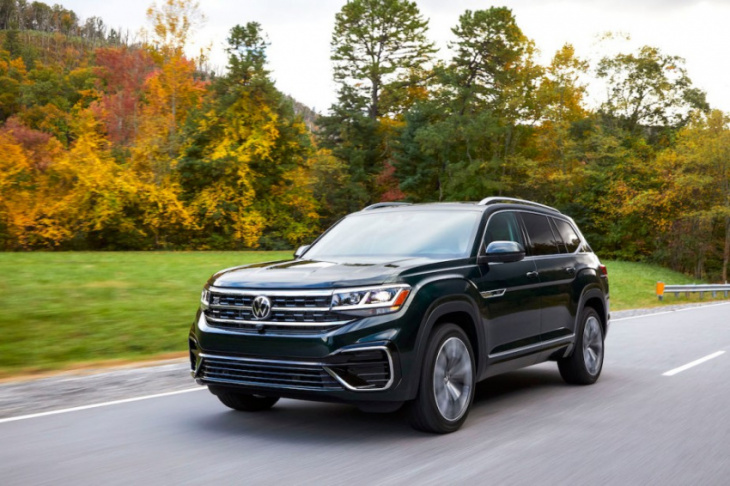 According to Consumer Reports, the 2023 Atlas will start at about $35,000, bringing many features to the table. The Atlas is a standard third-row SUV, meaning folks can seat up to seven people in the car. The Atlas starts with a 2.0-liter turbocharged four-cylinder engine that gets 235 hp, but Volkswagen also offers a V6 option. The standard four-cylinder gets about 24 mpg overall.

Despite its size, the Atlas handles it well. Its turning circle of 40 feet is “quite good.” On the interior, it doesn’t feel as upscale as other Volkswagen models do, but it still feels nice. Volkswagen gave the Atlas a 6.5-inch touch screen as standard, and a larger 8-inch touch screen is optional. The Atlas is also compatible with Apple CarPlay and Android Auto.

Additionally, Volkswagen gave the SUV a lot of smart safety features as standard. These include the likes of forward-collision warning, automatic emergency braking, and rear cross-traffic warning, among others.

The 2023 Volkswagen Atlas has this one big flaw

While Consumer Reports had a lot of positive things to say about the Atlas, the car critic also had one significant criticism of the Volkswagen SUV. This issue concerns the Atlas’ engines, particularly the fact that neither engine gives the car a good acceleration. Even when the Atlas is equipped with the optional 3.5-liter V6, which gets 276 hp, its acceleration is still weak compared to its peers.

When equipped with the V6, the Atlas took 8.7 seconds to accelerate from 0 to 60 mph. In comparison, the Toyota Highlander, a similar SUV in many ways, comes with a more powerful engine, thus, a faster acceleration time. The standard four-cylinder will have an even worse acceleration time, but it gets a better fuel economy than the V6. The Atlas’ V6 gets about 20 mpg overall.

This is what Consumer Reports liked about the 2023 Volkswagen Atlas

That was another area that the Atlas scored well on. A lot of three-row SUVs have some cramped seats in the third row. This is not the case with the Atlas, as its third-row seats are spacious and comfortable. The Atlas’ third row is even spacious enough for adults to sit in comfortably, and this is true for the other rows as well. This also means that owners can fold down the seats and access a lot of cargo capacity. Finally, the Atlas scored well in terms of its controls, which were described as easy to use.