The 2023 Volkswagen Atlas Cross Sport is the shorter, two-row version of the Atlas SUV. It was first released for the 2020 model year, so it doesn’t need any significant changes just yet. VW already made the 2022 model a better value with more standard features for multiple trim levels.

The folks at Consumer Reports will probably give the 2023 Volkswagen Atlas Cross Sport the same positive review as last year’s model. Unfortunately, this SUV has one annoying feature that CR couldn’t overlook.

What the 2023 Volkswagen Atlas Cross Sport has to offer 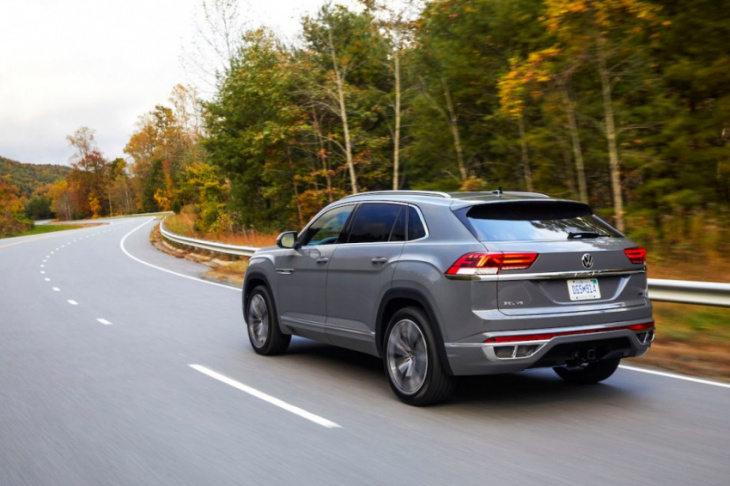 The Volkswagen Atlas Cross Sport’s base trim is powered by a 2.0-liter turbo-four engine capable of 235 hp and 258 lb-ft of torque. Drivers who want more power can opt for the 276 hp V6, and both engines come paired with an eight-speed automatic transmission. Unlike the three-row Atlas, you’ll have to pay extra for AWD on the Cross Sport.

The Volkswagen Atlas Cross Sport can comfortably accommodate five riders and has almost 78 cu-ft of cargo capacity. The base trim has a nice assortment of both convenience and safety features. The SE Atlas Cross Sport is also cheaper than the Atlas version by nearly $700, starting at $33,910.

The one thing Consumer Reports would change

Although it’s a compact SUV, the Volkswagen Atlas Cross Sport’s hood is longer than most of its peers. Paired with its wide stance, Consumer Reports says it’s difficult to park this SUV between two other vehicles. It’s also probably not the most ideal vehicle to park on a crowded street.

Additionally, the squared-off shape of the back window significantly limits visibility unless you rely on the backup camera. While the Atlas Cross Sport does a decent job containing its body roll, its avoidance maneuver speed (52 mph) might concern some drivers.

The Volkswagen Atlas Cross Sport might have a bulky exterior, but that also equates to ample interior space. The driver has a lot of room to move around and can utilize two-way lumbar support to adjust the seat. Outward views are compromised by the SUV’s huge hood area, but Consumer Reports says drivers will have no visibility problems with the side windows.

Consumer Reports also praised the Volkswagen Atlas Cross Sport’s easy seat access in either row. As for interior quality, test drivers were neither too impressed nor disappointed. Despite some cheap elements, everything fits together nicely and are a few upscale touches, like wood strips.

The Atlas Cross Sport’s suspension is somewhat stiff, but it does a decent job absorbing the most egregious bumps along the road. Consumer Reports was also satisfied with the power delivery of the standard turbo-four and the transmission, though the latter sometimes feels clunky. Interior and exterior noise levels are low inside this SUV.

The Volkswagen Atlas Cross Sport benefits from straightforward controls for its infotainment and safety functions. The display’s menus are easy to navigate, and CR appreciated the available shortcut buttons. The interface is controlled through a 6.5-inch or 8-inch touchscreen, depending on which trim you purchase.

Every climate feature also works without issue, though testers were slightly annoyed with the finicky main audio controller. Still, any of the Volkswagen Atlas Cross Sport’s minuscule flaws are outweighed by its great performance overall.