The VW ID.6 was developed exclusively for Chinese customers, where three-row SUVs are popular and electric vehicle sales are accelerating rapidly. As EV adoption across segments improves, the ID.6, which was launched in 2021, may sail to countries with an increasing demand for large SUVs. Or so it was thought!

Here’s everything you should know about Volkswagen’s three-row electric SUV and the possibility of it becoming a global model:

No plan for the VW ID.6 SUV in the United States

The VW ID.6 was seen as holding potential for the U.S. in 2021, but circumstances and strategies are vastly different now.

With the Inflation Reduction Act (IRA) signed into law on August 16, 2022, Volkswagen is unlikely to be interested in test-marketing the ID.6 in limited volumes imported from China and seeing its potential for local production. To be eligible for credits, among other stipulations, the final assembly of EVs have to be in North America.

Moreover, Volkswagen has lined up two new electric SUV launches in North America starting in 2026, as announced as part of the USD 7.1 billion investment in the region on March 21, 2022.

One of electric SUVs confirmed for North America (VW ID.8) is expected as a three-row family hauler of the same class as the ID.6, but designed and manufactured for the local audience. It could be a tempting upgrade for customers driving the Atlas.

Scout Motors established for the U.S.

If the aforementioned reasons aren’t enough indications for the ID.6 from not sailing to the U.S., take into consideration the Scout Motors launch. The newly established company’s sole purpose is big, brawny electric models designed for North American customers. It has already confirmed it will launch a large rugged SUV and start production in 2026. The teaser of the Scout electric SUV indicates it will be available with three rows of seats.

The ID.6 is the perfect example of how launch plans are subject to market forces. In 2019, citing Jürgen Stackmann, a report from Auto Express had stated that the ID.6 would be launched in the USA after China. Stackmann is the former BoM member responsible for Sales, Marketing & After Sales of Volkswagen.

Ralf Brandstätter, formerly the CEO of Volkswagen and now Volkswagen Group’s BoM member responsible for China Operations, told Autocar UK in 2020 that “there is a possibility” of the ID.6 for other markets. 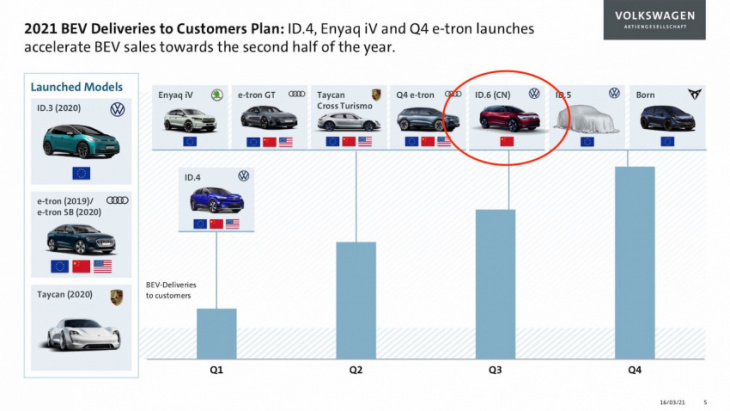 Dr. Dahlheim’s presentation indicates that currently there is no plan to launch the ID.6 in the United States. Image: Volkswagen Group

In a presentation on March 17, 2021, Dr. Christian Dahlheim, who was then Volkswagen Group’s former Head of Group Sales and is now Volkswagen Financial Services’ CEO, confirmed that the company is viewing the ID.6 as a China-only model, putting an end to the rumors.

The VW ID.6 was unveiled in China in six- and seven-seat configurations in April 2021. The VW ID.6 range includes an ID.6 X for the SAIC-VW JV company and an ID.6 Crozz for the FAW-VW JV company. As in the ID.4, Crozz would be the ‘global’ version if and when it is ready to ditch its China-only tag. 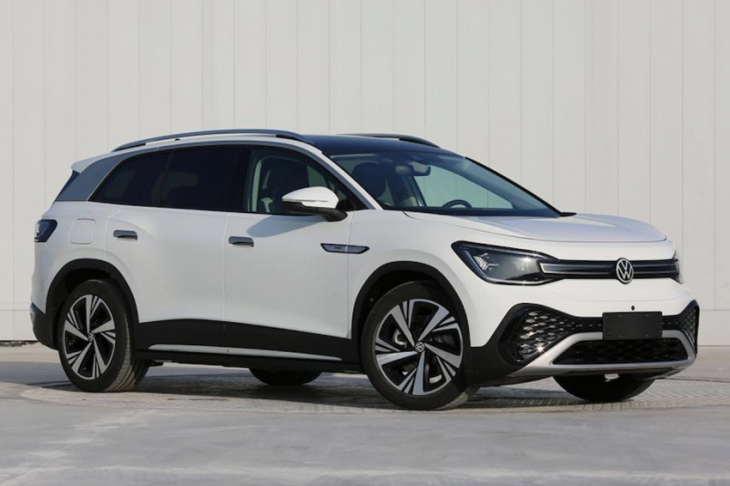 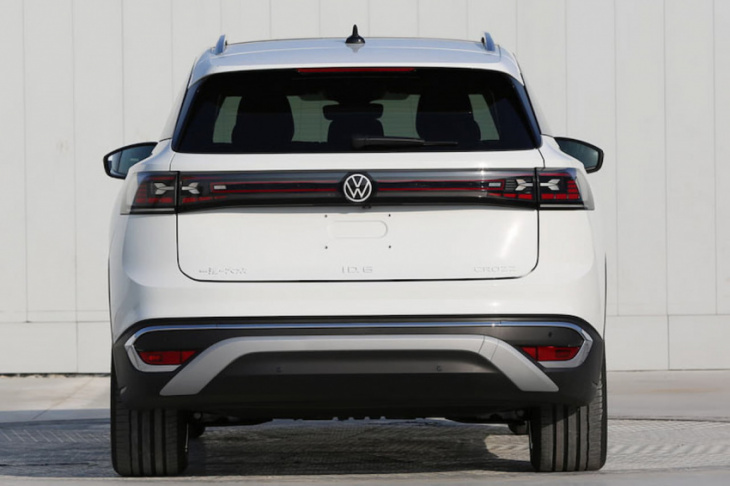 If it was brought here, the U.S.-spec VW ID.6 would have looked the same as the ID.6 Crozz. Images: miit.gov.cn

The VW ID.6 Crozz differs from the ID.6 X with simpler fascias. Similarly, it has an understated design, which should suit tastes better globally, if it ever goes global. The boxy headlamps provide a cooler styling to what could turn out to be the global ID.6. The upper grille is slimmer for a cleaner look, and unlike in the VW ID.6 X, merges into the headlamps. That said, the front bumper motif looks just weird and out of place. 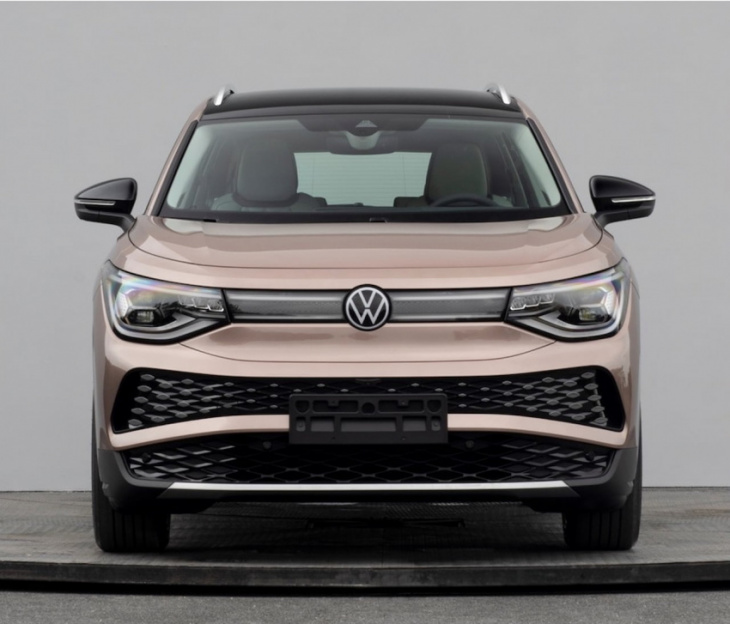 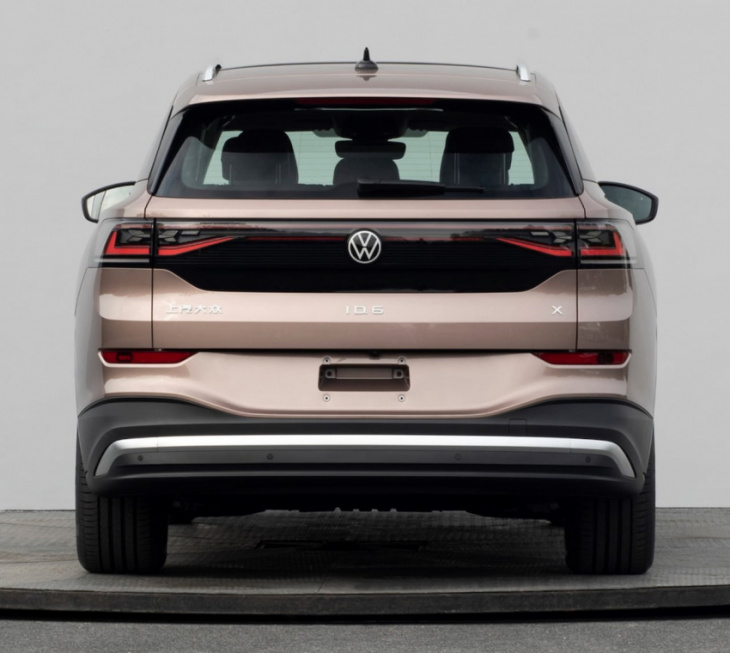 The ID.6 has large headlamps that look odd, but styling is quite similar to the VW ID.4 (including the VW ID.4 X). Images: miit.gov.cn

While the ID.6 Crozz has a ‘simpler’ styling, the VW ID.6 X exudes aggression. It has odd-looking taller headlamps but slightly better-looking fake grilles, along with heavy patterns in the lower portion. At the rear, there’s gloss black plating on the tailgate to mimic the styling of the VW ID.4 X, and the reflectors are horizontal units. It goes without saying that the bumpers are different from the donor model. The design recipe is modified to suit the taste of Chinese customers.

The VW ID.6 is the production version of the VW ID. Roomzz concept. Images: miit.gov.cn

The two ID.6 models adopt excellent aerodynamic design to achieve improved endurance and energy efficiency performance. The smooth roofline extends all the way to the rear and is connected to the spoiler on the upper part of the rear window, presenting an elegant, streamlined shape. This design can not only further reduce air resistance but also reduce wind noise. At the same time, the waistline design is simple and powerful and outlines a solid and wide side profile, highlighting the recognizable new body proportions of the ID. family models.

Volkswagen Group commenting on the design of the VW ID.6

The interior design of both ID.6 models is the same. The production version of the VW ID.Roomzz concept from Auto Shanghai 2019 is internally called ‘VW Lounge SUVe,’ which connotes the space levels on offer. The flagship ID series’s interior is focused on comfort, leisure, and practicality. The cabin space in the zero-emissions family SUV is better than that of the Tiguan Allspace. 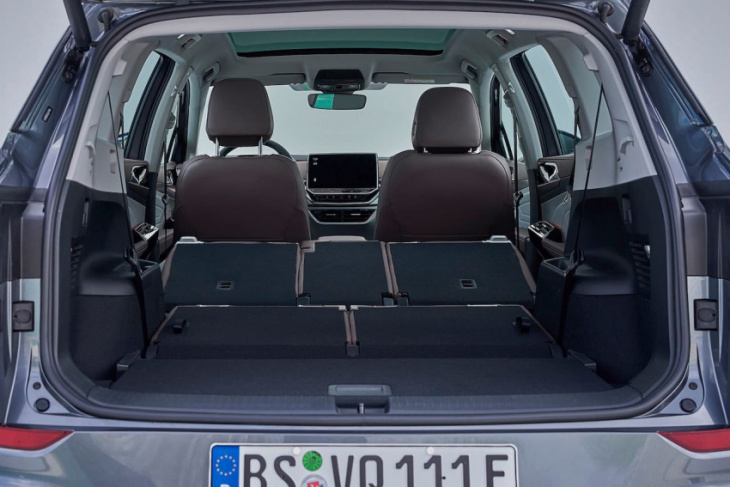 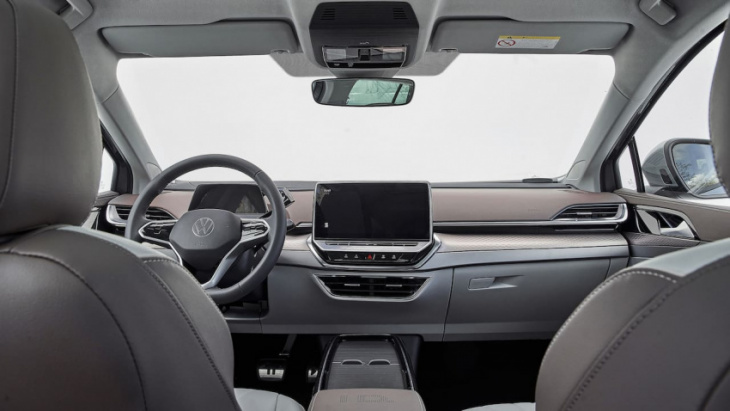 Volkswagen sells the ID.6 in multiple configurations with 58 kWh standard-range and 77 kWh extended-range battery pack options. The 58 kWh unit can deliver a range of up to 436 km (271 miles), while the 77 kWh unit allows a maximum range of 588 km (365 miles). Both range figures are as per China’s NEDC rating method. The VW ID.6 can be configured in single-motor rear-wheel drive and 4MOTION two-motor all-wheel drive configurations. 132 kW, 150 kW, and 225 kW are the power levels, and 220 Nm and 310 Nm are the torque levels. 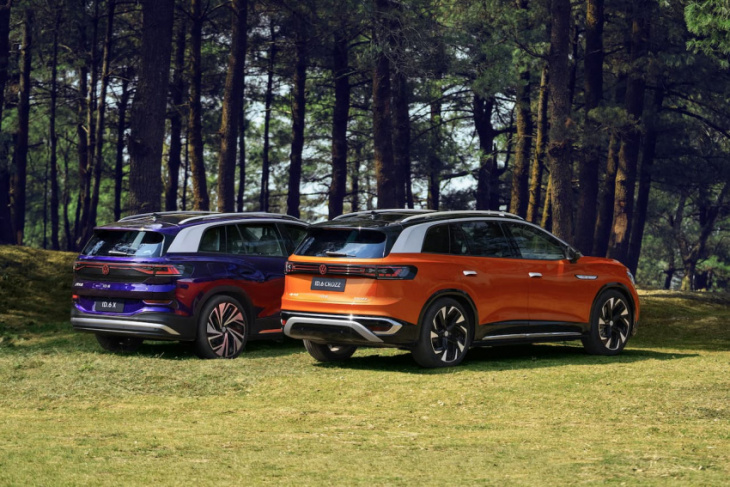 The official presentation of the VW ID.6 follows:

The VW ID.6 SUV, while holding potential in the global market, is likely to remain a China-only model. The U.S. should get newer ID. products, ones that are designed keeping in mind the needs and tastes of local customers from the outset.

What is the VW ID.6 SUV release date?

The VW ID.6 is now on sale in China, but there’s no plan to sell it in the United States.

What are the VW ID.6 SUV competitors?

The BYD Tang EV, Honda large SUV and the Hyundai Ioniq 7 are current and future competitors of the ID.6. 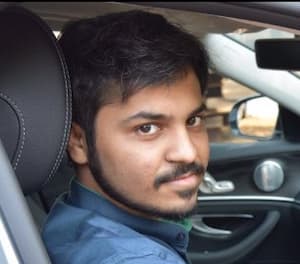 Keyword: The VW ID.6 SUV is unlikely to make it to the U.S. market