But the plans are not definite or imminent. 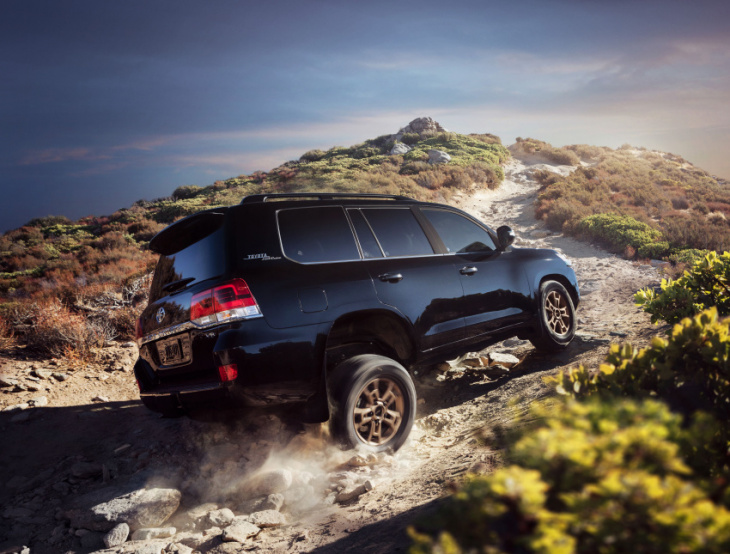 Toyota debuted the all-new J300 Land Cruiser last year. But the brand discontinued the model in America due to poor sales — leaving us with its luxury branded twin, the Lexus LX 600, and a revamped and more powerful Toyota Sequoia. But it appears the Land Cruiser is not dead in the United States. Jack Hollis, the head of sales for Toyota Motor North America, told Motortrend that the Land Cruiser nameplate would “likely” return to the U.S. at some point.

“Will we ever? I would say likely yes,” Hollis told Motortrend. “Obviously, Land Cruiser is such an important part of our heritage and has done such a great job. And I’ll be looking at it, absolutely. Have I seen designs, thoughts, and hopes? Yes. But nothing to announce. It’s still a ways off,” Hollis said.

The Land Cruiser nameplate and the current J300 Land Cruiser vehicle are two different things. Even if Toyota decided to import the Land Cruiser from Japan tomorrow, production capacity might preclude it from happening. In markets where it is available, the Land Cruiser has wait times of up to four years for delivery. “Still a ways off” probably means that decision is not happening tomorrow.

Most likely, Hollis is referring to a future iteration of the Land Cruiser in hypothetical terms. And with Toyota reportedly pivoting its EV strategy again less than a year after announcing a massive pivot to its EV strategy, that eventual vehicle will probably be quite different from the bloated, gas-swilling, nearly indestructible SUV enthusiasts love.

One can see why Toyota would consider reviving the Land Cruiser nameplate in America; it would draw immediate attention and interest. And an upmarket, three-r0w, off-road-capable heritage SUV should work. But Land Cruiser is also a nameplate that has come to mean something particular and special within the Toyota lineup. It’s not a nameplate Toyota will use lightly. And the arguments against bringing the current vehicle to America remain clear and compelling.

Keyword: The Toyota Land Cruiser Will Likely Return to America

The Toyota brand isn’t just about comfortable and reliable motoring. The automaker’s GR series of cars is designed from ground up for serious driving enthusiasts Toyota may be a Japanese car maker that’s often associated with very practical family cars by much of the masses, it’s also got a ...


View more: Get To Know The Sporty Toyota GR Series