How capable can a performance SUV really be? 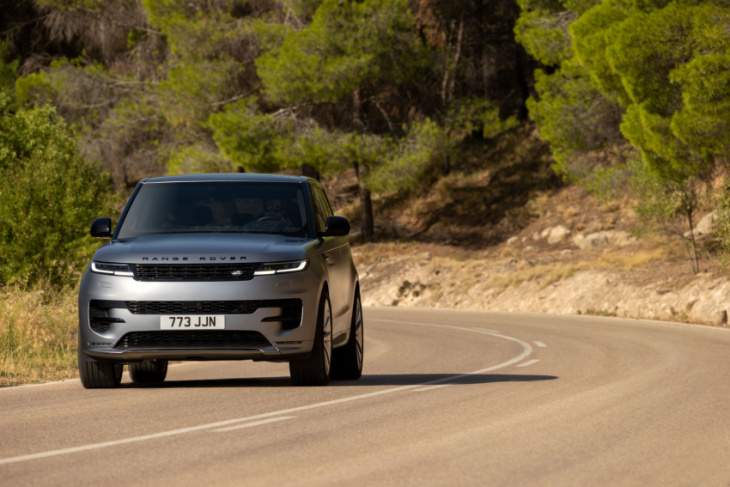 Let’s face it: Performance SUVs and crossovers have gotten out of hand. From the 290-mph red-light racer Jeep Trackhawk to the corner-carving Porsche Macan GTS, the performance and capability of these vehicles are astounding given they were, frankly, never intended for extreme g-forces or drag racing McLarens. If the plan all along was to pick up the kids, toss their backpacks and a few snacks in the trunk, and hit the long, straight, and boring highway, how have we strayed so far from it?
Cynics and purists will tell you American consumers have simply become accustomed to the amenities provided by an SUV. Additional cargo space, adequate legroom, and generally higher safety ratings all add to the affability of the popular shape, but the rise of the performance SUV is owed to more than market consensus. In fact, it’s largely because these models are meeting or exceeding a performance benchmark set by the likes of sport sedans and hot hatchbacks. And of these models, one brand in particular stands out as the purveyor of a certain cache, dating back to 1948. 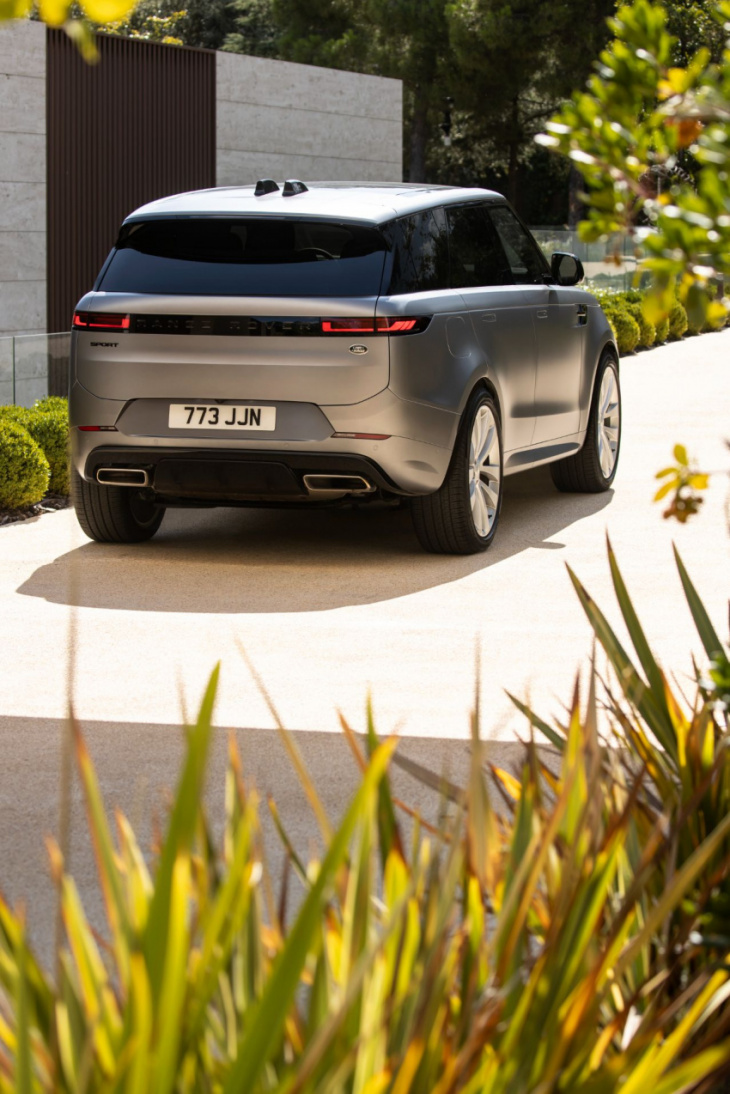 The new rear end design of this P400 model shows off what the designers called an air of “tautness”.

We’re talking about Land Rover and its infamous Range Rover SUV, a model that has long been the standard for luxury SUVs. But the company understands not everyone can shell out a starting price of $104,000 for the Range Rover, bells and whistles included. That’s why Land Rover has crafted a lineup of Range Rovers that are more accessible, starting with the $46,000 Evoque and heading up to the $60,000 Velar. Between these two reasonably priced models and the namesake version sits the Range Rover Sport, a slightly paired down variant with a focus on driver engagement starting at $83,000.
Freshly redesigned for the 2023 model year, the Range Rover Sport will come to the US in two forms: a V8-powered P530 First Edition starting at $122,850 and a range of hybrid inline six-cylinder-powered models starting at $83,000. Autoweek got to drive the boisterous turbocharged V8 and the dynamic packaged P400 hybrid I6 models in Madrid, Spain, where a group of motorcyclists led us to the twisty roads to learn just how sporty a Range Rover could be. 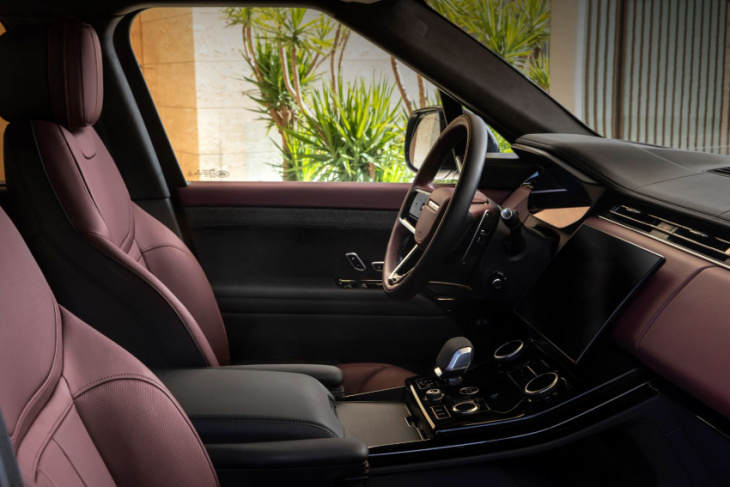 A slimmed down center console holds an array of haptic climate control knobs.

Time was spent in both the Range Rover Sport First Edition P530 and the Range Rover Sport Dynamic SE P400, reflecting the range of V8 and MHEV I6 drivetrains. The two models sit on the same chassis with the same air suspension, though power figures are quite a bit different. Sporting a 4.4-liter turbocharged V8, the P530 makes 523 hp and 553 lb-ft of torque while the electrified I6 in the P400 produces 395 hp and 406 lb-ft. With sticker prices of $122,850 and around $99,000, neither the P530 nor P400 were on the cheap end of the Range Rover Sport spectrum.
Navigating out of Madrid’s Centro, the maneuverability and steering weight was a standout facet of the sport models. A fancy four-wheel steering system combines with an active e-differential and torque vectoring system to tailor the 5000-pound SUV’s weight to each and every driving circumstance. In practice, the systems function without thought on the road, allowing for confident maneuvering through tight city alleys and requiring minimal movement to change lanes or dive into sharp curves. Steering feel was largely nonexistent, an industry standard as a result of electric power steering, but the adjustable steering weights were well-tuned across an array of drive modes.

Changes are made to the double-wishbone front and five-link axle rear air suspension depending on the drive mode, namely an adjustment in the characteristic Range Rover float that makes it so comfortable on highway trips. The stiffened air suspension reduces body roll while the weighted steering helps keep steering input smooth. Sweeping corners and modest s-curves carried us into the Spanish countryside and both models took to a spirited pace.

The brakes are strong and the pedal feel is sharp without being overly sporty. This is not a car that eggs you on corner after corner, but the combination of active electronic chassis systems and a well-tuned steering rack make it amenable to a lively pace. It’s worth noting the P400 MHEV I6 model was significantly less nose-heavy during corner entry and braking, making it a more balanced driving partner. 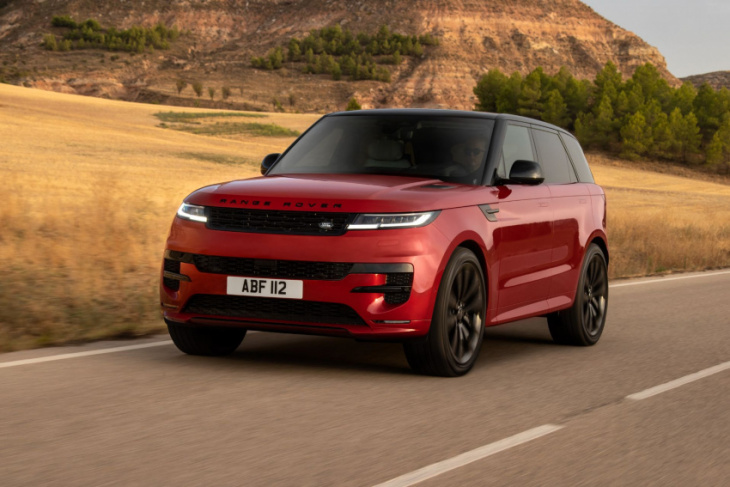 It seems only natural that the turbocharged V8 P530 model would be displayed in Firenze Red.

The 3.0-liter hybrid inline six-cylinder was our favorite powertrain, even up against a stout 4.4-liter turbocharged V8 that delivered a wallop of silky torque in just about every gear and eagerly squatted when you mashed the accelerator. It did everything a V8 should do. But it didn’t seem to match the characteristics of the Range Rover Sport, a model that balances dynamics with refinement. The hybrid six embodies these principles, quietly propelling the boxy model sound only to launch into a singing inline six wail when instructed to. Ditching the V8 for the I6 creates a deficit of power but, frankly, the stellar sound insulation and sheer road presence of a Range Rover defeats any external semblance of speed. The V8 is modern and produces ample power, but we’d go with the I6.
Being a Land Rover means a few things, namely that poshness is paramount. But that doesn’t mean the company has lost its off-road heritage. Even with a mammoth set of 23-inch wheels, the folks at JLR sent us off on a genuine trail complete with vertical drops and slippery hill climbs. Drive modes are available for any type of terrain (grass, dirt, ruts, rocks, snow, etc.) and the e-diff is ultra-intelligent, locking and unlocking in seconds as speeds, slippage, and steering angles change.

Other off-road features include a number of clearance cameras, hill descent control, and a form of off-road cruise control which all make treacherous obstacles a breeze for even the most timid of drivers. Considering a single-digit percentage of owners use their Range Rover off-road, Land Rover could easily do away with the cost of making these vehicles so capable, but that would insult the Land Rover name. 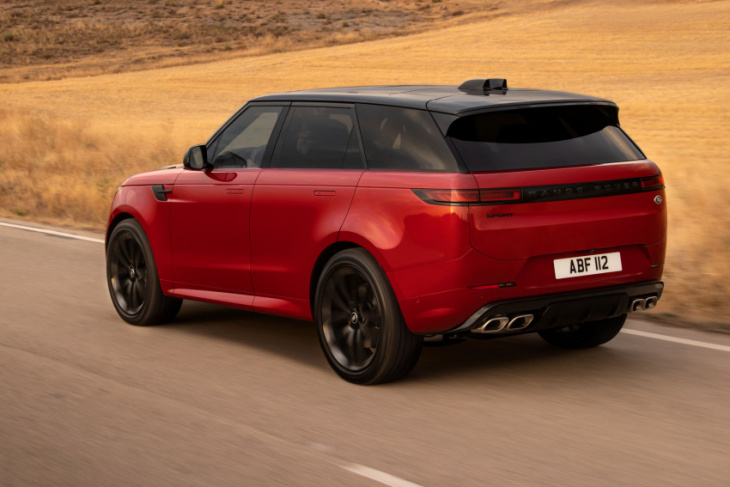 The Range Rover Sport can adjust its ride height for the task at hand, allowing for a 2.6-inch raise in off-road scenarios.

Predictably, the interior of the Range Rover Sport is a comfortable, quiet place to be. The seats are adjustable in 20 different ways and were heated and cooled in the models we drove. Buyers have the choice between traditional leather or sustainable upholstered materials for their seats, and it would be hard to choose incorrectly.

Getting the hang of the 13.1-inch curved touchscreen Pivi Pro infotainment system and climate controls takes a few minutes but they are pleasant once you do. The driver’s instruments are shown on a 13.7-inch digital display that is customized based on the driving mode you’re in, a feature that is largely effective. The key is in the details with Land Rover, with features like a factory-installed cargo net to keep your premium leather luggage from jostling around in the trunk. 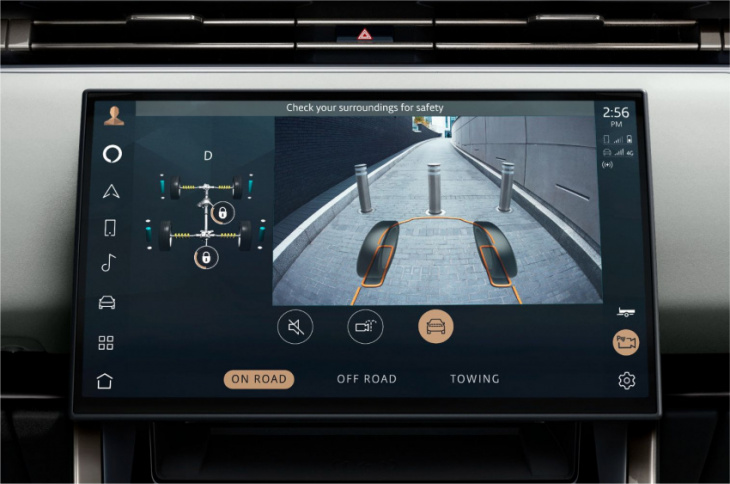 A series of on-board cameras make tight alleys and narrow trails a breeze, showing everything from bumper distance to steering lock.

The Range Rover Sport isn’t a pure performance machine like the BMW X5M or Jaguar F-Pace SVR alongside it. While the novelty of a track-bred SUV drives smiles and good reviews, years of lavish consistency is a strategy that works for Range Rover. Make the Range Rover Sport too cheap, too loud with fire shooting out the tailpipes, or too visually gaudy and you lose a basis of otherwise loyal clients.

JLR wants a piece of the rambunctious sport SUV segment, of course, but it doesn’t want to give up the sophistication that comes with the Range Rover name. And why should it, especially when the Sport models can sell for as much as the original? For our money, however, the ’23 Range Rover Sport Dynamic SE P400, or any of the I6 models, seems to walk the perfect line between accessible performance and pricing that’s less than a traditional Range Rover.

All-New 2023 Range Rover Arrives In The Philippines With A Starting Price Of P 15.990M

Singapore – The automotive world hasn’t been immune to its share of ‘disruptions’. The interpretation of luxury motoring has evolved with the zeitgeist: Big money is now in younger hands and more importantly, the traditional trappings of success – such as large lux-limos and their ilk that so impressed earlier ...

U.K.-based Warrantywise, a used car warranty provider, has used their quantifiable data to name the most and least reliable cars based on warranty claims and the highest cost of repair. Only including cars that are less than ten years old, outside of the manufacturer’s warranty, and discounting models with ...


View more: Land Rover Range Rover vs. Mercedes-Benz GLS: How Do These Luxury SUVs Match Up?

For when you want to one-up your ultra-rich friends


View more: The Carmel Edition is the most expensive Range Rover…ever

Range Rover watch out, Skoda’s coming! This is the Czech company’s new Vision 7S electric SUV and, as these first images confirm, the new look is far more aspirational than anything with a Skoda badge before. And you’d better like it because this is the flagship of a brand-wide design ...

Car warranty provider Warrantywise has named the UK’s ten most unreliable cars, with the last-generation Range Rover ranking last due to the SUV’s high repair frequency and high repair costs. Warrantywise, which is also one of The Car Expert’s commercial partners, collected the data from 131,000 policyholders on vehicles up ...

Avoid the most luxurious models


View more: Range Rover is UK’s most unreliable used car, with poor showings from Porsche and BMW too

Is the new Range Rover worthy of its royal status?

This Range Rover Fell Off a Truck

Is a Land Rover Range Rover Sport expensive to maintain?

The 2022 Range Rover Is a Greatly Improved Transporter of Gods

Own a Toyota RAV4? A Range Rover? Look out for the Tyre Extinguishers Flattening Tires