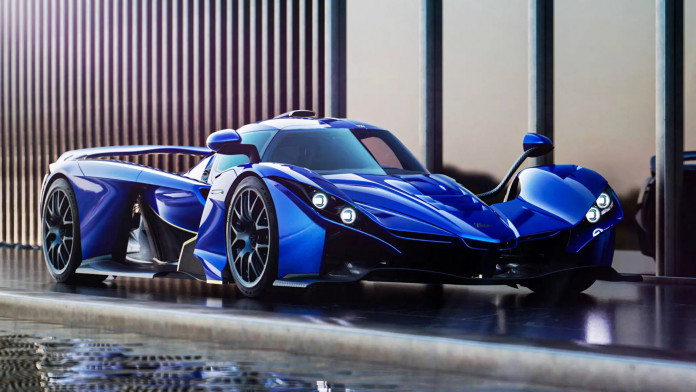 Still in the final few months of development, the Nissan GT-R-powered Praga Bohema hypercar has been unveiled by the Czech Republic race car manufacturer. It will be the brand’s first road-legal car and only 10 units will be made in 2023 with the following four years seeing a production volume of 20 per year. The cost of the Bohema is 1.28 million Euros (approx. RM6,024,149).

We’re not kidding when we say the Praga Bohema is powered by a Nissan-sourced engine. Mounted in the middle of the Bohema is the Nissan PL38DETT 3.8-litre twin-turbo engine that has been tuned by Litchfield Engineering – a performance-tuning company based in England.

Nissan supplies its engine to Praga for the Bohema and Litchfield Engineering does the following adjustments:

Since the Praga Bohema is in its final stages of development, its performance numbers have yet to be confirmed. Although Litchfield Engineering has a history of tuning the 3.8-litre Nissan engine to 1,000 hp, the targetted numbers for the Praga Bohema are 700 hp @ 6,800 rpm and 725 Nm @ 3,000-6,000 rpm.

Mated with the Nissan-sourced engine is a race-derived semi-automatic gearbox. More specifically, it is a Hewland sequential gearbox with a ‘robotic’ clutch to allow for semi-automatic driving mode. Interestingly, all power is sent to the rear wheels only and Praga claims that the Bohema can accelerate from 0 to 100 km/h in under 2.3 seconds. That’s almost as fast as purely-electric hypercars like the Rimac Nevera and Pininfarina Battista.

As for driving dynamics, the Praga Bohema rests on a fully independent suspension setup with push rod-operated adjustable dampers. The wheels are 18 inches in front and 19 inches in the rear, although the car can also run an 18-inch all-around setup. Behind the wheels are 380-mm carbon ceramic disc brakes with 6-piston callipers. Rubbers on the Bohema are a set of Pirelli Trofeo R tyres.

The exterior of the Bohema doesn’t suggest any relation to its Japanese engine supplier with its crazy aero and wild racecar-like design. And it isn’t farfetched to call the Bohema a racecar. Even the tagline on the Praga website reads “The simple fact that you can drive a race car on the road is enough”.

The chassis is a rigid carbon fibre monocoque and attached to the chassis are lightweight carbon fibre outer panels. The front top panel covers the suspension, with subtle bulges to accommodate the horizontal dampers. At the rear, a single panel covers the engine, transmission, and suspension. Praga says the Bohema’s rear spoiler provides over 900kg of downforce at 250 km/h.

Inside, Praga provides a decently luxurious cabin despite the racecar-ness of it all. Praga even says that adults measuring close to 2 metres tall can also fit in its first hypercar thanks to the fully-adjustable driver’s seat.

Like the chassis and panels, the interior also gets the carbon fibre treatment with 56 individual carbon fibre parts. The targeted weight for the cockpit is 34 kg.

Production of the Praga Bohema will begin in the second half of 2023 with a targeted production of 10 units in its first year. In the following four years, Praga targets to build 20 Bohemas per year in the Czech Republic.

Be sure to get a smartphone pic, or your friends will never believe what you saw.


View more: A Spotter's Guide to the Rarest and Most Exotic Hypercars