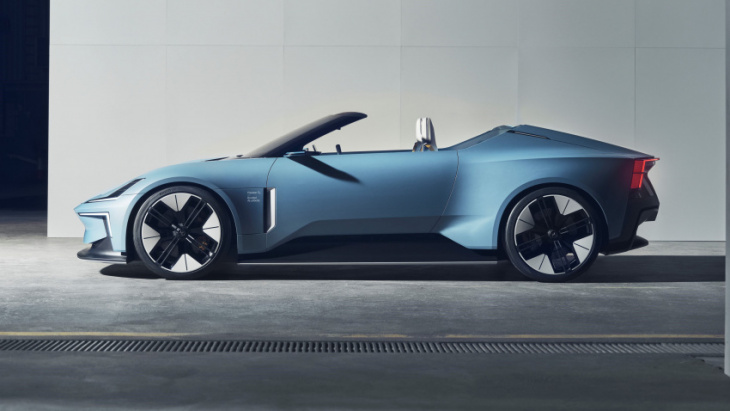 The Polestar 6 roadster, the production version of the O2 concept that’ll debut in 2026, will be offered with a range of powertrain options, not just the halo 872bhp dual-motor spec estimated to cost €200,000.

And Polestar boss Thomas Ingenlath also told TopGear.com that even though that indicated price hasn’t yet been finalised, orders for the first 500 launch cars – the LA Edition – have nearly all been accounted for.

“The Polestar 1 was obviously a very, very clear run of 3 x 500 cars, it was never a big industrial process, it was always a fairly hand-built car,” he said. “This car [the Polestar 6] is part of the factory setup, it is definitely something that we rather think of producing not hundreds of cars per year, but thousands.

“And therefore it will have a range with different drivetrains and that is all to come in the next three years. But it will not just be this exclusive edition, it will be part of our products that offer a variety of prices and drivetrains,” he added. Which means lesser-powered variants will of course be cheaper.

But Ingenlath notes that the tech spec of the Polestar 6, and its competitive set, warrants a high tag in any case. “Look at the horsepower you’re getting, what momentum… I mean, why should we give away the car for free?”

That tech spec is quite extraordinary. The 6 will use the bonded aluminium platform that’ll see service in the Polestar 5, and the top trim will feature an 800-volt architecture, dual motors and 872bhp. In the 5, that’s good for 0-62mph in 3.2s.

“If you look at the competitive set then that is a very realistic price for a roadster with that tech sheet. So I think that is absolutely fine,” Ingenlath added.

Because the Polestar 6 is the company’s halo car, one that represents what it’s all about, there won’t be a scaled-down version of the roadster – say like an electric MX-5 sized car. “That’s not necessarily the scope of the Polestar brand,” he said. “We created this bonded aluminium platform which is in the premium segment at the very top. Here we are competing with the Porsche 911 and that type of car.

“And immediately when you ask that question [about a cheaper electric roadster] you have to have a different, cheaper, simpler technology in your hand in order to make it feasible. That chassis [of the 6] is simply that much more premium.”

Could be a premium sound to accompany it, but not one that’s obtrusive. When asked if the Polestar 6 could get an augmented soundtrack – what with noise being an essential part of the roadster experience – Ingenlath said yes, but with a caveat.

“I would support the thought that there has to be some audible feedback on you accelerating and pushing the power. We are actually working on that with our electric engines, really tuning the sound in order to give you that feedback.”

There’s no intention to ‘disturb’ people, however, and he spoke of having to ‘readjust’ the scale of what you hear in a roadster. “When you’re used to really loud noise, then you’re suddenly on that level.

“But when you tune it down, the world becomes a more quiet place, then you hear things that you didn’t hear before.”

Keyword: The Polestar 6 will be offered with a range of powertrain options


View more: Polestar says nearly half of all Australians favour ICE ban by 2035

Electric Prices and specs for the hotly-anticipated Polestar 3 have leaked ahead of schedule, and the numbers are… big We were expecting some Polestar 3 news early this autumn, but not this early: prices and performance details for the brand’s “SUV for the electric age” have leaked online. Get ready for ...

Polestar 2 price hike possible off back of China increase