The Only Driver Who Has Driven DPi Cars From Every Manufacturer

Four manufacturers have fielded cars over the course of six seasons of DPi competition: Cadillac, which has achieved 27 race wins and three driver’s championships to date; Acura, with 16 wins and consecutive titles in 2019 and ’20; Mazda, notching seven wins; and finally, Nissan, which took four wins in 2017 and ’18, launching the IMSA career of future champion Pipo Derani.

Only one driver has raced in all four DPi cars: Olivier Pla. And while professional ethics (not to mention non-disclosure clauses in contracts!) prevent the 40-year-old Frenchman from specifically analyzing the pros and cons of each of those four machines in a public forum, he was kind enough to discuss the general challenge of learning and adjusting to the different racing cars.

“It’s actually interesting going from one car to another because you always learn something and it’s an interesting process,” Pla remarked. “These cars are very sophisticated, with a lot of electronics and settings that can affect the engine specification. It’s a lot of information to learn, but it’s our job. You really have to adapt quickly.”

Pla’s first DPi experience came in 2018 with Nissan, when he ran three endurance races for the Tequila Patrón ESM team. It wasn’t a huge adjustment for the veteran sports car pilot. He was already quite familiar with the Ligier Le Mans Prototype 2 (LMP2) chassis that the Nissan was based on. DPi rules stipulate the use of a homologated LMP2 chassis combined with an outside manufacturer’s engine and unique bodywork.

Pla and his teammates failed to finish any of his three races in the Nissan.

“I knew that car quite well because the chassis was a Ligier similar to what I had driven for many years,” he said. “The engine had a lot of power, but the reliability was the weakness of that car. And of course, that’s one of the biggest things!” 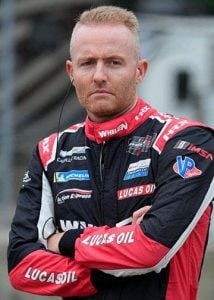 Pla made eight endurance race starts for Mazda Team Joest in 2019 and ’20, teaming with Jonathan Bomarito and Harry Tincknell to score the marque’s first DPi win in the Sahlen’s Six Hours of The Glen in 2019. Paired with Oliver Jarvis and Tristan Nunez, he claimed second place in the 2020 Rolex 24 At Daytona and third place that same year in the Mobil 1 Twelve Hours of Sebring Presented by Advance Auto Parts.

The Mazda years demonstrated the similarities and differences between DPi entries to Pla.

“Every car feels very different,” he said. “Some immediately feel good with your driving style, and with others, you have to work more to adapt how you drive the car. There are cars I really loved in the past, and some I really hated. Some cars have very efficient aero but maybe less mechanical grip, whereas others might have a lot of mechanical grip but less efficient aero. It’s always a question of compromise.”

When the Mazda DPi program downsized to a single car following the 2020 season, Pla signed with Meyer Shank Racing with Curb-Agajanian to run the No. 60 Acura ARX-05 DPi with co-driver Dane Cameron. Their best finish was second at Watkins Glen. Joined by Juan Pablo Montoya, they also finished third at Sebring.

This year, Pla was brought in mid-season by Action Express Racing to bolster the No. 31 Whelen Engineering Racing Cadillac DPi-V.R attack with defending DPi champion Derani. A third-place finish at Canadian Tire Motorsport Park is the duo’s best placing to date through four races together.

Pla hinted that adapting to the Acura was the most difficult of the DPi cars.

“The Acura had a really tight cockpit, so I was not really feeling comfortable,” he said. “The Cadillac cockpit feels huge, and I have more space for my legs. I’ve found the Cadillac quite simple and easy to learn, because some of the cars I’ve driven in the past were much more difficult in terms of the electronics and such.

“I really love the Caddy,” he continued. “It’s still very new for me, and it’s tough to arrive in the championship mid-season with a new car and a new team. Detroit (his first race) was tough, but at Watkins Glen especially, I did more mileage in the car and started to feel more comfortable. It’s a big learning process, but every lap or every mile I do in the car is a benefit for me. Pipo, my teammate, has spent the last four years in this car, and he has been really helpful. It just takes some time.”

The experience of driving all four DPi contenders gave Pla renewed respect for the task faced by IMSA officials in their quest to create a level playing field for different cars through Balance of Performance.

“To match the performance between four different cars is almost impossible, because a lot of it depends on the type of track,” he noted. “Some cars are just going to be faster than others. BoP doesn’t always work positive for you. Sometimes you know you’re going to a place that is not going to be good for your car, but maybe next week, it’s better. You have to make the most of it.”

Pla will have one more chance to chase success in the Cadillac at Motul Petit Le Mans.

Keyword: The Only Driver Who Has Driven DPi Cars From Every Manufacturer