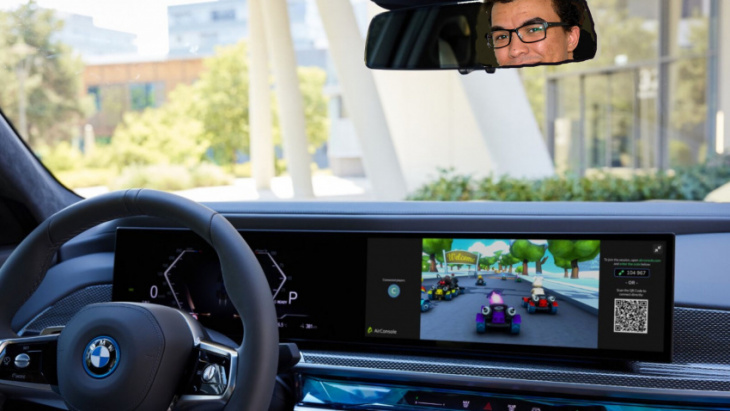 Are you tired of fighting tooth and nail for a PS5? Wouldn’t you like to leave the fist fights and public brawls behind in favour of a more adult, more refined gaming experience? Well BMW, of all companies, may be your answer brave wanderer. Starting next year, owners of these fancy, expensive cars will be able to play a variety of games from inside their shiny rides. Hopefully not while driving… Unless you wanna take your gamer credentials to a whole other, almost certainly illegal, level.

This doesn’t mean that you’ll be able to plug a Dualsense or Xbox pad into your car. No, instead the new gaming collection will be played via a connected Smartphone and the in-built Curved Display. The official press release states that the partnership between the BMW Group and Airconsole (who is responsible for the phones-as-gamepads tech used) will “bring casual gaming into new BMW vehicles”. So Mythic WoW Raiders, Warzone demons, and Rocket League zoomers may not be the target audience here.

The recent Mario Movie trailer caused some uproar, so we added original VO Charles Martinet’s voice back in!

Looking at the AirConsole website, it’s clear this is the responsible family’s gaming option. Titles like Brawlanders, Golfriends, Monkey Business and almost 180 more titles clearly appeal to a younger crowd who’d otherwise be causing havoc in the back seats. However, Drunk Casino is the clear winner for me, and sounds like the perfect title for me while I’m headed to work. If I owned a BMW, or a car, or could drive.

Stephan Durach, senior vice president of BMW group connect company development and lover of lengthy titles writes in the official press release: “With AirConsole we will leverage innovative technologies combined with a broad variety of fun and multiplayer games. This will make every waiting situation inside the vehicle, such as charging, an enjoyable moment,”

Anthony Cliquot, CEO of N-Dream, the company behind the AirConsole brand: “We are extremely proud to spearhead gaming inside vehicles with BMW and are excited to create new games for in-car entertainment. Our ingenious architecture coupled with the ease of access of our platform will change the way people get entertained in their vehicles.”

I for one am incredibly excited for the increased uptake in car gaming — I’m being 100% serious too. Think of all that down time you usually spend in the passenger seat of cars, looking outside at nature or run-down town centres, or socialising with friends and family. How I wish, as a child, I could have been practising combos or doing my WoW dailies instead of any of those awful things.

But what do you think? Are you a BMW owner excited for this new feature coming to your very lush, lovely, expensive car? If you are, did you know that you could support VG247 for only £1 a month? You clearly have enough cash, so give us some.

Keyword: The next big video game platform? Your BMW, apparently