Toyota launched a new Land Cruiser for 2022. A complete redesign, the new 300 Series replaces the 200 Series, which dates back to 2007. The new Land Cruiser retains the essence of “reliability, durability, and off-road performance” but with more refined on-road handling. By all accounts, it’s a great vehicle worthy of the Land Cruiser name. However, there is just one problem—you can’t buy it in the U.S.

It’s easy to lament the fact we don’t get the new 300 Series Land Cruiser, but the reality is only 3,711 people bought the 2021 Land Cruisers. However, the new Toyota 4Runner has been a great contender. However, can it replace the Land Cruiser? 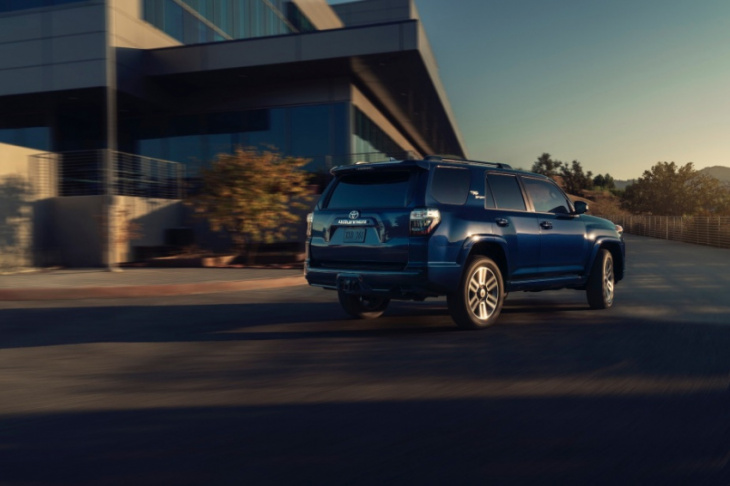 The 2023 4Runner remains largely unchanged from previous years, with the exception of a 40th Anniversary Special Edition model. Toyota saw no reason to mess with the recipe because the 4Runner remains a strong seller with loyal buyers.

However, speculation is that an all-new 4Runner will launch late next year as a 2024 model. According to Torque News, the new 4Runner will continue as a body-on-frame vehicle for rugged offroading and offer styling that blends aspects of the current 4Runner with the new 300 Series Land Cruiser. Engine choices are expected to match the current Sequoia, which switched to the turbocharged i-Force Max 3.5-liter V6 in 2021.

Torque News asked people what they wanted in the new 4Runner. The responses included:

The original 4Runner had a removable hardtop, a four-cylinder engine, and five-speed manual transmission. A manual transmission may be unlikely, but it is still available on the current Toyota Tacoma with one of the TRD packages. If Toyota decided to launch a new 4Runner with these options, it would not only appeal to the die-hard fans but offer serious competition to the Ford Bronco.

Where does the Sequoia fit in?

In the U.S. market, Toyota is positioning the 2023 Sequoia as the Land Cruiser’s replacement. It shares the same platform as the new 300 Series Land Cruiser and features more muscular styling. It’s also built in the U.S. and positioned to compete with vehicles like the Chevrolet Tahoe and Ford Expedition. To compete in that class, you have to have lots of amenities, a good infotainment system, roomy third-row seats, and a good tow rating.

We think the Hybrid model is one of the best non-luxury large SUVs on the market. It offers all of these features, and can outmuscle and outlast the competition.

How Will the new Toyota 4Runner and Sequoia Replace the Land Cruiser?

The 4Runner and Sequoia are two completely different vehicles intended for two different market segments. By eliminating the Land Cruiser, Toyota has improved its U.S. lineup. Instead of offering three SUVs that compete against each other for market share, it has two that appeal to separate types of buyers.

The 4Runner appeals to people who are serious offroad enthusiasts. It competes with the Jeep Wrangler and Ford Bronco and has a long history with a cult following as a vehicle that will go anywhere. While it is smaller than the current Land Cruiser, the 4Runner’s durability and offroad capabilities should attract people who previously bought Land Cruisers for those attributes.

The Sequoia is geared toward people with large families or who want a large SUV with a good towing capacity. It’s a better fit for the U.S. market that loves trucks and favors roominess, and features over offroad capability. According to Newsweek, Toyota thinks the new model is competitive in this segment and wants to triple sales over the previous model.

If you must have a Land Cruiser because of its offroad capabilities, Lexus will sell you one. It doesn’t have the Land Cruiser nameplate but shares everything with its Toyota twin. Sometimes referred to as the “Lexus” Land Cruiser, it’s called the LX 600.

Keyword: The New Toyota 4Runner May Try to Fill the Hole Left in Our Hearts by the Loss of the Land Cruiser

Toyota Land Cruiser: Which generation of this SUV is your favourite

Why Can’t You Buy a New Toyota Land Cruiser SUV?

How Much Can the Toyota Land Cruiser Tow?