The Mustang Dark Horse Projects 500 Horsepower and Lots of Thrills 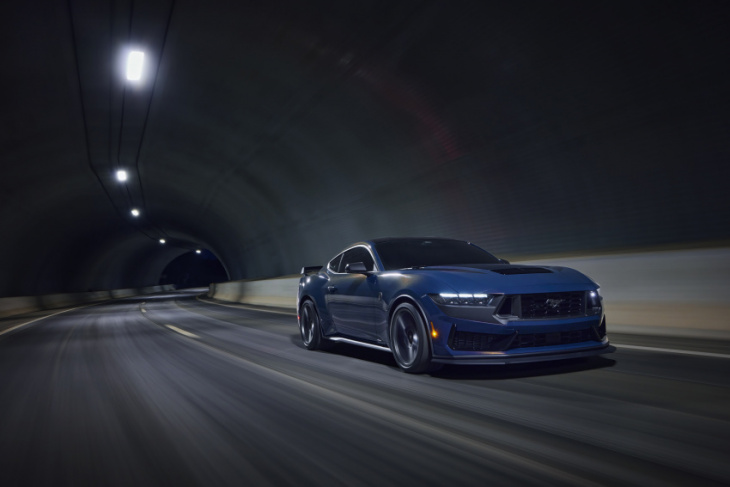 During last week’s unveiling of the 2024 Ford Mustang, four ponies glistened underneath the spotlights of Hart Plaza. The typical Ecoboost, GT and GT Convertible were joined by a fourth silhouette: the Mustang Dark Horse.

The Dark Horse is the first new performance series ‘Stang in 21 years, going back to the 2001 introduction of the Mustang Bullitt. This new creature is both street and track-capable, packing a little more potency under the hood. 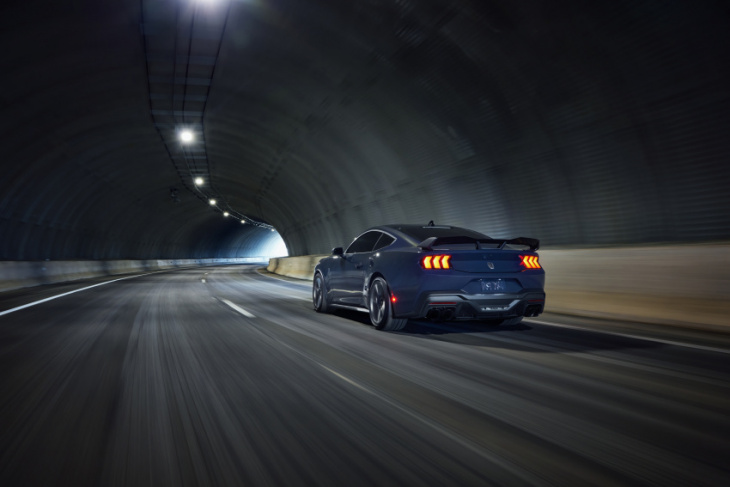 At its core is a 5.0-liter Coyote V8 engine, which has now entered its 4th-generation for this 7th-generation pony car. Thanks to some special modifications, including piston connecting rods borrowed from the GT500, the Dark Horse is aiming for a projected 500 horsepower. Sending that to the rear wheels is a standard six-speed TREMEC manual transmission, similar to what was seen on the GT350 and, more recently, Mach 1. The 10-speed automatic is also available, though the TREMEC is also equipped with a special transmission cooler. Speaking of cooling, the Dark Horse stays chill through brake cooling NACA ducts, an auxiliary engine cooler and rear axle cooler. The exterior changes are mostly obvious: more black across various trimmings (like the surrounding headlight graphics) and the trim-exclusive logo. A Dark Horse exclusive metallic paint, Blue Ember, served as the debut hero color, and for a little more contrast, various applied and painted graphics will be available. An optional Appearance Package will feature Notorious Blue-colored Brembos and a Grabber Blue logo.

The Mustang Dark Horse is an exciting entry in Ford’s pony car legacy. While we suspect the regular Mustang GT (and, heck, even EcoBoost) will be plenty fun, we can’t wait to grab the Dark Horse reins. Stay tuned to MotorWeek for our inevitable rundown of the 7th-gen Mustang!