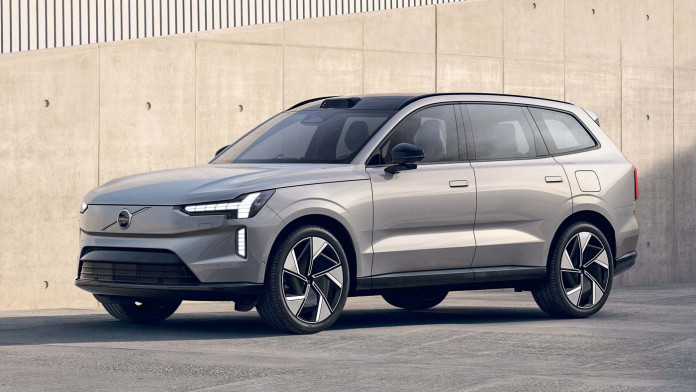 Volvo aims to become a fully-electric carmaker by 2030, and today, the Swedish carmaker unveiled its next big step in making its ambition come true. This is the Volvo EX90, the fully-electric counterpart to the massively-successful XC90 flagship SUV, and it’s got big shoes to fill.

And it’s doing so with a very familiar look, with a design that can be described as more of an evolution than a revolution. It still largely retains the same proportions that emanates presence on the road, as well as the same Volvo design elements, including the lighting signatures both front and rear.

With that being said, they’ve all been reworked with a futuristic touch that looks right at home in a modern, fully-electric SUV. The Thor’s Hammer daytime-running light signature physically opens up to reveal the “1.3 megapixel” headlights behind it, while the vertical tail lights have now been broken up to include the separate lighting elements into the rear windscreen itself.

The front fascia also gets a new unique appearance without an upper grille, but most importantly, the Volvo EX90’s silhouette is also a lot more rounded around the edges, to help bring the drag coefficient down to just 0.29 Cd – pretty impressive for a large seven-seater SUV.

Hiding under the familiar appearance, however, is a brand-new architecture that allowed Volvo to stuff 111 kWh of batteries underneath the floor. The electrons drive – at least at launch – a duo of electric motors, delivering 380 kW (517 hp) and 910 Nm of torque to all four wheels.

Volvo says the batteries in the EX90 also offers up to 600 km of range on a single charge, and can be refilled with DC power at up to 250 kWh, giving you 180 km of range in 10 minutes, or charging from 10-80% in roughly 30 minutes. The batteries can also be used for “bi-directional charging”, or in simpler terms, a powerbank for your other electric devices, your home, and even another electric Volvo car.

It’s also a similar story on the inside, where the design is still unmistakeably Scandinavian, just with a much more modern twist to it. The dashboard, which was already unveiled earlier, is mostly distilled into two screens, measuring 14.5-inch on the central vertically-oriented display, and a slim horizontal bar for the instrument cluster.

Aside from the screens, Volvo also highlighted the new illuminated wooden veneer on the dashboard, which acts as ambient lighting at night for a sci-fi-esque look, alongside the glass-topped volume knob, and a “reference-quality” Bowers & Wilkins Dolby Atmos sound system that even includes additional tweeters in the front seats’ headrests.

Volvo says the EX90 is its most technologically-advanced vehicle ever made, with a digital platform that “grows” with the user. The screens inside runs on Snapdragon Cockpit Platforms using Unreal Engine’s 3D tech for graphics, with Google apps and services built-in as before.

But more importantly, the entire car is powered by a pair of Nvidia Drive AI platforms and a Snapdragon 8155 processor, which ensures the car has “exactly the amount of computing power [it] needs for the future”, allowing the EX90 to get better over time via regular over-the-air software updates, not just in terms of software features, but also in its safety capabilities too.

That’s because the digital stack also powers the Volvo EX90’s safety sensing technologies, including a myriad of exterior sensors and radars, cameras, a new lidar sensor on the roof, and even new interior sensors, looking directly at the drivers.

Volvo says the system will get smarter and safer over time as the AI learns from new data gathered from the aforementioned sensors, and will respond to small objects “hundreds of metres ahead”, or when it detects that the driver has become inattentive, taking necessary actions be it during active or autonomous driving.

All in all, Volvo says the new safety systems on the EX90 can reduce serious accidents by up to 20%. Meanwhile, the lidar sensor is also “hardware-ready” for unsupervised driving in the future, which will be enabled via software updates when the software and legislations catch up.

Although the Volvo EX90 follows in the footsteps of the XC40 Recharge and C40, it truly feels like a brand-new start for the Swedish carmaker in its pursuit to becoming fully climate-neutral by 2040. Expect to see many – or most – of these new features and car-making ethos being passed down onto future models, which they’ll be unveiling one new electric model per year. Sit tight – it’s going to be a wild ride.

Keyword: The fully-electric Volvo EX90 flagship SUV is a “computer on wheels”