The Ford Mustang Mach-E Managed to Get More Towing Power 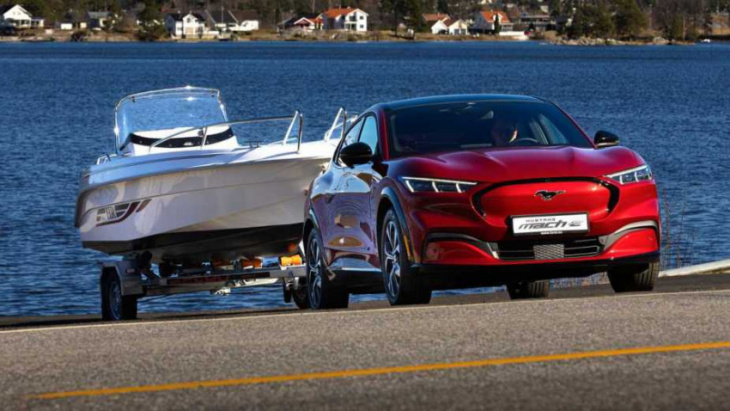 The towing capacity for the 2023 Ford Mustang Mach-E depends on where you live. The Mustang Mach-E currently isn’t rated for towing in America. But in Europe, the electric Mustang can tow up to 3,306 lbs.

You need to equip your ride with the extended-range battery and all-wheel drive to achieve this number. Also, the towing capacity increased from 2,204 lbs, so it’s a significant boost. The increased power cam from an over-the-air update.

But why can’t it tow in America? The manual still says it’s not approved for towing trailers. However, you can use it to tow small boats in other countries.

Well, it turns out that the Mustang Mach-E is slightly different in Europe. Engineers were involved with putting their marks on the steering, suspension, AWD system, and stability control.

What’s new for the Mustang Mach-E in America?

The American 2023 Ford Mustang Mach-E got a slightly better range. The Premium models come with the extended-range battery and have an estimated range of 306 miles with RWD. This is an increase of a whole three miles.

But the AWD version has an EPA-estimated range of 290 miles, which is an increase of 13. According to MotorTrend, the standard battery still has the same range. It gets about 247 miles with RWD and 214 miles with AWD.

The Mustang Mach-E Select, the base model, provides 266 hp and 317 lb-ft of torque with RWD. Upgrading to AWD increases this figure to 428 lb-ft of torque. The premium model cranks out 346 hp, and the torque remains the same, regardless of the battery.

With a DC fast charger, you can replenish the battery from 10 to 8- percent in about 45 minutes. A Level 2 charger will add about 30 miles per hour, which is up from 20.

You can add the Nite Pony package for a unique look. Reportedly, it costs about $800. It comes with 19-inch black wheels, black door cladding, dark front, and rear lower fascias, black side mirror caps, and black badging. 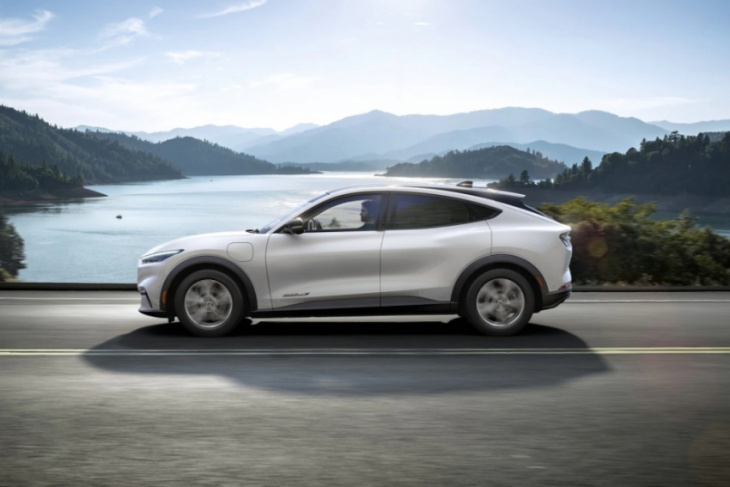 Other than that, there are minor changes, such as a fixed panoramic glass roof replacing the black painted roof GT models. There are new shades of Carbonized Grey Metallic and Blue Vapor Metallic paint too.

The price increase is reportedly due to supply chain constraints and increased material costs. But perhaps we wouldn’t mind it so much if it could tow in America.

The all-new Mustang GT gets another race car guise, set to compete at the 2023 Australian Supercars Championship.

Ford has unveiled its all-new Mustang GT Supercars race car which will compete in the 2023 season under the new Gen3 regulations. The new model is the first seventh-generation-based Mustang race car in the world. And thanks to the Gen3 rules, it is more closely related to the road-going version ...

What does Ford ST stand for? The 2023 Ford Edge ST is expensive but quick (for an SUV) The Explorer ST is a seven-seat hot rod What were the original Fiesta ST and Focus ST? Enthusiasts bowed their heads for a minute when Ford stopped making the Ford Focus ...

Ford F-150 Lightning. Source: Ford Iconic American automaker Ford announced this week that it has tripled electric vehicle (EV) sales in the United States during September, led by the F-150 Lightning pickup/ute. As is being seen around the world, total car sales for Ford in September were down overall. ...


View more: Ford triples EV sales in the US, led by F-150 Lightning

Ford is raising the price of its base electric truck model, the F-150 Lightning Pro, by $5,000 as the automaker fights through lingering supply chain disruptions and rising input costs. A day after releasing its September US sales report, which showed significant interest (+197.3% YOY) in the automaker’s electric ...