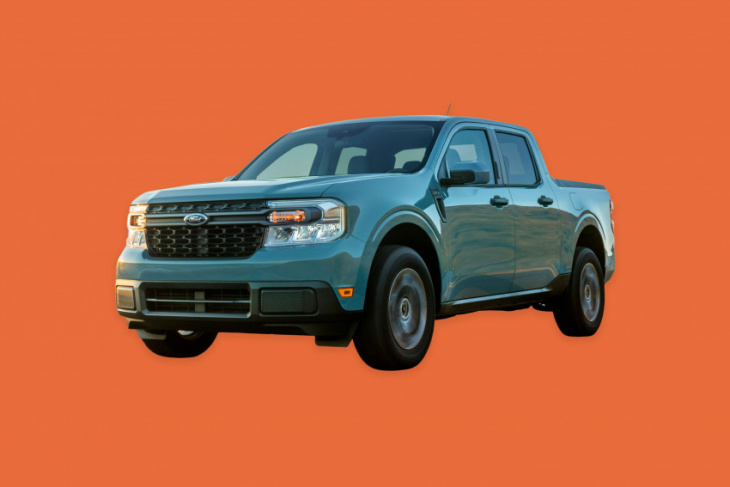 It was pretty much clear from the get-go that the new Ford Maverick was going to be a success. After all, it’s been obvious for years that the winds have been blowing away from sedans, wagons and hatchbacks and towards SUVs and pickup trucks —a move that has also had the effect of pushing average new vehicle prices upwards. Adding a new truck that’s priced like a compact car was so obvious, it’s hard to believe it took so long for brands to try it.

Still, even Ford might have been astonished by just how many people have taken to their new truck. Supply chain constraints have bottlenecked inventory, but even so, the fact that the second model year’s production was all spoken for within a span of a couple weeks proves there’s an insatiable demand for this pint-sized pickup.

And while most buyers are likely choosing the still-reasonably-priced versions further up the ladder, after spending a week with the very base model truck — the Maverick XL Hybrid, equipped with no options — I was shocked at how much it has to offer for a vehicle that costs less than $22,000 out the door. While it lacks one key feature that I personally would want for my money — more on that in a second — it’s otherwise a remarkably flexible, convenient and handy vehicle, especially at such a remarkable price.

The Maverick XL looks great, especially for a basic vehicle 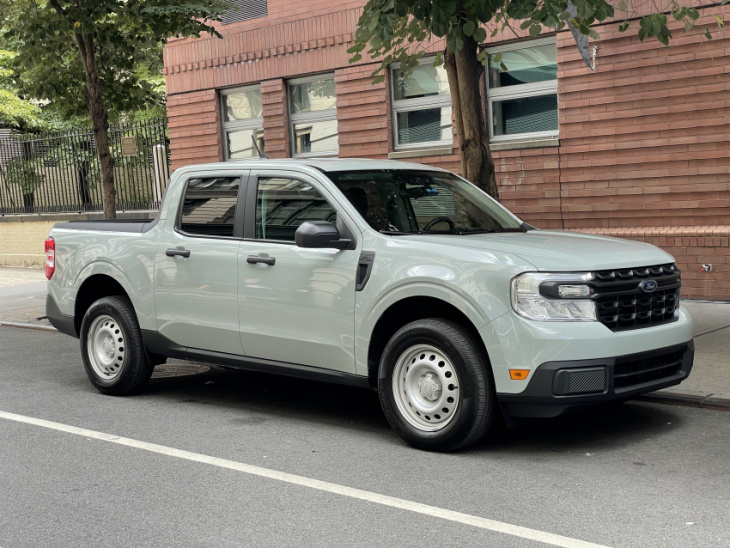 Uncovered steel rims undoubtedly look great on the Land Rover Defender, but I’d argue they look just as good here on the Maverick — giving it an all-business look. That’s not to say the Maverick XL has the look of a stripped-down work truck, however; while there’s some black plastic cladding outside, it’s blended in well with the overall design — making it look strong, not cheap.

The Maverick Hybrid is surprisingly fun to drive 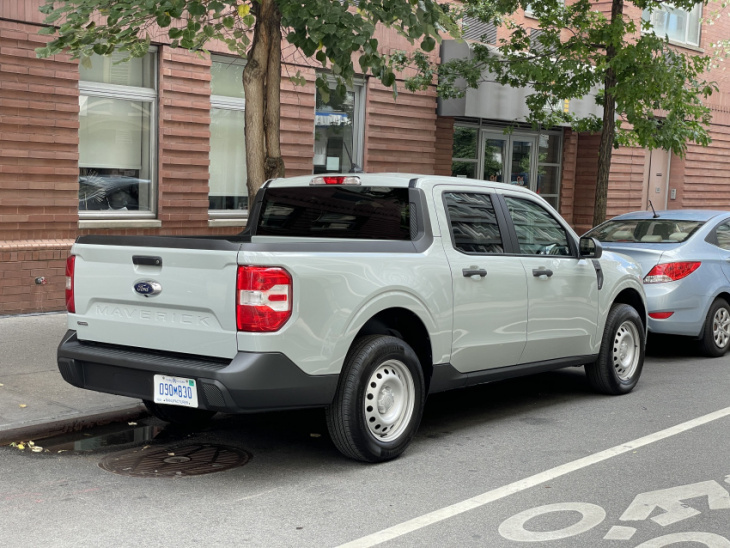 A hybrid inline-four, a continuously-variable transmission and front-wheel-drive doesn’t exactly sound like a recipe for an entertaining drive, but in the real world, the Maverick Hybrid is an unexpectedly spirited performer. The electric motor-and-2.5-liter-inline-four combo pair together to give it ample scoot off the line — more than its 7.7-second 0-60 mph time (as tested by Car and Driver) might lead you to believe.

The Maverick is just-right sized for many people 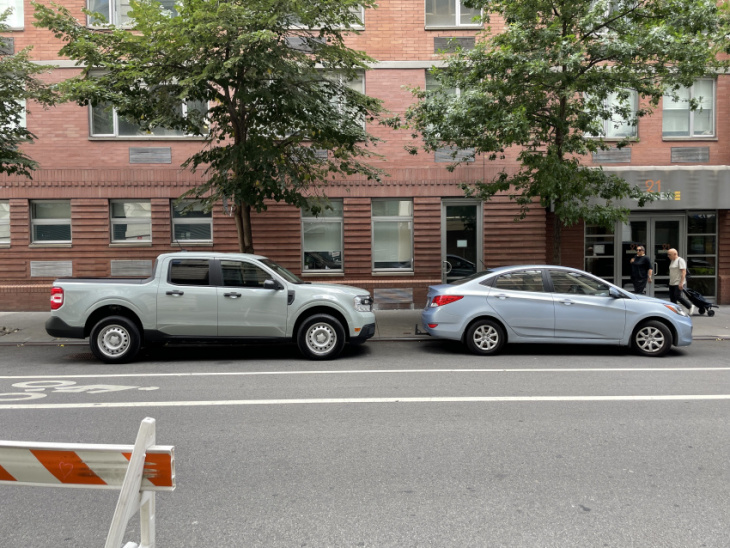 Living in Manhattan, dealing with traditional pickup trucks can be, to say the least, frustrating — in particular when it comes time to park. The pint-sized Maverick, however, suffers few such issues; as you can see above, it’s not that much longer than a sedan.

The interior is certainly tighter than the crew cabs you’ll find in full-size pickup trucks, which offer leg- and headroom that would make a Maybach feel embarrassed. I suspect it’d be able to fit a baby seat back there — though maybe not every baby seat, especially if you have the front chairs pushed back — and it would certainly be usable for most kids up to the point of high school. I suspect most buyers will be more likely to use it for incidental transport and frequent cargo storage, however.

And while most trucks and many SUVs these days stand high enough to make entry and exit a literal multi-step process, the Maverick sits at a level that allows most people to simply slide in and out. That’s been the appeal of many crossovers for years, of course — but the Maverick does one better, by making it equally easy for most people to reach down into the bed and fish out items. (Anyone who’s ever struggled to extract gear from the front end of a pickup bed can understand exactly how much nicer the Maverick makes things.) 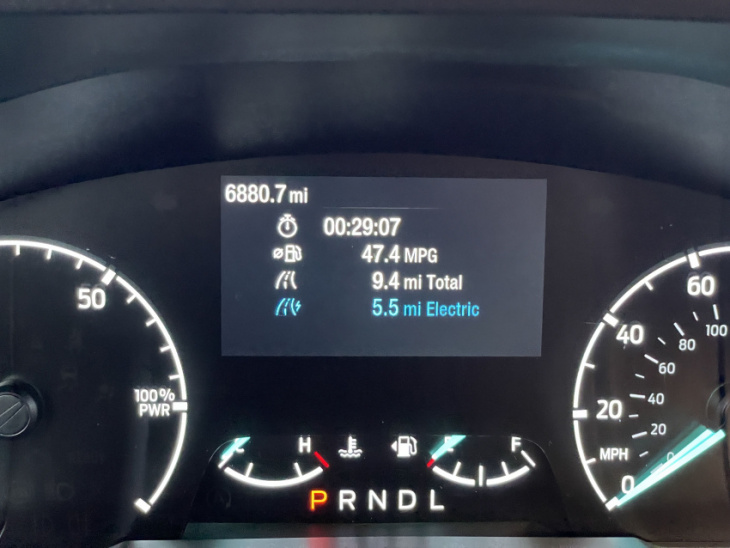 Take another look at that trip computer image above. 47.4 miles per gallon. In a pickup truck.

Granted, that was achieved over half an hour of what could be considered ideal conditions for a hybrid: in the city, with a mix of stop-and-go driving and 45-mph cruising on the highway. Even so, for city dwellers and suburbanites, it’s fairly typical for many commutes. If your daily roundtrip drive involves less than 25 miles of moderate to heavy traffic, it’ll take you a month to empty the gas tank.

Perhaps more indicative was the trip odometer reading I toggled over to at the end of my drive. It hadn’t been reset after the last couple of loans to other journalists, so it showed the records of the last 25-and-a-half hours of driving — 782 miles’ worth. Over that span — at triple the average speed measured in the above results — the Maverick Hybrid had averaged 40.4 mpg.

The Maverick XL has (almost) everything you need

Ford fans know XL doesn’t stand for excellent, but rather, well, basic. It’s the base level in Ford’s sometimes-confusing trim hierarchy, which starts with alphanumerics (XL, XLT) and then transitions over to proper names (Lariat, King Ranch, Platinum, Limited, etc.).

Yet while it may be the base model, the Maverick XL doesn’t lack for comfort features. Power windows, keyless entry, automatic climate control, a touchscreen infotainment with Apple CarPlay, Bluetooth connectivity, dual USB ports — they’re all here. Granted, that’s fairly true across the industry in 2022, but it’s a nice reminder of the difference between the features you want and the ones you really, truly need out of a car.

Even beside that, the Maverick XL also shows that a cheap car doesn’t have to feel cheap. Sure, there’s plenty of hard plastic found inside, but that’s true of Fords costing twice the price. The cloth upholstery is plenty nice for the price, however, and the clever interior design with its prevalence of pockets for just about everything makes using the interior a delight in the real world.

And while the Maverick lacks a traditional trunk, the bed does come with both tie-downs and slots designed to convert pieces of lumber into cargo dividers and simple racks, thus making it a little easier to place gear back there without it rolling around. (I’d still recommend a tonneau cover of some type if you plan on storing valuable items back there, however, just to keep them out of sight.) 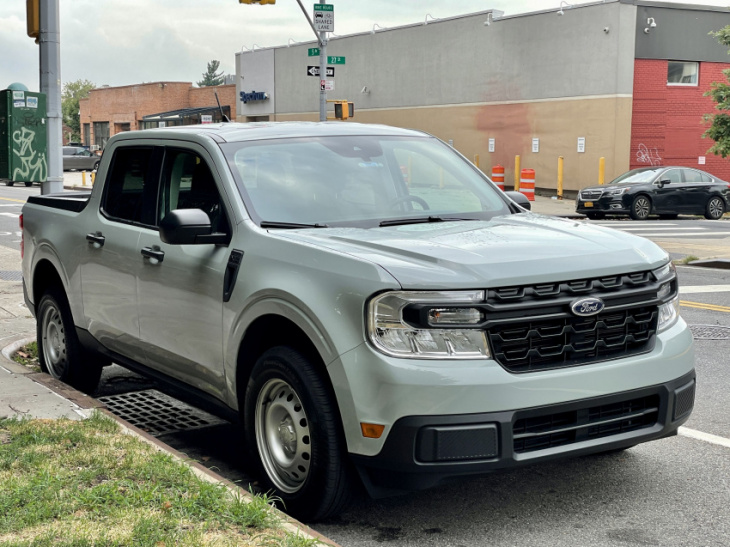 There’s only one thing that could make the Maverick Hybrid even better: if you could have the gas-electric powertrain and all-wheel-drive. Sadly, it only comes with front-wheel-drive; if you want four-wheel grip, you have to go for the Maverick with the 2.0-liter turbocharged inline-four, which makes significantly more power but doesn’t rack up the impressive fuel economy numbers of the hybrid.

That seems likely to change eventually. While the mechanically-similar Ford Escape crossover offers AWD with the hybrid powertrain, the Maverick’s hybrid system is different enough that creating an AWD version right off the bat was, according to a Motor Trend report, more than the brand was willing to tackle for launch.

Still, given the demand for all-wheel-drive in basically everything these days, it seems like a layup. I even found myself idly wondering if Ford could even use a system like Toyota does in its AWD Prius, where a small second electric motor drives the rear wheels at low speeds for added grip in those conditions when you really need it.

For now, though, I’d just plan on getting an AWD EcoBoost version if I lived north of the 40th parallel. Or rather, I would, if Ford had any more Mavericks left to sell. Maybe by the time inventory levels return to pre-pandemic levels, Ford will have rolled one out… 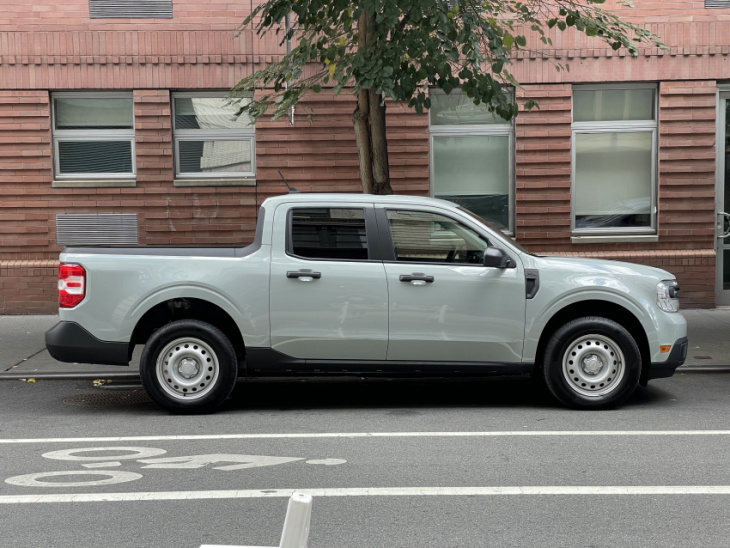 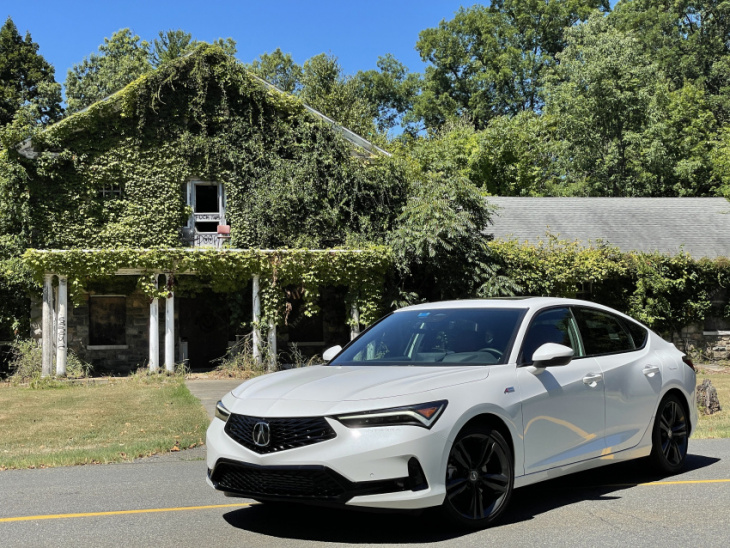 The reborn Integra has divided plenty of people…including our own staffers.

Keyword: The Ford Maverick XL Is a Working-Class Hero, and I'm Kind of Obsessed